Back to overall Teacher-research for Difficult Circumstances project (2016–2018)

A Handbook for Exploratory Action Research, by Richard Smith and Paula Rebolledo (2018), was published by the British Council in January 2018 and is freely downloadable (click on the title here). Reviewed in: ELT Journal , Fortell, Innovation in Language Learning and Teaching, English Australia Journal, Voices and Argentinian Journal of Applied Linguistics

Richard Smith gave an introductory webinar on Exploratory Action Research for UNRWA teachers in Gaza on Sunday 2nd September, 2018 at the invitation of the Hands Up Project. Part 1: https://youtu.be/57Z2P08pTvo. Part II: https://youtu.be/TpHL5ui0luo

Mentoring Teachers to Research Their Classrooms: A Practical Handbook, by Richard Smith, was published by the British Council, Delhi, in January 2020 and is freely downloadable (click on title for book and reviews).

In this approach (Exploratory Action Research), teachers carry out small-scale, practically useful research in order to understand a given situation (a problem, a puzzle or even a success) and, on that basis, plan to bring about change.

The notion of 'Exploratory action research' was developed in the context of advisory work for the still-ongoing British Council Chile / Ministry of Education Chile Champion Teachers Action Research Project (2013--present). The project has increasingly become embedded within the Chilean Ministry of Education's overall approach to continuing professional development for teachers of English in secondary schools, to the extent that it is now being referred to as a 'programme'. It also forms the basis for mentoring schemes being organised by the British Council in Uruguay and Peru (both, 2016 onwards), and - from 2018 - additionally in Colombia and Mexico. The Exploratory Action Research approach has also been adopted for mentoring schemes organized by the British Council in India (AARMS) and Nepal (AARMS-Nepal), as well as for the TESOL Electronic Village Online on 'Classroom-based research for professional development' in January–February, for two years running in 2017 and 2018.

[T]he project provides a model that is both contextually relevant, and intuitively appealing to teachers, both veteran and novice. In this sense, we can say that it is a truly innovative endeavour, one that should be communicated more extensively.

Doubts have previously been expressed – and continue to be expressed – about the feasibility of teacher-research forming part of ordinary teachers’ lives [...]. At the same time, teacher-research has been viewed as a particularly valid means for teachers to generate appropriate methodology in difficult circumstances (Smith 2011), and its wider transformative potential has long been recognized. My principal concern when responding to the challenge presented by the Chile project was, then, to recommend realistic procedures which would take full account of probable obstacles (cf. Smith, Connelly and Rebolledo 2014: 116), which would not add significantly to teachers’ existing burdens, and which would, indeed, need to be built into teaching schedules of up to 40 lessons a week in situations where class sizes of 40 or more were quite normal. I hoped – more positively – that the approach would be experienced by busy teachers not only as viable but as practical and useful. Indeed, it would need to be seen from the outset as something which offered hope in difficult circumstances, not as yet another imposition in a long line of inappropriate in-service interventions.

[T]he exploratory first phase which justified use of the adjective ‘exploratory’ before ‘action research’ can be seen to involve extensively clarifying the existing situation – the nature of a given ‘problem’ or other issue – before any action for change is conceived and undertaken. In diagrammatic form, the difference between ‘conventional’ action research (as this is often presented in texts and training programmes) and exploratory AR can be conceived of as follows:

Alternatively, Exploratory Action Research can be pictured like this (Smith & Rebolledo 2018: 27):

[A] dominant theme in final reflections was that participants had learned to listen to their students more, and that doing exploratory research had thereby fulfilled a valuable pedagogical function which plunging immediately into the ‘action’ part of action research might not have fulfilled to the same extent. Overall, then, we feel we succeeded in developing innovative ways of making teacher-research appear feasible as well as desirable in teachers’ eyes, in apparently very unpromising conditions. [...] Our experience suggests that the success or otherwise of initiatives to engage teachers in teacher-research may depend largely on what kind of teacher-research is introduced to teachers, how it is presented to them, how it is supported and what style of sharing of the research is expected.

Five cohorts of teachers have now passed through the programme, with the Ministry of Education in Chile becoming increasingly committed to its management and to dissemination of the notion of exploratory action research via English Teacher Networks. RICELT ('Red de Investigatores Chilenos en ELT' - the Network of Chilean ELT Researchers) has also become increasingly committed to its support.

The role of mentors during the first year had been to provide advice on research procedures within a dialogic relationship, mainly via email-based communications. An even more humanistic kind of relationship between new teachers and mentors was achieved via skype and phone conversations during the second year, which itself began with workshops for English Teacher Network participants in five locations the length of Chile. These workshops were organised by the English Opens Doors Program of the Ministry of Education, which was by this point becoming more involved in the initiative. From Year 2 onwards, mentors who were experienced secondary school teachers and former Champion Teachers themselves were preferred to university-based teachers. This change was intended to bring about greater sustainability of the project and came also in response to participant feedback.

The Ministry of Education got involved from the beginning but not at their current level of involvement. The EAR project is now part of the CPD they offer to all English teachers, and school communities are becoming increasingly aware of this. There are two publications associated with the project, one to come out very soon: this is also making the initiative attractive.

Here is a 2014 interview with Paula Rebolledo who was at the time 'Senior Mentor' for the Champion Teachers project, about teachers' reactions during the first and second year.

In April 2016, to coincide with the launch of the fourth year of the project at a workshop in Santiago, we brought out the book Champion Teachers: Stories of Exploratory Action Research (Rebolledo, Smith and Bullock 2016):

The nine stories that illustrate the approach come from teacher-researchers who participated in the first cohort of the programme in 2013. Their narratives, given in third person and illustrated in innovative ways for a research publication (through photos, icons, drawings, and diagrams) give testimony to the effectiveness of the project. Its success can be judged twofold: firstly, by the evidence of teacher learning leading to ongoing development (presented through findings and teacher researchers’ further action plans), and secondly, through the testimonies of students and their learning.

The book was used to introduce university-based teacher educators to exploratory action research, at a seminar organised by the MInistry of Education and the British Council Chile on 22-23 April 2016. We have been investigating the impact on participants of having been involved in the Champion Teachers project and we are attempting to keep track of changes in initial and in-service teacher education in Chile as a result of the project.

[Update (July 2017)]: In 2017–18, principles and practices of exploratory action research are being: further disseminated via workshops with Paula Rebolledo, Claudia Bustos Moraga and Amol Padwad in Argentina, Turkey and India, respectively, as well as via the January-February 2017 and 2018 TESOL CALL-IS Electronic Village Online. See International Festival of Teacher-research in ELT.

[Update (January 2018)]: Teachers reported on their projects and interacted with Chilean Champion Teachers at an International Seminar on Exploratory Action Research in Santiago, 11-12 January 2018. Here is the first published report on the new Peruvian Champion Teachers scheme. Discussions among British Council and Ministry of Education officials in Chile, Peru, Colombia and Mexico led to an internal British Council application for funding to expand the Chamipon Teachers project (and associated Exploratory Action Research approach) to Colombia and Mexico, starting later in 2018].

[Update (January 2018)]: Publication of the book A Handbook for Exploratory Action Research by Richard Smith and Paula Rebolledo.

[Updates (April 2018): EAR was the approach adopted in the January–February 2018 TESOL CALL-IS Electronic Village Online on Classroom-based research for professional development. On 11 March 2018, participants in the AARMS project in India, which had followed an EAR approach, presented on their work at a 'mela' organized by the British Council at Ambedkar University, New Delhi. Teachers on the equivalent programme in Nepal presented on their work at the end of April, and the scheme will be expanded to seven mentors starting in May 2018. 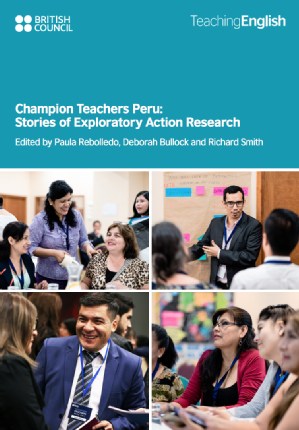 This book was followed in 2019 by Champion Teachers Mexico: Stories of Exploratory Action Research:...

... and another 2019 publication, arising from the ARMS programme in Nepal, Exploring for Action, Acting for Change: Stories of Exploratory Action Research in NepalLink opens in a new window, edited by Janak Singh Negi:

A further book arising from a separate initiative with teachers in Nepal has been Exploratory Action Research: Stories from Nepalese EFL Teachers, edited by Laxman Gnawali, Suman Laudari and Sagun Shrestha (2021, NELTA).

We are interested in further collaborations with Ministries of Education, regional British Council offices, teacher associations and universities to introduce secondary or primary teachers of English to Exploratory Action Research and to evaluate the impact.