New observations from the JWST show a molecular and chemical portrait of a distant planet, mapping its formation history.

WASP-39b is an exoplanet (a planet outside of our solar system), 700 light years away from Earth. Made of gas, extremely hot, and orbiting its host star (like the Earth orbits the Sun) in just four days, it has fascinated scientists since its discovery a decade ago, being similar to Saturn in mass and to Jupiter in size.

The research used spectroscopy (analysis of light split up into different wavelengths) to determine the exoplanet’s carbon-to-oxygen ratio, a significant finding which provide clues as to where it was formed and its subsequent migration over time.

JWST tracked the planet as it passed in front of its star, allowing some of the star’s light to filter through the planet’s atmosphere. Different types of chemicals in the atmosphere absorb light at unique wavelengths, allowing astronomers to work out which molecules are present. This method has successfully been applied before using ground-based and space telescope such as the Hubble Space Telescope. The advantage of JWST is its unique wavelength range, the infrared, where astronomers are now able to study a wide range of previously inaccessible molecules.

It is an ongoing research question among astronomers as to how giant planets could have come to be so close to their host stars. Leading study author, Eva-Maria Ahrer, a postgraduate student from the University of Warwick, said: “Various models have been suggested as to how these gas giants have formed and moved inwards towards its host star during their lifetimes. The composition of a planet can tell us more about this. In the case of WASP-39b, the spectroscopy revealed a low amount of carbon relative to oxygen in the atmosphere, suggesting that the exoplanet was formed further away from its host star, since migrating much closer, to a position nearer to its star – now even closer than Mercury is to the Sun.”

The research is part of wider efforts coming out of the Early Release Science (ERS) Programme from the Transiting Exoplanet Research Community. These reported the detection of potassium, sodium, carbon dioxide, water and carbon monoxide in the atmosphere of this distant planet. Scientists also report that expected signatures of both methane and hydrogen sulphide were absent from the data.

This ERS project was designed to provide the exoplanet research community with robust JWST data as soon as possible. The collaboration has recently demonstrated great success with an announcement of the first detection of carbon dioxide in the same exoplanet, published in Nature.

Professor Peter Wheatley, University of Warwick, co-author of this study, added: “Working with scientists around the world, in a study collaborating with NASA and using the JWST, has been a real privilege. It was also great to work with scientists closer to home too, such as James Kirk, who completed his PhD at Warwick.

“While WASP-39b is a giant planet with a huge atmosphere and located too close to its star to be habitable for life, this research demonstrates the power of spectroscopy in understanding the chemical composition of exoplanet atmospheres — hopefully one day we’ll be able to do this for other far away planets similar to Earth.”

This short-length video provides an overview of the ERS programme featuring an interview with Eva-Maria Ahrer: https://youtu.be/cI-kM_wPbbQ 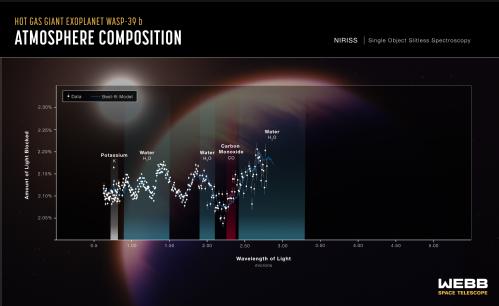 Known for beaming stunning images back to Earth, NASA’s JWST scored another first with this research: a molecular and chemical portrait of a distant world’s skies.

Early Release Science (ERS) Programme from the Transiting Exoplanet Research Community – provides scientists around the world with data from the JWST.