The Centre for Caribbean Studies was established in October 1984 with assistance from the Leverhulme Trust and the Nuffield Foundation. It was the first such Centre in the UK to recognise the significance of the Caribbean region and its historically interdependent linkages with the UK and the world. Its principal aim is to stimulate teaching and research on the Caribbean. It also encourages the study of the Caribbean in an Atlantic context, emphasising African, North and South American, Asian and European influences from a comparative, cross-cultural and interdisciplinary perspective. Additionally, it serves as a national forum for individuals and organisations with an interest in and concern for the diaspora as well as those countries bordering the Caribbean.

In 2010 on its 25th anniversary, the Centre was re-named the Yesu Persaud Link opens in a new windowCentre for Caribbean Studies in honour of the Guyanese philanthropist and businessman and in recognition of his long association with and support for the Centre, which has grown to become one of Europe’s leading institutions for Caribbean scholarship.

The current director of the Centre is Dr John Gilmore (English and Comparative Literary Studies).Link opens in a new window

In 2021 the annual Walter Rodney lecture, “The Responsibilities of Caribbean Intellectuals” was given by Professor Aaron Kamugisha from the University of the West Indies. A recording of the event can be seen here The Walter Rodney Lecture (warwick.ac.uk) Aaron Kamugisha is the Ruth Simmons Professor of Africana Studies at Smith College, the University of the West Indies. He is the editor of ten books and special issues of journals on Caribbean and Africana thought, and author of Beyond Coloniality: Citizenship and Freedom in the Caribbean Intellectual Tradition (Indiana University Press, 2019). 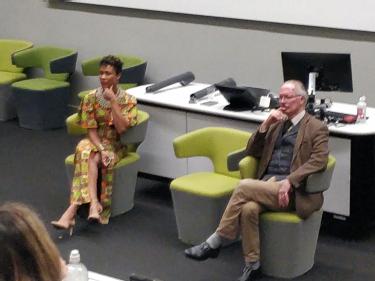 This year's annual Walter Rodney lecture was given by Professor Sasha Turner. Entitled Coming to Grips with Caribbean History: Sources and Production, it was the Centre's first in person event since the Pandemic and attracted a large audience who participated in a lively Q&A session following the presentation.

Sasha Turner is the author of the multi award winning Contested Bodies: Pregnancy, Childrearing and Slavery in Jamaica and is associate Professor of History at Johns Hopkins University.

A recording of this lecture will be available on the website soon.