The Yesu Persaud Centre at the University of Warwick is pleased to offer a Warwick Transatlantic Fellowship to a Caribbean-based post-doctoral fellow or established academic who wishes to spend a short period at Warwick University, working with a Warwick-based academic. Applicants should have made initial contact with a Warwick academic and indicate the research outcomes expected.

Fellowships will be worth US$2,000 (approx) and are open to all disciplines. Visiting Fellows will be provided with IT and Library access while at Warwick. Advice about accommodation will be available but on-campus housing cannot be guaranteed.

APPLICATIONS ARE NOW CLOSED for this year.

Renee A. Nelson is a lecturer in the Department of History and Archaeology at The University of the West Indies, Mona. Her research is concerned with the impact of West Indian migration on the UK in the post-World War II period - specifically, the contributions of West Indian migrants to the auxiliary services. She gave a talk on"British West Indian Attitudes Towards Migration, 1948-1962" 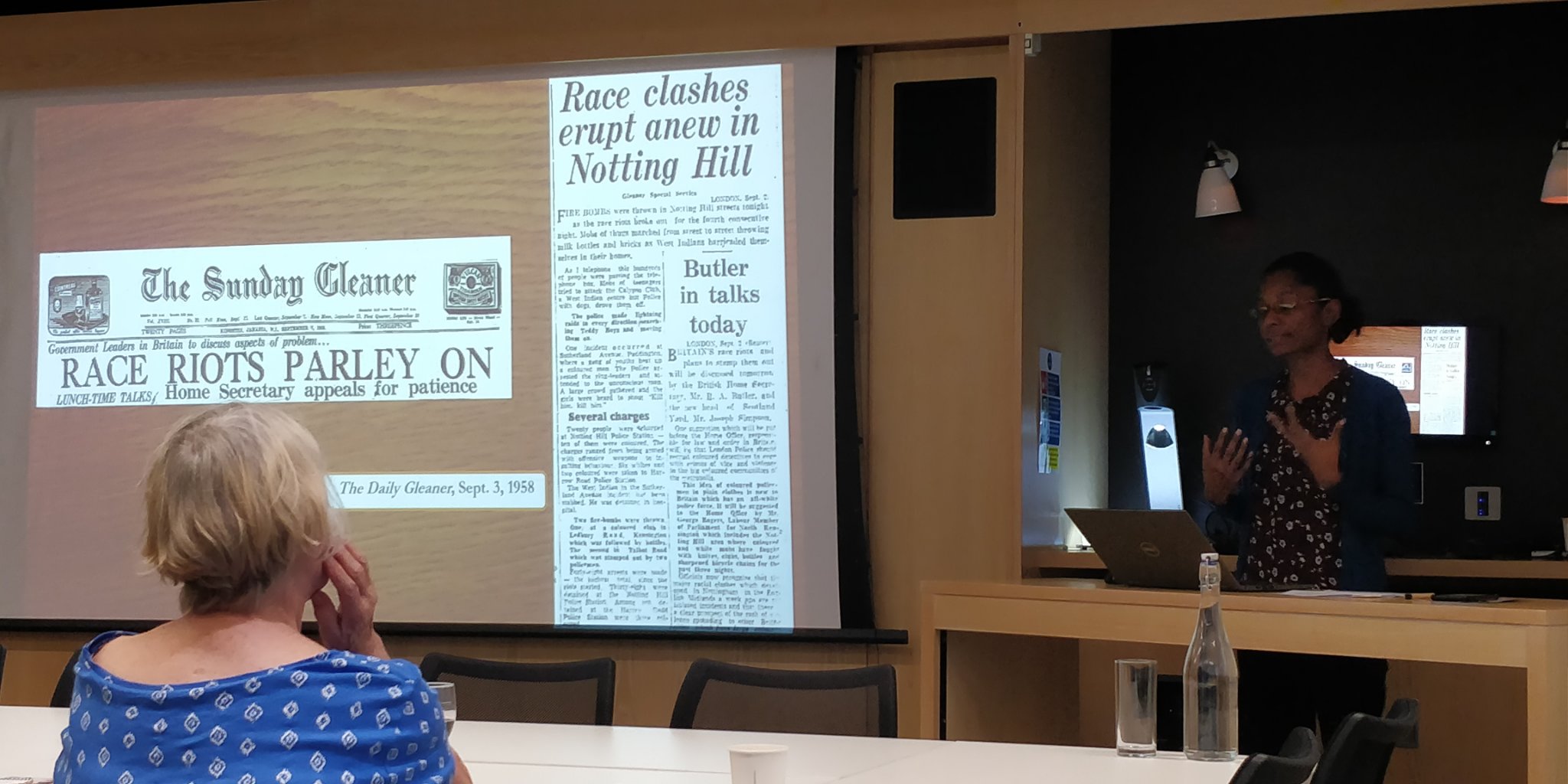 Two linked exhibitions on campus in the Summer term, 2019, organized by the Centre for the History of Medicine, celebrated the contributions of the Windrush generation and their descendants to the NHS and to British culture and society at large.

'Here to Stay' showed a series of portraits captured by local artist Ines Dalal, of Windrush/Windrush heritage NHS staff, accompanied by testimonies about their experiences. And in the Modern Records Centre at Warwick, a documents exhibition used archives from the Centre’s collections to look at the experiences and contributions of BAME people to British life across the 20th Century. It was a companion exhibition to Here to Stay, using documents from the 1920s to the 1990s which highlighted Britain’s health services, family and home, and the arts.

As a social researcher, Mala is interested in the livelihood strategies people develop and employ in order to cope with and adapt to difficult circumstances, including socio-economic issues as a consequence of poverty, crime, underemployment, unemployment and more recently, the devastating effects of natural disasters. These circumstances are sometimes further exacerbated because of the volatility of the global economic and political climate so it is important to also appreciate the ways in which macro factors influence the decisions that persons make in order to cope and adapt. It is within such a context that inter- and intra-regional migration developed; out of a determination for betterment and security.

This year’s Transatlantic Visiting Fellow was Dr Jessica Pierre-Louis from Université des Antilles. Dr Pierre-Louis’ research has mostly involved the exploration of samples of notarial acts and the serial study of 33.000 acts of parish registers. This research has allowed the reconstitution of genealogies which enable the examination of individuals and families over several generations, roughly over a period of a hundred years. With this research, Dr Pierre-Louis has shown how phenotype and whitening were prerequisites for “passing”, but she has also established that this was not enough: legitimacy, relations, privileged partners, choice of spouses and witnesses, wealth and the use of space were also very important. Some elements need to be further studied. That is why, in order to continue her research, she has joined the project Rezo which uses Fichoz, a collaborative data base which aims at analysing the relationship between different actors.

During her time at Warwick, Dr Pierre-Louis participated in a series of events around racial categorisation in the French Caribbean. In her first lecture, Dr Pierre-Louis discussed the informal process that free people of colour employed to cross the

colour line. Her work shed light on how identity was understood and could be negotiated in slave and colonial society.

Dr Pierre-Louis also took part in an event entitled ‘In Conversation: Race and Interracial Sex in the Caribbean”. In conversation with Camilla Cowling, also a historian of gender in Brazilan and Cuban slave societies, she provided an overview of interracial relationships and race in seventeenth to nineteenth century French Caribbean. The discussion revealed the similarities and the many differences in understanding race and interracial sex in the Caribbean region during the slavery and colonial period.

In her final formal event as Transatlantic Visiting Fellow, Dr Pierre-Louis shared her knowledge and experiences of researching the history of racial categorisations in the French archives with graduate students. She provided an overview of major French websites with online archives that could be used for research on topics related to race and family in the French Caribbean.

Dr Dominique Rogers from the Université des Antilles visited Warwick and attended several talks held by the Centre as well as presenting her own talk on ‘Free people of colour in the French Caribbean during the early modern period: old and new perspectives’

Dominique ROGERS is maître de Conférences at the Université des Antilles and head of the History Department, she is also a founding member of the Centre International de Recherches sur les traites et les Esclavages (CNRS). She was awarded the European prize des étoiles de l'Europe for the EURESCL project.

She is a specialist on free people of colour of the capital towns of French Saint-Domingue (Haïti). Her talk offered a wide picture on the state of knowledge on the freedmen of the French Antilles, particulary emphasising new perspectives offered by very recent PhD dissertations dealing with Martinique.

Dominique Rogers has recently published an anthology of material, highlighting the voices of enslaved men and women of the French Caribbean: Voix d’esclaves. Louisiane, Antilles et Guyanes françaises, XVIIIe-XIXe siècles, Collections sources et documents, Karthala, octobre 2015. She is completing with Boris Lesueur a book on the freedmen and descendants of freedmen in the Atlantic and mediterranean worlds, entitled Sortir de l’esclavage: stigmates, assimilations et recompositions identitaires du xve au xxe siècle (Méditerranée, Europe, Amérique, Afrique). She is also currently directing a multidiscilplinary programme on towns and urban societies of the Antilles and the Guyanas from the 16th up to the 21st century in partnership with the Institut National de Recherche en Archéologie Préventive ( INRAP).

Katherine Johnston, department of History, Columbia University, was the transatlantic visiting fellow in Summer 2015, She studies health and race in the eighteenth-century British Atlantic. Her interests include perceptions of “hot climates” (primarily the West Indies and the Georgia and Carolina Lowcountry) and bodily adaptation to those climates; migration; conceptions of race; and eighteenth-century health and medicine. She gave a paper at a one-day PG Caribbean Studies Conference at Warwick University.

Dr Matthew Bishop (Institute of International Relations, University of West Indies) visited the Centre in June 2014. His latest book is The Political Economy of Caribbean Development: A Comparative Analysis. He also has interests in Caribbean regionalism, small states and multilateral trade politics, and the global politics of democratisation. Matthew gave a workshop on 'Doing Research in the Caribbean' for postgraduates and gave a public seminar on 'Hegemonic Transitions in the Caribbean: China and the Post-Atlantic Future'. He will also gave a research seminar on 'Political Economy and Caribbean Thought'.

Dr Malik Ferdinand (Université Antilles-Guyane) visited the Centre from 22 April to 4 May 2013. His research is concerned with the unity and diversity of Caribbean literatures in English, French, Spanish and Creole. He gave a seminar, 'Greek masks, Caribbean seascapes in Aimé Césaire's, Derek Walcott's and Reinaldo Arenas's poetics'. He also led a class, hosted by Pierre Phillippe Fraiture and Fabienne Viala, on Creolité and the practice of French Creole in France and in the French Caribbean, which took place on 1 May.