Bringing together literary criticism, global book history, biographical writing and cultural studies, this collaborative research programme investigates the interconnected history of broadcast culture across three continents in the post-war era. Focusing on the loosely articulated networks of literary and cultural production in the Anglophone Caribbean, the work of the Gold Coast Broadcasting System in Accra, and the mediating role played by the BBC Colonial Service, we are interested in examining the involvement of these networks and institutions in shaping the stylistic and political contours of emerging world literatures in the twentieth century. Broadly speaking we aim to map out a cultural topography of the uneven production, circulation, and reception of cultural forms within the world-system at the time of decolonization (1945-1968).

Over the last decade or so there has been a significant resurgence of interest in the idea of world literature, a development arising in part from a sense that ‘globalization’ has thrown the received disciplinary protocols of literary studies into question. Franco Moretti, for instance, has posited the idea of a world literary system in which texts, forms, and genres circulate and compete for primacy across the uneven and unequal landscape of the global literary marketplace (“Conjectures on World Literature”, 2000). Our work seeks to contribute to improving the understanding of the complex dialogues between cultural producers, audiences, and literary and broadcasting institutions in decolonizing regions within the world-system. In this way we hope to complement recent theoretical interventions and conceptualisations of world literature through empirical investigation into the historical dynamics and material pressures shaping the production, circulation, and reception of literary work.

The Yesu Persaud Centre for Caribbean Studies has been given privileged access by the Swanzy family to the memoirs and personal letters of BBC producer Henry Swanzy. By examining Swanzy’s writings and collections, we want to set the ground for a more comprehensive and accurate assessment of the development of post-war Caribbean, West African, and Black British literatures. Henry Swanzy himself is indicative of the connections that existed between these literary and broadcast histories, having produced the radio programme Caribbean Voices (1946-54), before becoming Head of Programmes for Radio Ghana (1954-58). Analysing the creative output, dialogues, and tensions arising from series such as West African Voices and Caribbean Voices, will, we hope, provide a new perspective on the dynamics of the literary marketplace and help to rethink the global linkages between diverse literary and media productions. 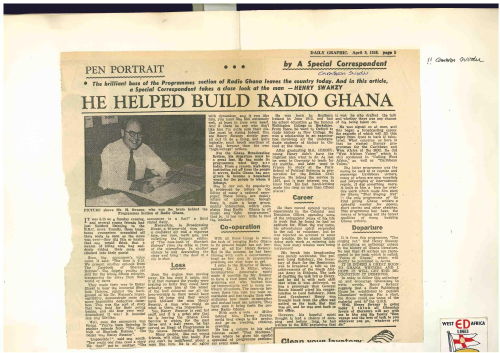 The Swanzy papers include much significant material hitherto unseen, including correspondence with Caribbean writers such as Wilson Harris and Kamau Brathwaite, the Nobel Prize-winners Derek Walcott and V. S. Naipaul. They also detail his dealings with his predecessor on Caribbean Voices, the Jamaican poet and broadcaster Una Marson, and with literary agents and editors in the region, including Frank Collymore, A. J. Seymour, and Gladys and Cedric Lindo. This unique archival resource will shed light on the pioneering role of Caribbean Voices in shaping the dynamics of canon formation in the Caribbean. The programme was central in promoting the early careers of prominent Caribbean writers like Walcott and Naipaul; but analysis of Swanzy’s papers also highlights the huge range of authors working in the Caribbean in the lead up to independence who have subsequently been marginalized in the field. The papers reveal, too, the implicit and explicit pressures Caribbean Voices brought to bear on its contributors – the correspondence with the Lindos, for example, provides concrete evidence for the ways in which the BBC operated as intermediary, looking to exercise influence on the form and content of submitted works in line with its (colonially-inflected) perceptions of ‘literary’ quality and audience expectations. But the history of this programme also attests to the complex dialogue and multi-directional exchanges between cultural producers in the periphery and the institutional mechanisms through which they published and promoted their work.

Our research will make use of archival material in Ghana to provide new insights into the processes of literary and cultural production in the run-up to independence in 1957, focusing in particular on the role of the BBC radio programme West African Voices and the compilation Voices of Ghana. The latter, the first anthology of Ghanaian literature, published a year after independence, provides a record of literary contributions in English made to the new nation’s radio station. Analysing these cultural outputs enables consideration of the ideologies of regionalism, the development of a literary voice for the new citizens of Ghana, and the complexities of the metropole/periphery relationship towards the end of colonial rule.

In confirmation of the way Swanzy’s career functions as a microcosm of the circuits of cultural production and transmission, he was involved as producer of West African Voices and edited Voices of Ghana, he was also editor of the Royal African Society’s journal African Affairs. Swanzy had long sought employment in West Africa, where part of his family had trading links stretching back to the C18th. As stated in the final RAS journal, “African Affairs are, with Mr. Swanzy, an inherited interest. His family has honourable associations with the West Coast, and at one time he contemplated a career in the Colonial Services in the hope that it would lead him to Africa… and now he has the opportunity he so long sought of whole-time service among the people of the West Coast.” (vol. 54, no. 214, January 1955)

Our research will be framed by an attention to the social, political, and economic upheavals of the post-war era. The period 1945 to 1968 was characterised by a global economic boom, with gains made not only in the core countries, but also in the communist east and the global South (Samir Amin, Capitalism in the Age of Globalization, 1997). The material we will be examining is shaped by and reflects on this global conjucture, registering the tensions arising from the unfolding of the Cold War, the end of empire, and the era of mass migration to the UK.

The questions our research seeks to answer include:
• How might we map the connections and divergences between specific histories of cultural production and broadcasting in the Caribbean, Ghana, and UK in the era of decolonization?
• How did those tri-continental broadcasting institutions and programmes influence the formation of literary canons and of national and transnational literary publics; and how did they contribute to the shaping of representations of national identity?
• How did the BBC act as a conduit for the circulation of literary and cultural forms, as well as for discussions over political independence in Ghana and the Caribbean?
• How does Henry Swanzy’s broadcasting career function as a microcosm for the circulation and institutional mediation of cultural forms within the world literary system?
• How was the BBC, and in particular Caribbean Voices, enmeshed in the political discussions over race and immigration in the Windrush era?

As part of our "Decolonizing Voices" research programme, we had the pleasure of speaking to the author Patrick French about V.S. Naipaul (the subject of French's 2008 award-winning biography The World Is What It Is), Caribbean Voices, Henry Swanzy, and twentieth-century Caribbean literature. Click on the link below to hear the interview in full. 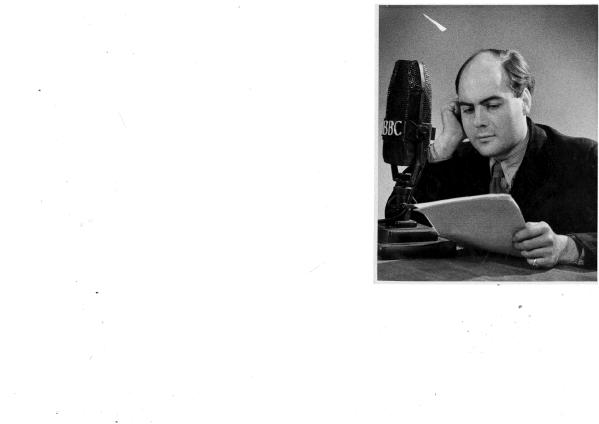