The project was featured today on BBC Midlands Today!!!

If you missed it, the clip can be viewed on their facebook page: Click here to view the video

In this video one of my friends with no RC experience is in full control of the Hexakopter UAV with only about 10 minutes training.
Even though he is controlling it, the Hexakopter is flying itself maintaining any height and position commands given to it. Making it very easy to fly.

Not only can it hover... it moves!

The UAV is no longer stuck in the hover!
The video below shows the hexakopter taking-off moving 1 metre forwards and then moving back to the starting point and landing. The two yellow markers are 1m apart.

I will hopefully be able to get a video of it flying a square pattern and not just forwards and backwards shortly.

This is a video I made last week demonstrating the current mapping capabilities of the hexacopter.

Yesterday the helicopter had its first fully autonomous flight!
At the moment it will (without me touching the controls) take off, climb to a set height and then hover on the spot before landing safely.
The only input required from me is to switch the motors on, a command I am a little hesitant to give the robot at the moment...

I took a video of it this afternoon for you all to see:

Will upload a few more videos when I have figured out how to make it move around!

I will be updating the website shortly to reflect the progress that has been made in the last few months.

In short, the helicopter can now automatically maintain a set height above the ground using the onboard ultrasound sensor. A video showing one of the early tests can be viewed here

Currently, I am investigating how to use the  onboard laser scanner to enable the robot to accuratly maintain the helicopters position as well. More information about this will be available soon.

It's all coming together...

The mounting brackets that were designed last week have now been manufactured.

The bracket that holds the LiDAR to the top of the helicopter is pictured below, it was laser cut out of 0.7mm stainless steel. The second bracket bolts on to the underneath of the helicopter and holds the battery, computer and power distribution board. Also made of 0.7mm stainless Here is a photo of the computer stack without wiring. The brown board closest to the camera still has a few components that needs attaching. These components will allow the computer to control the heli. Both the LiDAR and the computer stack attached on the helicopter, still no wires (that is a job for next week). You can see all the photos here: http://www2.warwick.ac.uk/fac/sci/eng/meng/wmr/projects/uav/photos/mountingthesensors/

Yesterday, some quick payload tests were carried out to see whether the helicopter could comfortably lift the planned sensor array (estimated to weigh around 700g).

Unfortunately the only thing we had in the office that we could easy to strap to the helicopter and weighed around a kilo was a carton of juice... Very scientific.

The helicopter remained very controllable, stable and only needed about 60% throttle in the hover (so has some spare power left). 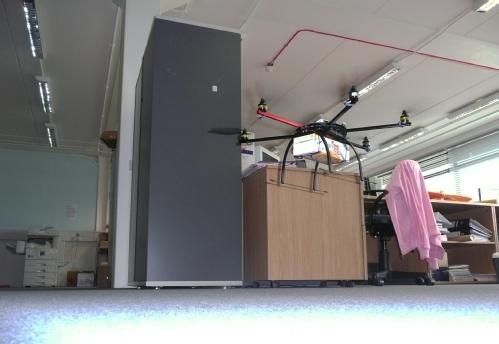 It came as a kit with "some assembly" required and just over two days of work later it was assembled and ready to fly!
Some pictures of the build can be seen here. 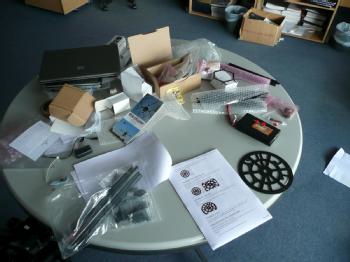 The MikroKopter flies very well, the vibration is surprisingly low, it is very fast and agile (although something that I don't really want in this project) and is very very stable platform. Much better than I expected. 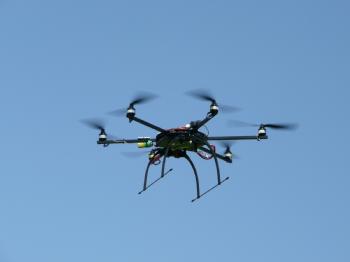 I am now investigating how to mount the sensors and onboard computer so I can start to collect data and try to automate it.