T2K Back In Business

After a fantastic effort by the beam group at J-PARC the T2K accelerator is back in action after the devestating earthquake of March 2011 and this month the experiment will be returning to full physics operation.

The Linear accelerator was running on 6th December, before the year was out, and protons were making it all the way down to the T2K target by the end of January - as evidenced by the attached display showing the near detector's first neutrino interaction! Although not suitable for our physics analyses, January running even produced a neutrino interaction in the far detector, Super Kamiokande (see the news item on t2k-experiment.org).

It's widly expected in the neutrino community that this will be the year when the important parameter θ13 - which governs how often neutrinos change types - will be measured by some of the many experiments seeking it. So exciting times ahead!

Neutrinos Breaking All The Rules!

Recent results from another neutrino experiment have brought neutrinos into the spotlight once again reminding us once again that neutrino physics is one of the most exciting areas of research in physic today!

The results come from the OPERA experiment, which uses a beam of neutrinos fired from CERN in Switzerland 700km to a laboratory in Italy known as Gran Sasso. Like T2K the experiment was built to measure neutrino oscillations (see our public overview to learn more).

But this time it isn't the oscillations which are catching the headlines. By combining sophisticated timing equipment and high-precision distance measurements the experiment has been able to measure the speed with which the neutrinos make the 700km journey through the Earth to Italy.

The result shocked the world because the measurmed the neutrinos as travelling faster than the speed of light! According to Albert Einsteins famous theory of relativity, this is something that no particle should be able to do. The speed of light is a sort of "Universal speed limit" which nothing should exceed.

The result revealed only a small increase over the speed of light - the neutrinos arrived only 60 billionths of a second early - and making a measurment that precise is incredibly difficult. None the less if it were proved to be correct the foundations of modern physics wouuld need to be re-thought.

The world will be watching over the coming year to see if any one can explain the result, and other experiments such as T2K will consider upgrades to their equipment so that they too can cross-check the OPERA result. But regardless of the outcome this surprising result has once again highlighted the exciting physics being done by neutrino experiments accross the world!

The T2K experiment now has it's very own public website!

The site is filled with useful information aimed at a general audience about the experiment and the history and physics of neutrinos, the mysterious particles which we study.

Additionally there are many useful resources for other physicists interested in neutrinos who might want to know more about our latest results.

The site went live on Monday 24th October so head over and take a look: http://t2k-experiment.org.

The T2K experiment today released their first ever physics result which has also given us our first evidence of a previously unseen phenomenon.

The experiment studies the Universe's most mysterious particles, known as "neutrinos", which exhibit a behaviour known as "neutrino oscillations". There are three distinct types of neutrino (electron, muon and tau) but as they travel they can change back and forth from one to the other. So just because you had a muon neutrino to begin with, you might not have a muon neutrino later!

In T2K, an accelerator on Japan's East coast produces a beam of muon neutrinos, then fires them almost 300km through Japan to a detector at Kamioka. What the experiment has observed, for the first time, is a hint that some of those muon neutrinos are oscillating into electron neutrinos. With many experiments around the world racing to be the first to observe this effect, T2K's publication of this hint will be a significant result in the particle physics community.

Measuring such oscillations is a crucial step in our attempts to explain why the Universe is now made almost entirely of matter and not equal amounts of matter and anti-matter, as it was at the big bang: the biggest open question in particle physics.

If it were not for the devastating earthquake earlier this year, T2K would have most likely been able to confirm this result, instead of seeing just a hint, so all eyes will be watching for what happens when the experiment restarts in the near future!

If you'd like someone to comment on this significant result, Warwick's Dr Gary Barker and Dr Steve Boyd have been working on T2K for over 6 years.

T2K's first paper as a collaboration is now available!

The 'first paper' is a significant milestone in a collaboration's history, marking a definite departure from construction and preparation into producing physics results.

The paper, which describes the experiment's construction and operation, will be published in the journal Nuclear Instruments and Methods next month. Until then you view it on the arXiV at the following address: http://arxiv.org/abs/1106.1238

Warwick has 9 authors listed on the paper including our technicians who were instrumental in our construction of the P0D ECal detectors.

As most will be aware, the east coast of Japan was recently struck by the most powerful earthquake ever recorded in Japan, resulting in a devestating tsunami and great loss of life.

An additional (though relatively minor) consequence of the disaster has been the closing of J-PARC, the complex at which T2K's accelerator and Near-Detector are based. The earthquake was still above magnitude 6 when it struck the facility, though fortunately none of our colleagues on-site were injured. As a result, the T2K experiment has been halted until the facility can be recovered to operational condition.

The T2K group at Warwick send our deepest condolances to those affected by this terrible tragedy, and wish the Japanese people all the best in their recovery efforts.

During running last week the T2K experiment reached a notable milestone in its quest to study the elusive neutrino.

The T2K neutrino beam is made by colliding high-energy protons with a carbon target, and last week we reached 1020 (that's 100 billion billion) protons-on-target!

T2K's precision will ultimately be limited by the number of neutrinos it produces, so the experiment is continuing to push hard until the summer shutdown. Meanwhile the first papers from last year's data are in the final stages of approval.

This data run is also the first to include the P0D ECal detectors built here at the University of Warwick. Here's one contributing to the tracking of a cosmic-ray muon: 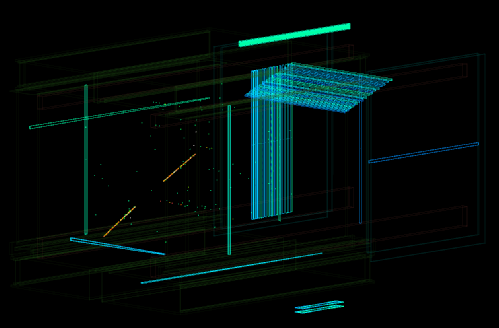 If you're planning on visiting the Manchester Science Festival this year you're in for a treat!

T2K representatives from around the UK, including Warwick, will be on hand at a special exhibition: "Super K Sonic Booooum".

The exhibit takes visitors through the Super-Kamiokande detector, accompanied by T2K particle physics experts: "On the journey they learn of neutrinos, their role in the Universe and how scientists detect them. This installation is designed to deliver physically thrilling experiences; emerging the audience on a journey through the physics of the Universe"

Visit the Super K Sonic Booooum or Manchester Science Festival websites for more information, or read more about Super-K on our overview page.

Warwick T2K on the BBC

After covering the construction of six detector modules here at Warwick, BBC reporter David Gregory has been following up the T2K experiment's progress. Dr Gary Barker hosted him in Japan at J-Parc: home of T2K's accelerator and near-detector, where the Warwick modules are being installed. Those watching BBC News this week will have seen his reports and interviews with Dr Barker.

Communicating the work that T2K is doing is an important part of our work: bringing the benefits of research to the whole of society, and national news coverage is one of the best ways we can do that!

Check out the article on the BBC news website, and read about David Gregory's impressions of science in Japan and funding in the UK on his blog.

If you missed the original report you can watch it on our resources page.

Students at this year's SLAC Summer Institute were treated to a talk on the T2K experiment by Warwick's Dr Phill Litchfield. The talk covered all the requirements that T2K must meet and how they come together to make a world leading measurement of neutrino oscillations!

The SLAC Summer Institute is an annual summer school held at the Stanford National Accelerator Laboratory in California, USA. Students attend a mixture of lectures, tours, discussions and seminars.

To see the talk, you can download the slides from our T2K Resources page.