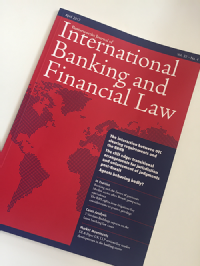 In recent times, there has been a raft of new legislative initiatives aimed at reducing systemic risk in financial markets.

In their article published in the Journal of International Banking and Financial Law (JIBFL), a leading periodical for practitioners, Dr Stephen Connelly and PhD student Saveethika Leesurakarn from University of Warwick’s School of Law looked at how these initiatives interacted and asked whether there could be problems.

The article is available through LexisNexis, featuring highly in the edition immediately following acclaimed contributors to the field, and headlining the print edition.

Their piece, titled ‘Tis said they ate each other? The interaction between OTC clearing requirements and the BRRD’, focussed on the use of central counterparties (CCP’s) in derivatives markets, and whether these safety mechanisms conflicted with protections for market participants.

“One method was to bail-in these investors, such as swap counterparties, which meant that if a bank in trouble owed them money (net), that liability would be cancelled and the investors would write the debt off.

“Another mechanism, aimed at the prevention of crises in the first place, was to make swaps more transparent by having them concluded in central trading systems, using an independent Central Counterparty (CCP) as a kind of circuit breaker.”

In earlier published research, Dr Connelly showed significant problems in the way in which bail-in of swaps was implemented in the UK, providing valuable insights on which the Treasury Committee were able to draw on to rectify this complicated area of law. 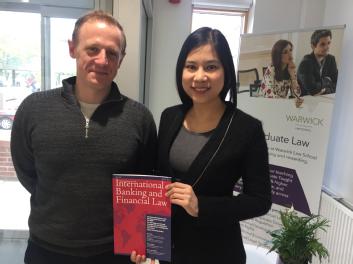 Through this new article, working with Saveethika, Dr Connelly specifically worked through examples of the bail-in system in action where a CCP is also involved.

They highlighted gaps and contradictions in the drafting of the relevant regulations (problems exacerbated by the UK’s implementation and case law) for the benefit of regulators and practitioners, enabling them to better prepare for, or even remedy, such problematic consequences.

Saveethika, on the relationship of this article to the focus of her current PhD, said: “My thesis is in the same area of banking and financial law as this article, exploring approaches to resolution and financial stability for preventing financial crises and dealing with banks deemed too big to fail.

“Being published has really helped broaden my horizons and even develop ideas for my own work. For example, investigating the transactional practicalities of how OTC derivatives operate for this piece allowed me to include examples of real incidents from financial crises in my own work."

This is the first time 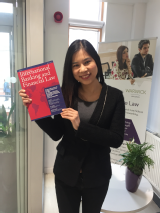 Saveethika has been published in a globally recognised journal.

On achieving publication, Saveethika (known as ‘View’) said: “I am very grateful to be co-published in this prestigious journal because my aim is not only to get a postgraduate degree, but also to contribute knowledge to the field.

“I feel very thankful to be a part of a PhD family at Warwick and to my supervisor especially.

“Stephen devoted his time not only to supervise me on my thesis but also to teach me on how to get published.

“I got useful advice on how to draft an article and I was able to learn from him about thinking systematically, constructing arguments and improving my writing.”

“View's experience in finance law and her solid legal grounding meant that I felt confident I could throw such a technical piece her way,” added Dr Connelly.

“Writing together was a great addition my supervisory role because I could show her my own thought processes, mistakes, rhetorical arrangements, as well as instil high-standards with this work since it would have both our names on.

“Perhaps the best aspect though, was that we were simply able to sit together and abstractly think through the various permutations of events that could occur in this complex area.

“It's great that View will be read by key people in the field. I look forward to seeing more of her work being published,” concluded Dr Connelly.

The opportunity and the experience has motivated Saveethika to pursue the field further with a view to producing useful, pragmatic outputs.

“In the future, I plan to make further contributions to the field of banking and financial law. In addition to my thesis, I am willing to teach, write more articles that are beneficial to legal practitioners, and hopefully even publish my own books."

The article is available through LexisNexis:

Dr Stephen Connelly & Saveethika Leesurakarn, 'Tis said they ate each other? The interaction between OTC clearing requirements and the BRRD - (2017) 4 JIBFL 205.