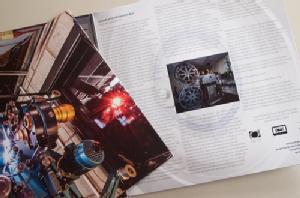 Dr. Michael Pigott has released an album of field recordings of 35mm cinema projection boxes entitled Sounds of the Projection Box. The album is available on vinyl and digital from the german Gruenrekorder label, and soon from UK outlets such as Juno Records.

The album comes out of The Projection Project, a research project based in the Film and Television Studies Department at the University of Warwick, which seeks to record and investigate the history of cinema projection in Britain. A special issue of the Journal of British Cinema And Television Studies (Vol 15, No 1, 2018), edited by members of The Projection Project, features a number of articles about the history of British cinema projection and the work of the projectionist in Britain, through the twentieth and twenty-first centuries. It includes an article entitled 'Sounds of the Projection Box: Liner Notes for a Phonographic Method‘, which augments this album, and elaborates upon the theoretical and methodological rationale for the use of sonic field recording as a mode of enquiry.

All of the images that accompany this record were made by Richard Nicholson. Some of them form part of a series of portraits entitled The Projectionists.

Here is one of the first reviews of the album from A Closer Listen.

On October 20th Michael will talk about the album and field recording as a mode of investigation at Vivid Projects, Birmingham. Tickets for the talk can be booked HERE. Later that evening there will be a live audio-visual performance using some of these techniques and the projectors and projections that make up Michael's installation Digital Light Processing, which is part of the ongoing exhibition Mediafest at Vivid. Details of this event are HERE.