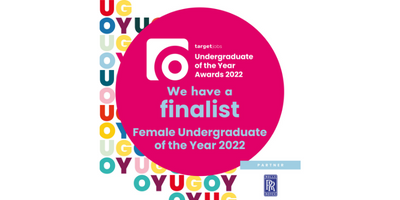 Jessica Man beat off stiff competition to be named as a finalist for Female Undergraduate of the Year 2022.

The targetjobs Undergraduate of the Year Awards is a competition open to students across the UK where they can win prizes such as placements, internships and trips abroad with internationally recognised organisations. This year there were 12 different awards that cover a range of academic subjects and skillsets and almost 4,000 students applied.

All entrants had to first complete an application, including essay style questions and bespoke online tests devised by SHL. Once passing that stage students were either invited to a telephone interview or take part in an assessment centre. Everyone at totaljobs has been extremely impressed with Jessica Man who is now invited to the grand final taking place on Friday 29 April where each award winner will be announced.

It goes without saying that reaching the final is a huge achievement for the 120 student finalists, and Warwick Chemistry is so proud of Jessica. Huge congratulation for making it this far and good luck at the finals!

The winners will be announced on social media live on the day so feel free to follow to find out the winner!