Welcome to the News and Events page for the Department of Statistics.

Launching this week for the summer of 2020; an exciting new 8 week long research internship program, run by the Department of Statistics. Projects across the fields of Statistics, Probability and AI aimed at giving successful applicants an ideal introduction to a career in research.

Candidates will be guided by an academic supervisor and they will also have the opportunity to participate in weekly cohort events. More information, including details of how to apply, can be found at http://warwick.ac.uk/stats-interns. DEADLINE for applications is 28 February, 2020. 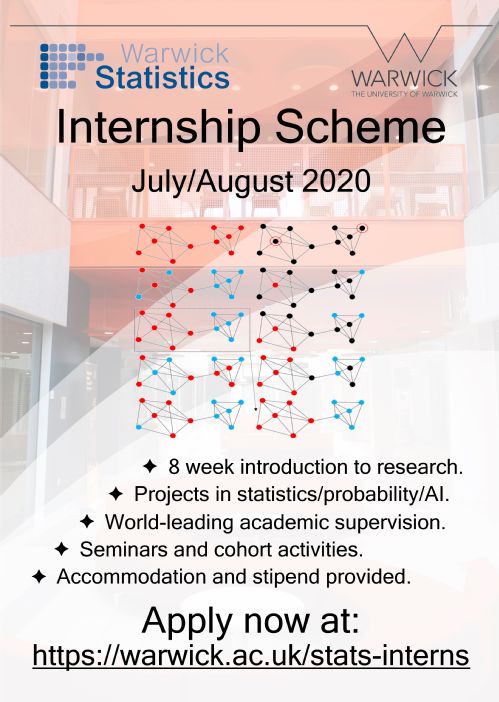 Another election, another exit poll!

At the UK general election on 12 December the exit poll, which is commissioned jointly by broadcasters BBC, ITV and Sky, will again use the methods that were introduced in 2001 by Professor David Firth (in joint work with Professor John Curtice of the University of Strathclyde).

The new methods have led to renewed trust in exit polls, which since 2001 have been remarkably accurate in predicting House of Commons seat totals — a prediction made at 10pm on election day, immediately after polling stations close their doors.

It's great to see the approach that I suggested and developed in 2001–2005 being used still in 2019. Its success is due mainly to purposeful statistical thinking in both the design and the analysis of the exit poll; and partly of course also to luck! But it could not succeed without, in addition, the work of a brilliant team of academics on the election day itself.

The election-day team analysing the 2019 exit poll will again be led by Sir John Curtice. The team's statistical expert has since 2010 been Professor Jouni Kuha (LSE) — a good friend of David Firth's since the 1990s. David says of this: "Perhaps the most remarkable thing, for me personally, is that Jouni can still manage to run the same R code that I threw together in haste before the 2005 election!"

For more information on the exit-poll method and its track record, see the Exit Poll Explainer page at warwick.ac.uk/exitpolling.

There will be a PhD Open Day on Wednesday 4 December, 2019 at the Department of Statistics, University of Warwick.

Follow the link below for further information:
Open Day

MSc in Mathematical Finance for 2020 entry

MSc in Mathematical Finance launched to reflect the new financial instruments & markets, technological innovation and the changes in the regulatory framework, with a new focus on algorithmic computational methods, including machine learning, and financial mathematics.