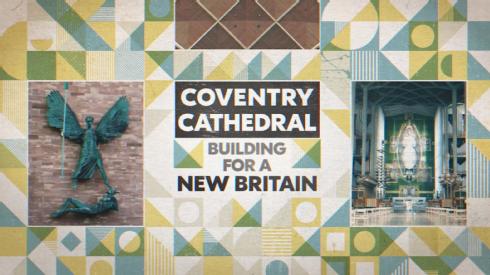 Coventry Cathedral is recognised today as one of Britain‘s greatest post-war buildings and a key element of the post-war reconstruction of Coventry.

Using a wealth of rarely-seen archive film, together with voices from yesterday and today, the new documentary Coventry Cathedral: Building for a New Britain (BBC Four, Wednesday 9th June 21.00) will tell the unique story of the rebuilding of the cathedral following its destruction in 1940.

Narrated by Pauline Black, lead singer of the iconic Coventry band the Selecter, and presented as part of the BBC’s programming around the Coventry UK City of Culture 2021, Coventry Cathedral: Building for a New Britain was informed by research for Ghost Town: Civic Television and the Haunting of Coventry, a project led by Professor Helen Wheatley of the University of Warwick, who has acted as a consultant on the new documentary.

Commenting on how she became in involved with the project Professor Wheatley, Director of the Centre for Television Histories at the university, said:

“It has been a great privilege for us at the Centre for Television Histories to work with producer-director John Wyver on Coventry Cathedral: Building for a New Britain.

“This collaboration grew out of our project Ghost Town: Civic Television and the Haunting of Coventry which sees us working with media archivists to bring programmes made in and about Coventry back to the city.”

It was thanks to screenings of programmes in the cathedral as part of Ghost Town that previously unseen material on the rebuilding of the cathedral came to light. Professor Wheatley comments:

“I’m particularly delighted that the wonderful colour cinematography of Barnard Reyner, a local architect and filmmaker who was commissioned to document the construction work, was brought to our attention thanks to one of the Ghost Town screenings.

“The footage, which had been sitting in an attic until a family member who attended one of our events in December 2018 brought it to our attention, has been used to wonderful effect in John Wyver’s film to bring the story of the Cathedral’s building to life.”

“It has been a real pleasure to be part of this process and to see how new programming can be constructed from archival sources; John has been patient and generous in sharing his process with us. I can’t wait for the people of the city to see the finished result.”

Many of the Ghost Town events focused on historical broadcasts about the cathedral itself. Working with the Media Archive of Central England (MACE), the BBC, Studio Canal and others, the project brought this programming back to the city.

When Professor Wheatley started to talking to John Wyver about his long standing interest in making an archive-based documentary about Coventry Cathedral, the work undertaken for Ghost Town led to the collaboration and her role as a consultant. As the project developed, the University of Warwick also supported a Collaborative Doctoral Award for Kat Pearson, who has worked as a researcher on the film.

Research by Emeritus Professor Louise Campbell of the History of Art department, whose books Coventry Cathedral: art and architecture in postwar Britain (Oxford, 1996) and Basil Spence: Buildings and projects (RIBA, 2012), provided John Wyver with essential historical background, is one of those being interviewed. Commenting on the programme Professor Campbell said:

“I hope that the programme will convey the enormous significance of the cathedral as the premier project of Britain's postwar reconstruction, and Spence's extraordinary skill in designing a building which supplied a reassuring link between past and present.”

In November 1940, German bombers destroyed much of the city centre of Coventry and reduced the city’s medieval cathedral to rubble. Immediately after the air raid, Reverend Richard Howard, Provost of Coventry Cathedral, made a commitment to rebuild the cathedral. In 1951 the architect Basil Spence won the competition to design the new cathedral, built in a bold, modern style, incorporating the ruins of the old cathedral and adorned with a wealth of modern artworks. Despite the opposition of the local council, shortage of funds, and major architectural challenges, the new building was consecrated in the presence of Queen Elizabeth just a decade later in May 1962.

The cathedral contains works of art commissioned from some of the major artists of the 1950s. Graham Sutherland designed the vast tapestry of ‘Christ in Glory’, John Piper and Patrick Reyntiens created a glorious multi-coloured window for the Baptistery, and John Hutton carved angels and saints into a huge glass screen for the main entrance.