There is no precise date to the temple but the best guess comes to the first quarter of the 5th Century BC due to deposits of marble (offfcuts from the construction of the temple) found inside the temple. It's a doric style temple made entirely of marble with three main chambers, colonaded on ecah side.

There is no substantal evidence indicating that there was an earlier structure on the site, at leaast not a substantial one as no foundations have been found. There is however, a substantial amount of pottery below the current foundatins with fire damage, alluding to the destruction of a smaller, non-perminant sanctuary around 480BC. [1]

The building is styled in the Doric order with a few Ionic variations in teh decoration. It had a garden attached to it in the 3rd Century BC according to Pausanias which was a wonder in itself, lined with large clay flowerpots and rows of shrubbery and plants. It is the first of its kind.

The building and surounding area was converted into a church and graveyard in the mediaeval period. In total 66 graves covered the site [2] both inside and out, and the gravediggers clearly didn't pay much regard to the preservation of the ancient building below. The building itself remains in relatively good repair owing to its use as churches through the 7th-14th Cenuries AD.

There was some controversy with who to attribute the sanctuary to, with many believing it to be a sanctuary of Theseus given the metopes on the North and South facade which depict his labours. The location in the metal working disctrict of Athens, the forges found around it and the remains of the cult statues however attribute it to Hephaistos, god of fire and the forge, [3] and Athena Ergane, patron of artians.

The two gods are linked through their associations with the artisans of Athens and their mythological relation. Hephaistos is thought to have made much of Athena's weapons but more interestingly he was thought to have ejaculated on the leg of Athena and from this the first Athenian man was born. The two are therefore instrinsically linked in this sanctuary.

Dedications-
This temple was dedicated to the god Hephaistos and goddess Athena. Two statue bases found re-used in the east wall are thought to have held the two dedicatory statues of Athena and Hephaistos crafted by Alkamenes in 421-415BC. Though nothing remains of them today, the reciepts for the order of bronze remain and places the statues at around 2 1/2 times life size. [4] Though we can't really say what they looked like, Pausanius (1:14:6) describes Athena's azure eyes while Valarius Maximus (8:11) describes the attempt to conceal Hephaistos' lameness under his cloak whilst still allowing it to be apparent.The preservation of other dedications is hindered by the sanctuaries appropriation by the Christians. Not much of the 'pagan' remains survive with many of the statues being actively chisled and disfigured by the early Christians. There are a large number of fragmentary pottery remains however which seem to go beyond the regular day to day pots.

Festivals-
The only known festival was in honour of Hephaistos, kown from an inscription of 422BC [5] the Hephaisteia. It occurred sometime in the spring and included a torch race (he was the god of fire after all) and a procession, culminating at the temple with the sacrifice of goats. [6]

There are no specfic rules or regulations that I could find, the cult of Hepahaistos was not a wide reaching one and so not a lot survives. This is also due to the many conversions the sanctuary underwent which destroyed much of the epigraphical evidence.

The sanctuary was built during the building of the Parthanon and so presumably more attention and funding was directed there as the temple was not completed for around 30 years. This means that it overlaps two very distinct era's of archeological styles, hence the lack of uniformity in its construction. It was built after the Athenians decided to officially recognise the cult of Hephaistos.

The only other cult of Hephaistos known in the Greek world is on the island of Lemnos where Hephaistos was thought to have landed after his fall from Olympus. Presumably then, given the locality of the god and goddess of the temple, the Hephaisteon was solely used by Athenians or visitors from Lemnos. The sanctuary was after all placed in the artisan arena of Athens, to which both gods had connections. This is not explicitly stated however.

W.B. Dinsmoor, "Observations on the Hephaisteion" 1941 The American School of Classical Studies

E. B. Harrison "Alkamenes' Sculptures for the Hephaisteion Part 1, the Cult Statues" 1977 Archeological Institute of America

W. E. Thomson "Inscriptions of the Hephaesteon" 1969 The American School of Classical Studies in Athens

"The Ancient Agora of Athens" 2006 Foundation of the Hellenic World:

The temple is located on a hillside overlooking the Athenian Agora. 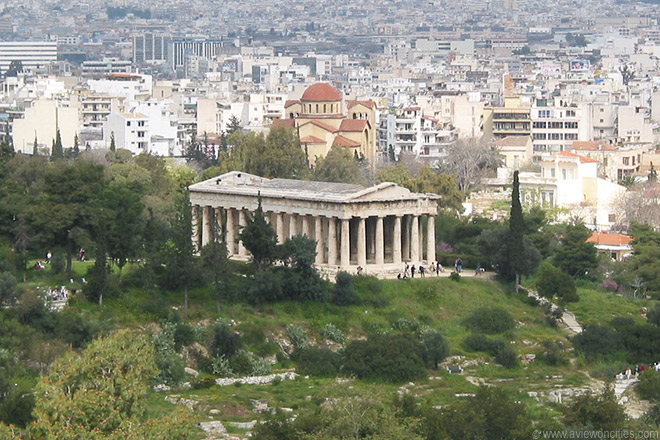