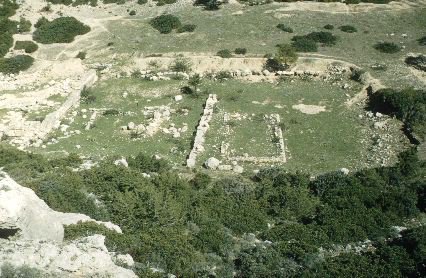 Archaeological Development
Perachora was first excavated by Humfry Payne in the early 1930s. Since then, the excavation has mainly focused on the public buildings by the harbour, while the private buildings of the headland have yet to been studied in detail.

The site is made up of two main complexes: the lower complex by the harbour is the earlier one, generally known as the Heraion Akraia, and where most of the ritual activity seems to have taken place; whereas the upper complex, built later, seems to have held overspill.

The architectural sequence of the complex as a whole is uncertain, especially as the chronology of the votive depositions is debated, made more confusing by the deposits of both the upper and lower complexes overlap chronologically.

Hera Akraia - Akraia was the name of a naiad who was associated with Hera. Therefore, this epithet may be related to the sanctuary's closeness to the sea, and places less emphasis on Hera as a mother. It also means "of the heights," which would refer to the sanctuary's high position.

Hera Limenia - Limenia simply means "of the harbour." This epithet was assumed by Payne because of an inscriped dedication. It may be a secondary epithet to Perachora's key Hera Akraia. However, the Homeric epithet 'Leukolenos' has also been found inscribed in Perachora, and Menadier has pointed to this as a potential alternative.

Sacrifice-
There was an altar nearby to the temple, suggesting sacrifice, like in most of mainland greece, was a key part of ritual activity at Perachora. http://www.perseus.tufts.edu/hopper/artifact?name=Perachora%2c+Triglyph+Altar+of+Hera+Akraia&object=Building

Dedications-
The most significant dedication types were terracotta votives and koulouria. Perachora is most likely to have been the site of one of the earliest Iron Age terracottas in Corinth. This sanctuary also produced much more gold than the sanctuary at Isthmia, despite it being much more popular sanctuary.

Perachora also produced many "cooked" votive offerings which were indicative of great wealth, such as thin sheet gold and votive jewellery. There is also evidence of imports, particularly from Egypt, such as scarabs and faiance.

Other-
Over the past century there has been much debate over whether the Heraion was an oracular centre, as Strabo makes reference to an Oracle of Hera Akraia. In terms of archaeological evidence, Tomlinson points to the deposits found in the "sacred" pool towards the east of the temple complex, but these can be explained by the nearby dining rooms.

So far the evidence for an oracle at Perachora is too underwhelming to suggest anything solid.

As mentioned above there are deposits of dining equipment such as drinking and eating vessels in the pool, as well as burnt debris, amphorae fragments and more drinking and cooking pots elsewhere on the site. This suggests that one of Perachora's key activities was dining.

Because of its fairly isolated position and the later construction of domestic buildings, it seems likely that Perachora's dining activity was largely exclusive.

The development of Perachora is reflected in the growth of the activity in the Corinthia of the 8th century, which suggests that it was an important harbour at this time. It also points to its reliance on the status of its nearby city, Corinth in this instance, despite its remoteness. Its distance may be what made it important however, as it marks the frontier of Corinthian territory.

Though Isthmia appears to be more significant than Perachora in terms of military dedications and displays, Perachora had much more of an abundance of wealth. The reason Isthmia was chosen over Perachora as the key community shrine appears to be partly because Perachora was in a less visible position, and also probably because of tradition.

A domestic site seems to have begun construction shortly after the archaic period. Before this time perachora may have been a useful place for sailors to stop off at to pray, dedicate and sacrifice for safe travels. There are a significant number of extant foreign dedications, particularly from the east, such as the Egyptian scarabs and faiance. There would also have been a largely number of Corinthian visitors, but particularly wealthy people, as the dedications and the dining activity suggests.