The Acropolis was origonally a Mycenaean citadel which transformed into the religious centre of Athens as times became more peaceful. There were many temples built to Athena Polias but the Archaic temple was the first to be a perminent structure, built c.530-500BC. It is positioned between the later loactions of the Erectheon and the Parthenon.

The temple was destroyed by the Persians in 480BC and was left as a ruin for twenty years before being cleared away. Elements of the Temple went into the Erectheon and Parthenon but it was never truely rebuilt. Some of the maisonary was built into the north wall of the acropolis, much of the scuptural program was buried in the Periclean building program and only the opisthedomos survived the destruction, becoming repurposed as a treasury.

The east pediment remains in fragments. It shows Athena at the centre with giants on either side in various stages of falling. The gigantomachy displays the transition from archaic art into the classical. The modesty of clothing, braided hair and facial features are archaic while the movement in the poses pushes into the classical.

As with the later acropolis, sacrifce was carried out on the archaic acropolis. The Great Panathenaea had been being celebrated by the city since as early as 800BC and with the creation of the archaic temple, the procession brough a new peplos to clothe the olive wood cult statue of Athena housed in the temple.

The ruin of the temple remained on the Acropolis for 20 years, the reason for which is uncertain. It is possible that it is due to the Oath of Plataea in which the Greek forces vowed not to rebuild any temples destroyed by the Persians. Thus the ruined temple could act as a monument to the barbarity of the Persians and a reminder of the Athenian's moral superiority.

Ferrari, G. (2002) 'The Ancient Temple on the Acropolis at Athens' in the American Journal of Archaeology vol. 106

Plan of the Archaic Acropolis

Plan of the Archaic Temple of Athena 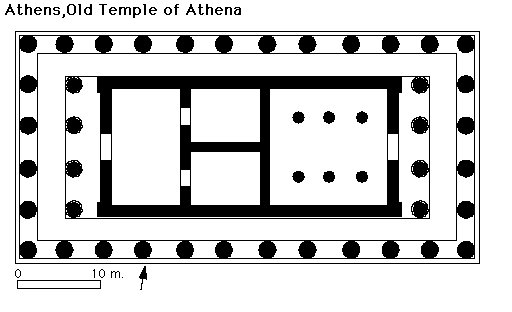