replace this with the names of Gods and Heroes worshipped at the site, along with their epithets and a description of their role/character at this site

Hera has been identified as the patron goddess of Paestum by the abundance of votive offerings, mainly terracotta statuettes, located in and around the sanctuary, depict an enthroned goddess holding a spear, a child, a horse, or a pomegranate. These koutrophos are consistent with koutrophos found at other Heraia, such as at Corinth, Perachora and Olympia. The identification of the associated deity as Hera is further confirmed by a silver plate, bearing an inscription which specifically acknowledges Hera:

"i am sacred to Hera, strengthen our bows"

The Hera cult in the city was linked to an extra urban sanctuary at the mouth of the river Sele, north of Paestum. This, when considered within the context of a cult to Hera, allows us to further speculate on the function of the sanctuary. Most suggestions acknowledge Hera's role as the mother goddess, and thus lead to conclusions that the main function of the cult was to ensure fertility for the local communities and dedicators through active piety. Though little information survives regarding ritual and sacrifice, the remains of an alter infer such active rituals, and the attribution of an extra urban sanctuary could suggest a minor procession.

The influence and prestige of the sanctuary is unclear, but similar koutrophos have been located in nearby/local settlements, which suggests that the temple was significant a tleast in the context of Greeks settled in southern Italy, the size of the sanctuary further suggests this.[1]

As far as we have been able to find out, there are no sources which can shed light on the rules and regulations at either of the temples of Hera at Paestum. Indeed, there is very little literary evidence at all that survives from Paestum, which might have been able to illuminate this issue to us. In the ancient literary sources (e.g. Strabo, Pliny, Solinus) there is nothing on the rules and regulations of the temples in the few places where Paestum/Poseidonia get a mention, and the same goes for the few inscriptions that survive. As if to emphasise the point, follow this link to see what the Director of Paestum Archaeological Park has to say on the paucity of literary evidence: https://www.museopaestum.beniculturali.it/alla-scoperta-di-paestum-nellera-digitale-6/?lang=en

As with “Rules and Regulations” above, the lack of literary evidence is again a hindrance. However, there were two treasuries on both sides of the Hera I temple, and at the back of the temple was an adyton which was used to house some of the Temple’s statues.

According to Strabo, Greek settlers from Sybaris settled the town of Poseidonia in the 7th century BC. [3] The first temple of Hera (termed the Basilica because it was first mistaken for a civic building) is one of the oldest Greek temples in Italy, and would have been built only a generation or two following the original settling of the site. The large number of sites dedicated to Hera within the surroundings of the temples indicates that the Greeks would have assimilated their worship of Hera with a local mother goddess.

Strabo goes on to mention that Poseidonia was conquered by the Lucanians around the end of the 5th century BC. During this time the town was renamed to Paistos. It was again conquered by the Romans in 273 BC when it was given the name Paestum. Throughout all these upheavals worship of Hera at the temples and as part of her cult remained of importance to whoever inhabited Paestum at the time. [3]

Even now the temples remain in remarkably good condition, the site having been largely forgotten until archaeological excavations began in the 18th and 19th centuries.

The site was in use for a long stretch of time. According to Solinus it was the Dorian people who established the community that would build the temples.[4] To these people the worship of Hera must have been of great importance; within the temenos there are another eleven sites dedicated to Hera’s worship. The discovery of gamikoi lebetes (wedding cauldrons) left on the site as offerings indicates that many worshippers would either have been, or prayed on behalf of, young, betrothed women.

Lucanian vases left on the site show that the temples were also used by the Lucanian people who displaced the original Dorian settlers from the late fifth century BC.[5]

The "Basilica" - otherwise the 1st Temple of Hera 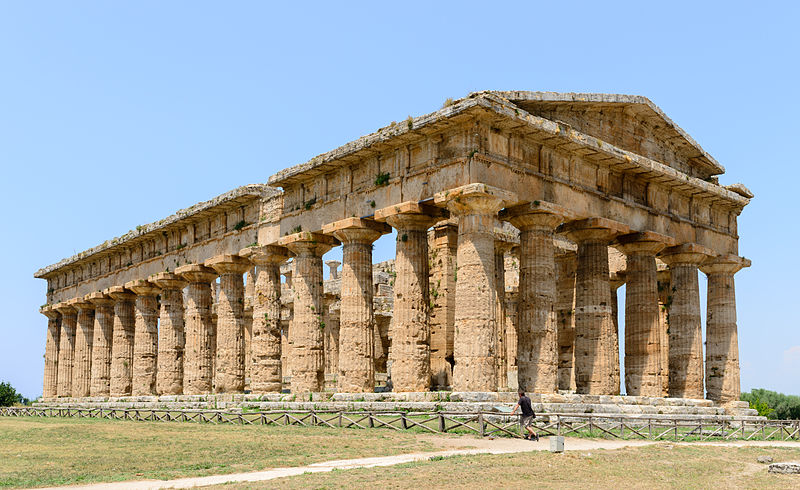 The "Temple of Neptune" - otherwise the 2nd Temple of Hera