The dates of the original temenos are uncertain, but the area itself has been identified as a bronze age religious site, predating the Ionic immigration (according to Pausanias 7.7-8, so such claims could merely be rumours). The first temple was destroyed in around the 7th century BC, presumably by a flood according to archaeological digs and silt deposits. The temple was rebuilt a few centuries later in 550 BC, supposedly funded in part by Croesus, and designed by the Cretan architect Chersiphron (Herodotus 1.92). This was an extremely lavish structure, with marble releifs and two rows of columns. Although it was later destroyed by Herostratus, one can assume the new temple, which later became known as one of the Wonders of the Ancient World, was based on the second reconstruction. Valerius Maximus mentions that this second temple was burned down in 356 BC, although the name of the arsonist was only later mentioned by Theopompus. Most archaeological remains come from the final, third temple of Artemis. Apparently, Alexander the great, upon liberating the city in 334 BC, offered to fund the rebuilding, but the Ephesians refused, stating that "it was inappropriate for a god to dedicate offerings to gods" (Strabo XIV.1.22). It was instead rebuilt from 323 BC, and finished some time after, with more elaborate friezes and over 127 columns. This structure survived for 6 centuries, and was eventually destroyed in a raid by the Goths while under the rule of the emperor Gallienus.

The column drum friezes were particularly impressive, almost twenty feet wide and siz feet high, and each seems to have been decorated with life size figures (for an example, see the Hermes drum in the British museum, which displays at least eight individuals).

In Greek myth, the birthplace of Artemis and Apollo was in a grove, called the Ortygia. According to Strabo, the Ephesians identified an area near the city with the same name, and claimed this was the site of the goddess' birth (Strabo 14.1.20). The Ephesian Artemis was a very different version of the deity than the usual goddess of the hunt; here she was worshipped for fertility. Depictions seem to mirror this, with the deity either wearing a string of eggs or breasts around her shoulders and chest. 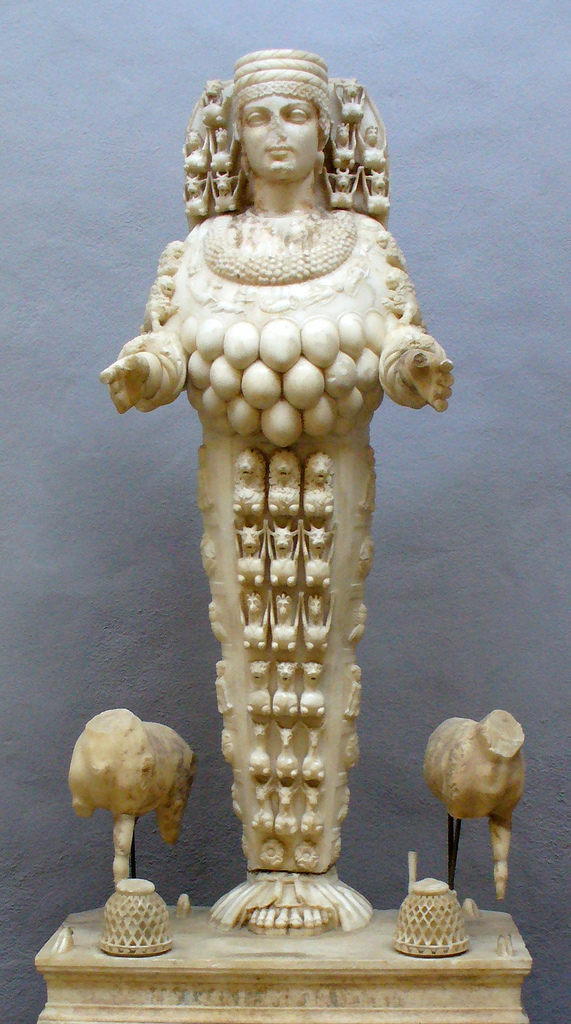 The Artemisia was celebrated in the month of the Artemision (March - April) and presumably involved athletic and musical competitions, as well as plays and theatrical displays. Xenophon of Ephesus describes how this festivity was expanded beyond a religious context, and in fact became a popular event for men and women to choose their fiancés, which apparently drew in both locals and foreign visitors (Xenophon of Ephesus 1.2.2-4).

The temple is most well known for being a member of the seven wonders of the ancient world, a group of architecturally imposing structures that were classified as the most impressive in the Greek world. The list often changes (the lighthouse, or the walls of Babylon are interchangeable) but the first complete reference is by Antipater of Sidon. The list often seemed to be received as a tour guide of the mediterranean:

"I have set eyes upon the wall of lofty Babylon on which lies a chariot road, and the statue of Zeus by the Alpheus, and the hanging gardens, and the Colossus of the sun, and the huge labour of the high pyramids, and the vast tomb of Mausolus; but when I saw the temple of Artemis which rose to the clouds, these other marvels lost their brilliance, and I exclaimed "Lo, apart from Olympus, the sun has never looked upon aught so grand"

The temple, partially due to the fame the incredible structure received, was visited by locals, foreigners and admirers from all over the mediterranean, to the point that the sale of dedications for visitors to Artemis became en economic source for the sanctuary (for example the silver smiths during Paul's visit).

Another interesting fact about the cult of Ephesian Artemis is that not only did she attract tourists and worshippers from afar, but worship of that particular epiphet of the goddess was spread to other cities in the Greek world (Sokolowski.1965.427 also provides an inscription detailing the shipment of ornamental robes for an effigy of Ephesian Artemis at Sardis).

The temple of Artemis seems not only to have been used as a religious site, but also as an institution similar to a bank. Dio Chrysostum describes how the money of private citizens was deposited in the building, and even foreigners and "commonwealths and kings", which was apparently due to the "safety" of the sanctuary. He promptly ironically mentions how the city had been besieged and captured in the past (Dio Chrysostum Or.31.54). It appears at least to have played an important role in the economy of Asia minor, playing a similar role to treasuries at religious sanctuaries in Greece, such as Delphi and Olympia (Strabo 14.1.22, Plutarch Demeter 30.1 and Xenophon Anabasis 5.3.4f also mention this function of the temple). In fact, in the 2nd century AD Aelius Aristides even refers to Ephesus as "the common chancellery of Asia ... and her recourse in need", presumably in reference to the funds contained in the temple (Aelius Orat.23.24). The wealth of the temple was so important, that Lysimachus transferred control of it from the priests to the more trustworthy gerousia (Strabo 14.1.21).

Trebilco, P. (2004) The Early Christians in Ephesus from Paul to Ignatius (Mohr Siebeck)

Sokolowski, F. (1965) A new testimony on the cult of Artemis at Ephesus (Harvard Theological Review)

The remains of the temple are located a small distance from the ancient city of Ephesus, and are on the the edge of the modern Turkish Selçuk. 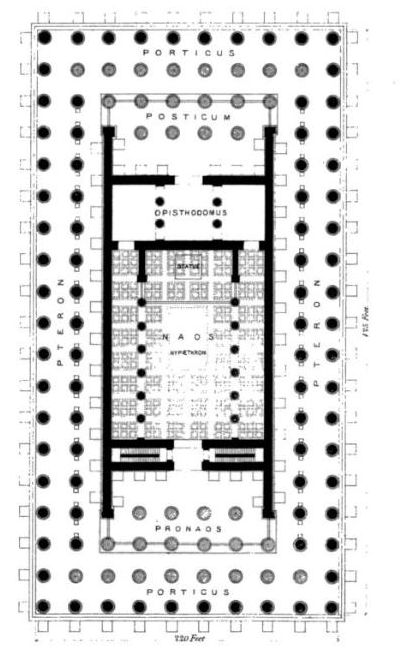