In 1952, the site was first excavated under Oscar Broneer. At the time, it was dated to be from about 700BC, based on a wooden peristyle made in a Doric fashion that he found. However, Herodotus had originally written that the temple was built during the rule of Cypselus in 657BC. Later archaeologists were able to date the site from anywhere between 690-650BC, to better fit the historial source we have on the location.

At the site, Poseidon Isthmos was worshipped, and although there is no evidence that clearly details his specific functions with that epithet, it is clear that the name relates to the strip of land, and that Poseidon was the most fitting god due to his domain of the sea.

Dedications-
A large assortment has been found at the temple, including 128 coins from at least nine different city-states, 6 figurines, athletic equipment, bronze tripods, bronze cast handles, terminals, ladles and decorations, helmets and ceramic vases.
Festivals-
In about 584BC the Isthmian games were founded, supposedly as funeral games for Melicertes. Later, the mythical leader of Athens, Theseus, supposedly expanded these into a Pan-Hellenic games for the worship of Poseidon. These games were held the year before and the year after the Olympic games. Due to the legend, Athenian visitors were granted the privilege of the front-row seats, should they visit.

The Isthmian games were comparable to the Olympic games, however they also included chariot races, pankration, wrestling, boxing, and musical competitions, with evidence that showed women were allowed to compete. Victors would receive a wreath of celery at first, but later this was changed to be a wreath of pine leaves. Athenian victors would also receive 100 drachmas from Athens.

Due to the lack of archaeological evidence, there are no known specific rules for the site, other than that a truce would be declared between armies during the Isthmian games.

As a Pan-Hellenic site, there were major events that took place asides the Isthmian games. In particular, during the year 196BC General Flaminius proclaimed the freedom of the Greeks at the Isthmian games. 50 years later, General Mummius would destroy the Altar of Poseidon during his defeat of Corinth. The Isthmian games were moved to Sicyon, and it was only in 44BC that Caesar had Corinth rebuilt. The Isthmian games return in about 7BC, and flourished until the late 4th century AD, were they were banned as a Pagan ritual.

The temple is known to have been frequented by Athens and Corinth, which explains how it developed its early wealth. Any traveller who needed to cross the isthmus would also pass by the temple, drawing in more visitors. Due to its location near several ports, merchants and traders would arrive, allowing dedications to be made, as seen by coins coming from Aegina, Eretria, Skyros, Naxos and Miletus. Alongside being a popular location from traders further away, it also drew attention from local cities such as Argos, Boeotia and Sikyon. 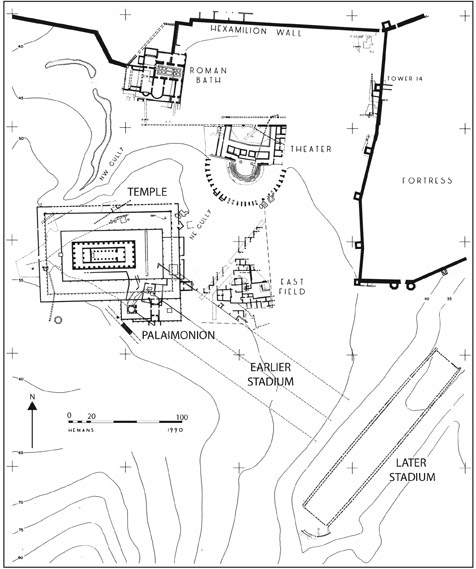