To find your page, see the list under Handouts and click the correct tab on the Archaeological site database.

Please edit the page properties (see here for instructions) to change the title to the name of the archaeological site you will be writing about, then replace the Italicised instructions below with your entry... If you want to know how to add e.g. additional images, podcasts, etc., please see this page. If copying from word, rather than using CTRL-V, please click the small "paste from word" icon (with a 'w') which neatens up the formatting.

It is thought that the Temple of Zeus was the main focus of the sanctuary during ancient times, but instead it was constructed in the years after 471 BC [1]. Pausanias indicates that the temple was paid for with the victory booty from the Eleans' final defeat of Pisa, and was the biggest military commemoration in the sanctuary.

The temple was commemorating a victory where Olympia was the reward, and the temples construction directly served to show the control that the Eleans had over the sanctuary since their victory [2]. While the Temple of Zeus as a statement of victory showed Olympia as exclusive, the temple, according to Scott, was also a means of Olympia showing their "links to the wider Greek world". [3] Furthermore, the Temple of Zeus served as a display of competition and rivalry among the Greeks. [4]

The altar to Zeus had a huge significance, as it was built up from the ashes of all the previous sacrifices. This meant that the altar served as a display of the piety of the people of Olympia, and the extent to which they honoured Zeus Olympios.

The altar Temple of Zeus, made of the ashes of sacrifices, belonged to Zeus Olympios. However, there were many other Zeus' around the sanctuary possessing different epithets. These variety of Zeus' all shared the same name, but each had their own functions and could therefore be seen as their own distinct deity.

Pausanias claims to have found and described all of the statues of Zeus in and around the sanctuary. As well as the Great Statue of Zeus in the sanctuary, he also found 43 others.

The main heroes worshipped at this site were Herakles and Pelops, as the stories of them both were shown on the pediment. Herakles was linked to the area as "the mythological founder of the Olympic games" [6]. The temple of Zeus shows an image of Herakles cleaning the stables of Augeias which, according to Scott, was the first appearance of this local myth in Greek art [7].

Furthermore, Pausanias 5.10.9 describes most of the labours of Herakles as depicted on the pediment. This includes the hunting of the Arcadian boar, his exploit against Diomedes, and him about to receive the burden of holding the world up for Atlas.

At the temple was an altar built from ash, which has now completely disappeared but is recorded in Pausanias’ Guide. The altar was cone shaped and towered 22 feet high (so nearly 7 metres) [8], forming the religious heart of the sanctuary. Though sacrifices to Zeus were made daily (even when the Olympic festival was not occurring), the ashes from sacrifices were kept, made into a paste with the water of the river Alpheius and added to the altar once each year. The sacrifices were allegedly started by Heracles in some accounts, which made the altar particularly noteworthy and sacred. [9]

As well as this, there were over 60 altars around the site, not associated with temples, which are listed by Pausanias [10], and numerous members of staff were charged with caring for them, such as priests, prophets and wine-carriers. [11] This demonstrates the popularity of the site; while most significant altar was that of Zeus as mentioned above, Olympia had clearly developed into a major religious site at which multiple deities were worshipped and sacrificed to.

Pausanias wrote of the votive offerings left in the temple, including dedications left by athletes and even a foreign king. Among the offerings were statues of emperors, bronze horses and a curtain ‘adorned with Assyrian weaving and Phoenician purple’. [12] Compared to Delphi, it seems that the control of what was dedicated and where it was placed was stronger in Olympia. Ancient historians commented on the tightening of Elean control over the sanctuary in the fifth century, and they allegedly refused to allow Corinth to change the inscription on one of their dedications. [13]

The key festival held at this sanctuary was that of the infamous Olympic games, which were held every four years in August. They date from 776 BC, a year often used by ancient Greek historians as the beginning of the dating system when using an Olympiad Calendar. This highlights that, while the games had emerged from a smaller cult of Zeus from the 10th century BC, they had risen to a status of Panhellenic importance and became central to Greek identity and history. [14] Athletes were highly-valued, and received honour and a celebrity status, sometimes in addition to political power. [15] This is highlighted by Herodotus’ account of the Athenian Cylon who attempted to stage a political coup in the seventh century, using his Olympic victory as a basis for his right to political power. [16] Tellingly, Euripides’ play Hippolytus has the protagonist declare he ‘would wish to come first in the Pan-Hellenic competitions, and to be second in politics’ [17], which, though grounded in fiction, reflects the influence held by Olympic athletes.

The Sacred Way: though Pausanias talks about a processional entrance to the sanctuary, this could have been a late addition to the site, or it could have been changed over time. This contrasts the Sacred Way at Delphi, which is more clearly defined. [18]

The rules known to us from this sanctuary often related to the Olympic games:

o “The first of the inscriptions is intended to make plain that an Olympic victory is to be won, not by money, but by swiftness of foot and strength of body. The inscription on the second image declares that the image stands to the glory of the deity, through the piety of the Eleans, and to be a terror to law-breaking athletes.” -Pausanias 5.21.4.

There were also rules and regulations surrounding the ash altar of Olympian Zeus:

Though it might be expected that the Temple would be open during the Olympics, an occurrence every four years, it was actually open all year-round.[23] Its primary function during this time was as a tourist attraction; for this purpose there were guides about the site who would provide tours to visitors.[24] The exact content of these tours is unknown, as Pausanias does not provide a great amount of detail, but one can presume that the guides would have been very familiar with the site and its history from conducting these tours so regularly.

A significant number of additional staff were active across the broader site of Olympia and given the enormity and fame of the statue it is safe to assume it would have been used as a kind of showpiece, particularly with distinguished visitors. Additionally, some staff would have been necessary to conduct the oiling of the statue, which Pausanias alleges kept the ivory from harm by the climate.[25]

Built in Olympia, a famous and important religious site, the Temple of Zeus aggrandised the historical significance of the area. Pausanias tells us that the temple, and the statue within it, though made two decades apart, were funded as a result of Pisa's defeat by the Eleans.[26]

Acclaimed as one of the Seven Wonders of the Ancient World, the statue within the temple had a great deal of importance as a Hellenistic tourist attraction for many centuries.[27]

The Temple suffered damage over time due to both neglect and natural disasters. In the 5th Century AD Theodosius II enforced a ban on pagan festivals, which included the destruction and abandonment of the Temple. A century later the remains of the Temple were completely destroyed by two Earthquakes.[28] The statue in particular, though long since destroyed, remains relevant to modern discussion thanks to its status as one of the Seven Wonders of the Ancient World.

Olympia is one of the most significant sanctuaries in Greece and its popularity is a consequence of its location and the people the site attracted - as a result, this highlighted the significance of the Temple of Zeus itself. There is recognised scholarship that there was prehistoric settlement there but Strabo writes that the fame of the Temple of Zeus comes from a religious background with evidence of sacrifice to Olympian Zeus dating back to 11th Century B.C. The history of the oracle provides evidence that the interpreters by the Iamidai and the Klytiadai. The tradition of Olympia dates back to 776 BC in the creation of the Olympic games. The prominence of athletics in the city led to a political presence where Greek states rivalled each other and there were inter-state relations. As the storyline of the Ancient World develops, the Temple of Zeus would have been visited by those coming to see the monument for Philip II of Macedon. But its popularity would have also been affected in the early Roman rule where Sulla looted the sanctuary in 86BC. Luckily it was revived by Agrippa who repaired the temple and by 2 AD Olympia once again became the hub of athleticism and competition. The continued restoration of the temple until the late 4th century therefore the use of the oracle at the sanctuary and the temple itself would have remained consistent. [29] 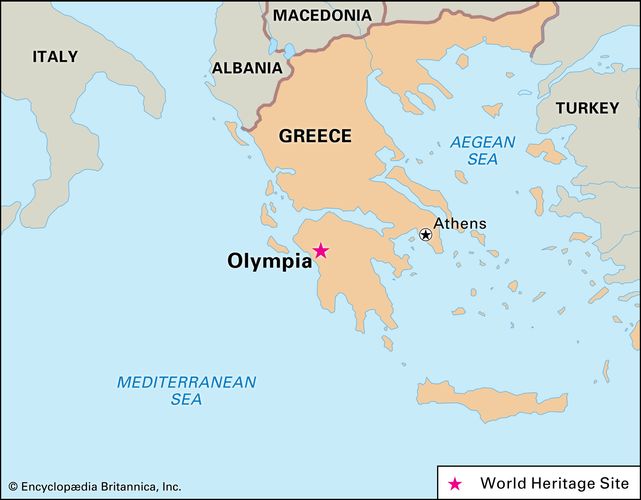