Recorded at our 2019 Class Civ Teachers Day, Dr David Fearn introduceds recent readings of Homer's Iliad and Odyssey, and uses these to orient us towards important and interesting new developments in Homeric thinking. Throughout the talk, Dr Fearn takes the opportunity to relate characterisation to the structure and purpose of epic form in a variety of ways. A handout can be downloaded here.

OCR World of the Hero Resources 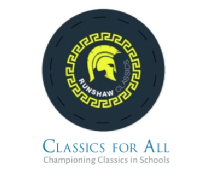 Francesca Grilli from Runshaw College has created a host of amazing videos, including videos on every piece of art in the OCR Greek Art A-level syllabus which she has allowed us to use as part of the WCN/Classics for All resource collaboration. Each video focuses on one artwork from the syllabus and provides a detailed analysis of its background, importance and place within Greece's artistic tradition.

Here Francesca is focusing on The World of the Hero, with videos on exam technique.Francesca is Course Leader for Classics at Runshaw College in Leyland. For more info about Runshaw Classics follow them on Twitter @RunshawClassics, Instagram, or subscribe to their Youtube Channel.

Melvyn Bragg and his guests discuss the Trojan War, one of the best known events of Greek mythology. According to the traditional version of the story, the war began when a Trojan prince, Paris, eloped with the Spartan queen Helen. A Greek army besieged Troy for ten years before the city was finally overrun and destroyed. Some of the most familiar names of Greek mythology are associated with the war, including Achilles and Hector, Odysseus and Helen of Troy - and it has also given us the story of the Trojan Horse.The war is the backdrop for Homer's epic poem The Iliad, and features in many other works from classical antiquity. For centuries it was assumed to be a mythical event. But in the nineteenth century a series of archaeological discoveries provided startling evidence that Troy might really have existed, leading some scholars to conclude that there could even be some truth behind the myth. So does the Trojan War story have any basis in fact? And why has it proved such an enduring legend?With Edith HallProfessor of Classics at King's College LondonEllen AdamsLecturer in Classical Art and Archaeology at King's College LondonSusan SherrattLecturer in Archaeology at the University of SheffieldProducer: Thomas Morris.