The Primary Latin Project is a charity which promotes the teaching and learning of ancient languages in primary schools. They can provide training for teachers and help with resources to run the Minimus Programme in your school.

Hands Up’s Primary Latin course is a free online introduction to the ancient world through the exploration of life in Herculaneum. Learning is supported with archaeological evidence, audio files and worksheets. Hands Up Education is a not for profit organisation and international community of practice, creating and sharing high quality teaching resources. The core focus of our work is on Latin and Classics for a modern curriculum. Includes Lesson Plans.

Why not give your KS2 pupils the opportunity of learning something really very special indeed? Who wouldn't want to learn a bit of Ancient Greek and be able to make sense of that strange alphabet?

Developed for Classics for All, the full Mega Greek course is divided into ten thematic lessons, each consisting of a language and a culture strand. The strands can be taught together or separately. Includes Lesson Plans.

Basil and his friends think everyone should have the chance to learn Ancient Greek and discover more about the culture that laid the foundations of Western civilisation. That’s why Classics For All commissioned Basil’s story to be written, giving students aged 9-12 an enjoyable, accessible and useful introduction to the language, stories and life of Greece in its classical heyday. The book is free to download, but if print copies are required, they can be ordered by contacting Basil here. Includes Lesson Plans. 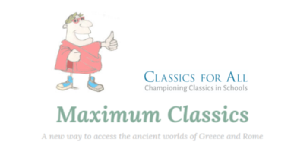 Interest in Classical civilisation and languages is growing in the state secondary sector. However, despite being included in the list of MFL languages, there is no established route to introducing Latin or Ancient Greek in state primary schools. The Maximum Classics course gives pupils from Years 4-6 the opportunity to learn foundation Latin, and to discover the ‘highlights’ of Classical culture. The course is designed to be teachable by incumbent, non-specialist KS2 primary staff after minimal training by a Classics specialist. All classroom-ready plans and materials are available on this site for download. Free in-school training for the course is offered to UK state schools by Classics For All. Includes Lesson Plans.

The resources on the Literacy Through Classics website relate to ancient languages and cultures, and have been designed for primary school age children by Classics staff and students at Swansea University, in collaboration with the Iris Project. They have run a schools' project through which students teach primary school pupils since 2012, and since then more than 200 students, 1,200 pupils, and 20 schools have taken part. You can find out everything about our ongoing project on the About page. Info.

Leicester is one of the most excavated cities in Britain, giving us an exceptional insight into what life was like in the city in the past. This website draws on that incredible resource of archaeological information and the research of the School of Archaeology and Ancient History (University of Leicester). It provides a wealth of information and resources for students, teachers and everyone with an interest in life in the Roman world. Archaeology and Classics in the Community is a unique collaboration between the School of Archaeology and Ancient History, the University of Leicester Archaeological Services and Classics for All. Includes Lesson Plans.

Coming soon. Created by Classics for All, this booklet on Roman Britain contains information on Roman roads, Roman gods, and Roman towns, with a section on an inscription from Lancashire with accompanying comic strip. Will probably include extra teaching resources.

The WCN Roman Coventry Project is a suite of resources which include general information on Prehistoric and Roman Britain, with sections on Rome, Roman Britain, Boudicca, Roman Coventry, Diversity, and Interactions between Romans and Britons. More useful Teaching Resources including lesson plans and PowerPoints are being developed to accompany the site.

British Museum resources for 7-11 year olds. Uncover unique archaeological remains and fascinating treasures from the Roman empire. Explore the impact of Rome on the province of Britannia as coins, the rule of emperors and Roman gods arrived on its shores.

Find out how Britain became part of the Roman world and developed its own distinct identity as an imperial province through our onsite sessions and classroom resources.

BBC Bitesize is an excellent free resource with great activities and video clips on a range of topics, including Prehistoric Britain; Roman Britain; Ancient Greece; Indus Valley; Roman Empire; Shang Dynasty; Ancient Egypt; Understanding evidence. Click on the pictures below to go to each site. Info.

Entertaining clips from Horrible Histories. These can help bring the ancient world to life in a fun and memorable way - Rotten Romans compliation

Coming soon. Developed by Classics for All, this booklet on Greece and Persia contains information on the Greeks and Persians, with a focus on Marathon, Thermopylae, the Parthenon, Athens and Persepolis. Will probably include extra teaching resources.

Part of the University of Cambridge School Classics Project, this website provides free, accessible and engaging materials for teaching Ancient Greece at KS2. The stories for each week are linked by a common theme and provide the introduction to a history topic. Resources include a ‘How to use these materials’ section with information about learning objectives and teaching approaches. Info.

AIE resources illustrate the relevance of ancient Athenian inscriptions, especially those of the classical period (the fifth and fourth centuries BC, c. 500-300 BC), to pre-18 education in the UK and beyond. They aim to support teachers who wish to introduce inscriptions into their teaching as a way of captivating their students’ imagination and fostering enthusiasm for the ancient Greek world.

These resources, consisting of teachers’ notes and slides for classes, underline the textual and visual potential of inscriptions for those engaged with learning about ancient Greek history and civilisation. The idea of an inscription being carved and read “in real life” is a way of fostering the curiosity of students about the past. Accordingly, through inscriptions, learners benefit from the bringing to life of the ancient world, perhaps in a way that helps it seem less abstract and initially less complicated. At the same time, they hope that introducing students at pre-18 level to inscriptions will encourage them to explore ancient source material of their own accord, and will help them to ‘bridge the gap’ into University study if they chose to pursue it. In their Introduction to AIE for Teachers resource you will find more ideas about using inscriptions in the classroom. They also offer a set of slides which introduce learners of all ages to Greek inscriptions: see Introduction to ancient Athenian inscriptions.

From the British Museum. Discover the culture and civilisation of the ancient Greeks. Explore what life in the city states of classical Greece was like and the role of religion in shaping how the Greeks saw themselves and their world. Find out what it meant to be a citizen of classical Athens, the sporting events of the ancient Olympic Games, the heroes and heroines of Greek mythology and the architecture of the Parthenon through our onsite sessions and classroom resources. Our sessions feature a range of types, from digital self-led, presentations, object-handling workshops or digital. Explore our fantastic ancient Greek programme. Ages 7–11. Includes Lesson Plans.

BBC Bitesize is an excellent free resource with great activities and video clips on a range of topics, including Ancient Greece. Info. 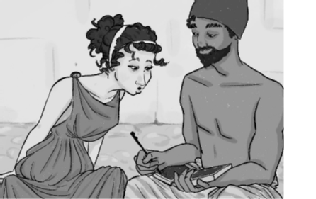 Entertaining clips from Horrible Histories. These can help bring the ancient world to life in a fun and memorable way - Groovy Greeks playlist 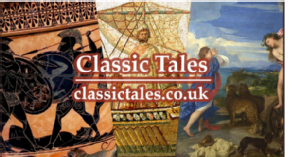 The Faculty of Education at the University of Cambridge have created this suite of free downloadable audio files and teaching resources produced by award-winning storytellers Daniel Morden and Hugh Lupton, suitable for both KS2 and KS3. Tales include Aesop's Fables; Tales of Metamorphoses; The War With Troy; The Return From Troy