Current designs for all-perovskite multi-junction solar cells require mixed-metal Pb–Sn compositions to achieve narrower band gaps than are possible with their neat Pb counterparts. The lower band gap range achievable with mixed-metal Pb–Sn perovskites also encompasses the 1.3 to 1.4 eV range that is theoretically ideal for maximising the efficiency of single-junction devices. Here we examine the optoelectronic quality and photovoltaic performance of the ((HC(NH2)2)0.83Cs0.17)(Pb1−ySny)I3 family of perovskite materials across the full range of achievable band gaps by substituting between 0.001% and 70% of the Pb content with Sn. We reveal that a compositional range of “defectiveness” exists when Sn comprises between 0.5% and 20% of the metal content, but that the optoelectronic quality is restored for Sn content between 30–50%. When only 1% of Pb content is replaced by Sn, we find that photoconductivity, photoluminescence lifetime, and photoluminescence quantum efficiency are reduced by at least an order of magnitude, which reveals that a small concentration of Sn incorporation produces trap sites that promote non-radiative recombination in the material and limit photovoltaic performance. While these observations suggest that band gaps between 1.35 and 1.5 eV are unlikely to be useful for optoelectronic applications without countermeasures to improve material quality, highly efficient narrower band gap absorber materials are possible at or below 1.33 eV. Through optimising single-junction photovoltaic devices with Sn compositions of 30% and 50%, we respectively demonstrate a 17.6% efficient solar cell with an ideal single-junction band gap of 1.33 eV and an 18.1% efficient low band gap device suitable for the bottom absorber in all-perovskite multi-junction cells. 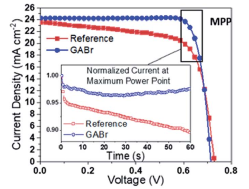 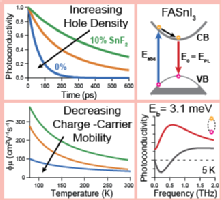