The Astronomy and Astrophysics group at Warwick is interested in a huge range of scales across the Universe: planetary systems, how they form, live and die; stars, stellar binaries and and the exotic physical processes that they allow us to explore; as well as the transient events which mark the end of stellar lifetimes and the galaxies stars inhabit across the Universe. The group started in September 2003 with the appointment of Prof Tom Marsh. We are both an observational and theoretical group, and we make use of a wide range of ground-based telescopes, such as ESO's Very Large Telescope (VLT) in Chile and the Isaac Newton Group of telescopes (ING) in the Canary Islands, or the Atacama Large Millimetre Array (ALMA), as well as space telescopes such as NASA's Chandra and ESA's XMM-Newton X-ray observatories and the Hubble Space Telescope. We are partners in the four large spectroscopic surveys (DESI, SDSS-V, WEAVE, and 4MOST) that will start operations throughout 2020-2021.

Many of the objects we study are dynamic and can change within minutes, seconds and even milli-seconds. We specialise in the high-speed data acquisition and analysis techniques needed to track them. Members of the group have contributed to the development and exploitation of the ULTRACAM high-speed photometer, the Wide Angle Search for Planets project (WASP), the Next Generation Transit Survey (NGTS) and are actively hunting for the counterparts of GW transients with the Gravitational Wave Optical Transient Observer (GOTO) on La Palma . We are also heavily involved in the development of space missions including ESA's Exoplanet missions - PLATO (launch 2024) and CHEOPS. 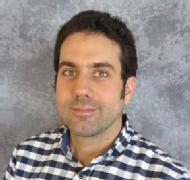 9th December 2020: Dr Pier-Emmanuel Tremblay has been awarded a 2020 European Research Council (ERC) Consolidator Grant worth over €1.9 million. The funded project aims at transforming our understanding of the stellar neighbourhood within about 100 pc of the Sun, which contains the brightest, most easily visible specimens of almost all types of stars and planets, but remains poorly explored. Theoretical and observational development will be conducted to comprehend how white dwarfs and low-mass stars evolve, unlocking the enormous potential of using local stars as cosmic clocks to trace Milky Way formation history at much greater distances. The ERC funding will allow Dr Tremblay to build a team of experts that will be at the forefront of the stellar revolution triggered by the spacecraft Gaia of the European Space Agency and detailed spectroscopic follow-ups from 4MOST in Chile and WEAVE on La Palma in Spain. 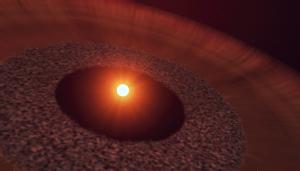 30th November 2020: A unique stage of planetary system evolution has been imaged by astronomers, including Grant Kennedy from the Warwick Astronomy and Astrophysics group. Fast-moving carbon monoxide gas is seen to be flowing away from a star system over 400 light years away, a discovery that provides an opportunity to study how our own solar system developed. Read our press release here.

26th November 2020: Giant planets that developed early in a star system’s life could solve a mystery of why spiral structures are not observed in young protoplanetary discs, according to a new study led by our Sahl Rowther. The research, published in the Astrophysical Journal Letters and part supported by the Royal Society, provides an explanation for the lack of spiral structure that astronomers expect to see in protoplanetary discs around young stars. See the Warwick press release here. 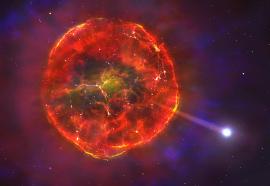 15th July 2020: Thermonuclear blast sends supernova survivor star hurtling across the Milky Way. An exploding white dwarf star blasted itself out of its orbit with another star in a ‘partial supernova’ and is now hurtling across our galaxy at 900 000km/h, according to a new study led by Boris Gänsicke from the Warwick Astronomy and Astrophysics group, published today in the Monthly Notices of the Royal Astronomical Society. It opens up the possibility of many more survivors of supernovae travelling undiscovered through the Milky Way, as well as other types of supernovae occurring in other galaxies that astronomers have never seen before. Have a look at the Warwick press release press release and the paper for free on arXiv. 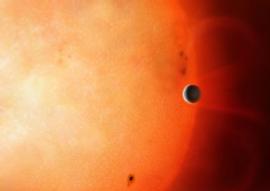 1st July 2020: The exposed core of a giant planet has been discovered revealing a dense Neptune-sized object with a mass 40 times that of the Earth. The surprising find hints at a violent past for the planet, with planetary impacts or tidal disruption required to remove the outer layers of atmosphere. The study led by Warwick astronomer Dr David Armstrong was published in Nature. See the Warwick press release here. 24th April 2020: Hubble turns thirty. On April 24th, 1990, the Hubble Space Telescope was launched onboard the space shuttle Discovery, and was deployed a day later into an orbit that takes it around the Earth once every 96 minutes. Located above the Earth's blurred atmosphere, Hubble has been taking countless stunningly beautiful pictures of planets, stars and galaxies that have kept us breathlessly admiring the beauty of space for the past three decades. Warwick is among Europe's most active Hubble users, and is celebrating this birthday.

23rd April 2020: Dr Joseph Lyman of the Astronomy and Astrophysics group is one of four Warwick academics to receive a highly-prestigious UKRI Future Leaders Fellowship in the third round of awards. Joe's project, titled "New frontiers in transient astrophysics: gravitational-wave multi-messenger events and exotic stellar explosions", is devoted to furthering our understanding of the changing night sky. See the Warwick press release here.

6th March 2020: A Warwick astronomer is amongst the first of the new UKRI Stephen Hawking Fellows announced today. We're delighted to be welcoming Dr Rebecca Nealon who is moving here from the University of Leicester to pursue her research on protoplanetary disks and how they impact the evolution of planets in solar systems outside our own. Rebecca’s simulations have a huge role to play in expanding our understanding of what might be possible elsewhere. Rebecca is also a great communicator who will exploit the focus on public engagement within the Stephen Hawking Fellowship, which we especially welcome, to promote science. The Stephen Hawking Fellowships were launched by UK Research and Innovation (UKRI), working with the Hawking family, in recognition of Stephen Hawking’s exceptional contributions to scientific knowledge and popularisation of science. See the Warwick press release here.

2nd March 2020: A massive white dwarf star with a bizarre, never seen before
hydrogen/carbon atmosphere could be two stellar remnants that merged
together. Less than 50 pc away, this is the first time that a merged white dwarf
has been identified using its atmospheric composition as a clue. This star is
useful in demonstrating how massive white dwarf mergers can get and still
survive without self-annihilation in supernovae Ia. This study led by Dr Mark Hollands has been published in Nature Astronomy, read the Warwick press release here.

2nd March 2020: Dr Farzana Meru from the astronomy and astrophysics group will be swapping simulations for legislation when she visits Matt Western MP at the Houses of Parliament and Whitehall for a week in Westminster. The week (1 – 5 March) is part of a unique pairing scheme run by the Royal Society—the UK’s national academy of science—with support from the Government Office of Science. The scheme allows scientists to learn how government works while at the same time spreading scientific literacy and insight. The Warwick press release can be read here.

20th February 2020: Researchers from our NGTS team have identified an exoplanet on the edge of destruction. The new study, led by our James McCormac, has observed an exoplanet orbiting a star in just over 18 hours, the shortest orbital period ever observed for a planet of its type. It means that a single year for this hot Jupiter – a gas giant similar in size and composition to Jupiter in our own solar system – passes in less than a day of Earth time. Read our press release here.

1st February 2020: The Astronomy and Astrophysics group is delighted to welcome Dr Heather Cegla as a new faculty member and UKRI Future Leaders Fellow. Dr Cegla’s work aims to push the frontiers of astronomy towards the future confirmation and characterisation of habitable alien worlds.

13th January 2020: New work from our Ashley Chrimes and Elizabeth Stanway has used cutting-edge models of stellar evolution to explore the potential progenitors of gamma ray bursts - the brightest explosions amongst the supernovae that end the lives of stars. They found that tidal influence from a binary companion can spin up the star which explodes, making gamma ray bursts more likely. The work is published in Monthly Notices of the Royal Astronomical Society and you can read the Warwick press release here.

5th December 2019: The first giant planet orbiting a white dwarf has been discovered by Dr Boris Gänsicke and his colleagues. Using the Very Large Telescope of the European Southern Observatory, the authors of this study detected a large gaseous disc around the white dwarf, composed of hydrogen, oxygen and sulphur. This disc is formed from the atmosphere of a giant planet, probably similar to Uranus or Neptune that is evaporated by the intense extreme-ultraviolet radiation from the hot (28000K) white dwarf. This study has been published in Nature, read the Warwick press release here.

5th April 2019: An international team lead by Dr Christopher Manser has discovered a planetesimal on a 2 hour period orbiting a white dwarf using a new spectroscopic method. Published in the journal Science, the team has determined that the small body has either a high density and/or a large internal strength, like an iron-dominated planetary core fragment. The method developed in this project can be readily applied to a number of other white dwarf planetary systems, and will hopefully unveil the presence of planetesimals at these systems. The Warwick press release is here.

14 January 2019: Four stars, one circumbinary disk, four different orbital planes. A team led by Royal Society URF Dr Grant Kennedy has discovered an unusual orbital configuration for the circumbinary disk in the HD 98800 quadruple system. In this system the disk orbits one binary pair, but at right angles to the binary orbital plane. While such "polar circumbinary" disks have been posited to exist, this discovery marks the first observational evidence, and provides a hint that planets may be able to form on such orbits. The result is published in Nature Astronomy and the Warwick press release is here. 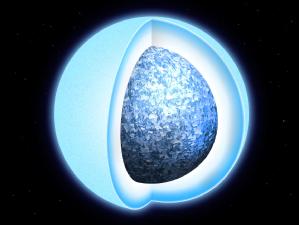 9 January 2019: Data captured by ESA’s galaxy-mapping spacecraft
Gaia have revealed for the first time how white dwarfs, the dead
remnants of stars like our Sun, turn into solid carbon/oxygen spheres
as the hot gas inside them cools down. This process of solidification,
or crystallisation, of the material inside white dwarfs was predicted 50
years ago but it wasn’t until the arrival of Gaia that a Warwick team
lead by Dr Pier-Emmanuel Tremblay were able to observe enough of
these objects with such a precision to see the pattern revealing this
process. The result is published in Nature.

21st October 2018: New research by a team led by Dr Farzana Meru at the University of Warwick has a way of finally telling whether newly forming planets are migrating within the disc of dust and gas that typically surrounds stars or whether they are simply staying put in the same orbit around the star. Finding real evidence that a planet is migrating (usually inwards) within such discs would help solve a number of problems that have emerged as astronomers are able to see more and more detail within protoplanetary discs. In particular it might provide a simple explanation for a range of strange patterns and disturbances that astronomers are beginning to identify within these discs.