I enjoy telling people about the science we get to play with at science fairs (such as the Royal Society Summer Science Exhibition, the Cheltenham Science Festival, Pint of Science and the Big Bang Fair), public talks (such as the BRLSI and the Warwick Christmas Lectures), school events, national TV in several countries and even science stand-up at the Cheltenham Science Festival. I tweet @gavinmorley.

The UK Quantum Technology Showcase was online in 2020 and there is a video of our virtual booth here. This is a demo of our fibre-coupled diamond magnetometer: the most sensitive ever. We also show the steel-scanning application in action.

In 2018 I gave half of the Warwick Physics Colloquium about Arthur Ashkin's Nobel Prize on optical tweezers. The slides are available as Powerpoint (5 MB file) or pdf (2 MB).

We took our diamond magnetometer to the Quantum Technology Showcase in Westminster in November 2018. 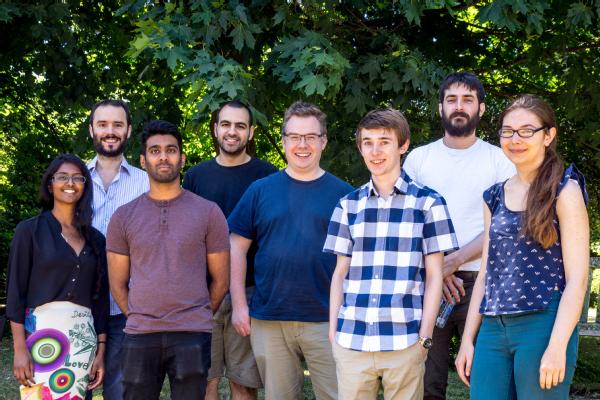 In July 2016 we showed off our diamond magnetometer at the Royal Society Summer Science Exhibition. The diamond fluoresces red when we shine in green light because of the nitrogen-vacancy centres inside. This video shows the optically-detected magnetic resonance spectrum changing as a magnet is moved away from the diamond.

I featured in the Royal Society ‘Parent-Carer-Scientist’ website and book in 2016.

In June 2015 I spoke on a panel at the Cheltenham Science Festival on the topic of "Can We Build A Quantum Computer?" and in "An Evening of Unnecessary Detail" for 600 members of the public.

I created a science activity called ELI5 for over 100 children aged 4-7, and ran it with help from over 30 of their dads, at my daughter's school.

My invited talk at the Bristol Quantum Information Technology (BQIT) meeting on 26th Feb 2014 was titled "Review of State-of-the-Art in Hardware (Solid-State)" and the slides are here as a 14 MB download (CC-by-SA).

I gave a Warwick Physics Christmas Lecture in November 2013 on "Making the Impossible Possible with Quantum Computers":

In July 2013 I gave an Institute of Physics talk at the Bath Royal Literary & Scientific Institution on "How to Build a Quantum Computer":

We have an infra-red camera in our lab:

You can see that I don't have a fever here.

This is me holding a hair-dryer which is on.

This is a MRI video of my brain taken in 2005 when I volunteered, as a healthy subject, for some neuroscience research:

Here is a spin-echo animation I made with POV-Ray:

...and this one illustrates spin-echo decay measurements:

...and both of these spin-echo animations are in the rotating frame illustrated here:

Feel free to make use of these animations but remember to credit me with making them following CC-by-SA. The code runs in POV-Ray and is available here.