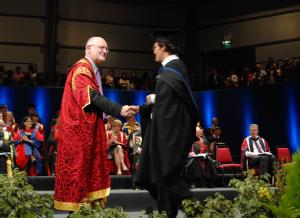 Four leading figures in medicine, museums, sport and the science of climate change are to receive honorary degrees at the Winter Awards Ceremonies later this month.

Nearly two thousand students, mainly from Warwick Business School and the engineering departments, will also take to the stage to receive their honours.

Alumni such as Professor Florens Luoga of the University of Dar Es Salaam will address this year's ceremonies held at the Big Space on Health Centre Road, on the 21st and 22nd January.

Sir Donald Irvine, who becomes an Honorary Doctor of Science, was the first general practitioner to be elected President of the General Medical Council when he took the role in 1995.

Throughout his career Donald has also had extensive teaching and research interests, focused primarily on general practice and on standards of practice and the quality of healthcare.

Robert Neil MacGregor taught History of Art and Architecture at the University of Reading, edited the Burlington Magazine between 1981 and 1987, when he then became director of the National Gallery in London.

He was appointed Director of the British Museum in 2002, has also made numerous television appearances and will become an Honorary Doctor of Letters.

Rajendra Kumar Pachauri is an economist and environmental scientist who has served as the chair of the Intergovernmental Panel on Climate Change (IPCC) since 2002.

In 2007 Pachauri accepted the Nobel Peace Prize on behalf of the IPCC alongside co-recipient Al Gore and will be awarded an Honorary Doctorate of Science.

Melanie Easter was born blind but refused to let this stop her competing at the highest level in the sporting world, winning gold and silver medals at the 1996 Atlanta Olympics and again at the 2000 Games.

Not content to dominate one sport, Melanie has now moved into cycling and triathlon and in 2008 was voted the Disabled Female Athlete of the Year by the British Triathlon Federation and will receive an MA.

Four ceremonies will take place over the two days and traffic on campus is expected to be particularly heavy during the morning and evening rush hours.

If you are attending the Winter Awards Ceremonies, visit their website