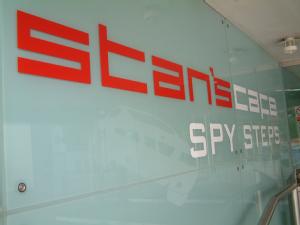 The latest not-quite-theatre production from the Stan's Cafe Theatre Company is now on at the Warwick Arts Centre until the 26th June.

Inspired by teach-yourself-to-dance floor mats, Spy Steps is a performance acted out by the audience itself around the Arts Centre using printed vinyl footsteps, speech bubbles and scenery to direct you and your friends.

Participants are thrust into a cliche-celebrating thriller that re-imagines the University Campus as the secret headquarters of an evil genius bent on world domination.

The Bond-style action is focused on the Arts Centre amongst the unsuspecting public, with its imaginary fish tank, weapons cache and super car, whilst shady figures of patrolling guards and dogs have also appeared across the wider campus.

Spy Steps can be read alone, or explored with friends. Your participation can be as involved or as discrete as you choose it to be and different coloured prints guide performers along different characters' journeys.

The play is free and starts when you want it to. Simply pick up a map from the Box Office after 10am and children and adults alike will enjoy solving the puzzle of what happened by decoding the marks on the walls, floors and doors.

Spy Steps is the latest in a series of experimental theatre shows that have gained Stan's Cafe popular and critical acclaim around the world. Previous appearances at Warwick Arts Centre include The Cleansing of Constance Brown and the rice installation, Of All The People In All The World.

The final week of the run also coincides with SPLAT, the Warwick Student Arts Festival celebrating performance, literature, art and theatre which will be held across campus between 21st and 25th June.