Congratulations to Joan Hibbert and Harry Mangat from the University’s Security team who came joint second in the Association of University Chief Security Officers’ (AUCSO) annual 'Security Officer of the Year award.' Harry and Joan had been nominated for their part in thwarting a burglary at the Art’s centre in January, an action which saw both officers assaulted.

Harry and Joan collected their awards at a dinner held at the prestigious Honourable Artillery Company Headquarters in London on Thursday 15 April. The national competition sees officers nominated from across 114 Universities for their actions throughout the previous year.

We would like to congratulate Joan and Harry on their achievement.

AUCSO provides a forum for its members to exchange knowledge and to keep up to date with crime trends, legislation and other information related to security services. 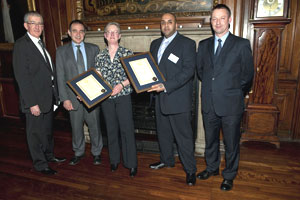