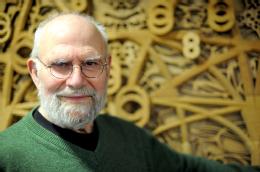 The University of Warwick has announced today, Monday 23rd of December 2013, five of the honorary degrees it is to award at its winter degree ceremonies from 22nd – 24th January 2014, including: a key figure in the opening ceremony of the London 2012 Paralympic Games, and a man once described as the “poet laureate of medicine”. Short biographies on the each of those individuals now follow and more details on press opportunities will be given nearer the time.

Sir Vernon is a well known figure both in business and the arts and has Chair of the British Council since 2010.

Prior to that role he spent all his working life at Accenture in a number of major operational roles overseeing a period of extraordinary growth. From 2000, he was International Chairman with a focus on geographic strategy, the transition to a public company and external relations. He led the company’s global corporate citizenship activities through its pro bono, volunteering and foundations giving activities. He was also the founder Chairman of Accenture Development Partnerships as well as leading Accenture’s activities with the World Economic Forum at Davos.

He is Chairman of Martin Randall Travel and of One Medicare and a non-executive Director of FTI Consulting Inc.

He is President of English National Opera, having been Chairman from 2006-12, was for 6 years a Trustee of the Royal College of Music and is currently Chair of the National Opera Studio. Through his Foundation he supports a wide range of arts organisations and he also organises around 60 concerts a year at his home in London. He has a growing interest and involvement in organisations bringing music experience to schools.

As dance theatre company Motionhouse's Artistic Director Dr Kevin Finnnan has created, either alone or in collaboration with his co-founding director Louise Richards, each of the company’s major touring productions.

He has a history of creating dance spectacles including the acclaimed Machine Dance for JCB diggers and dancers. In 2012 he was Choreographer and Movement Director for the opening ceremony of the London 2012 Paralympic Games. That same year, he created The Voyage for the London 2012 Festival – an enormous outdoor performance event performed on a life size ship in the centre of Birmingham and made in collaboration with Legs On The Wall from Australia. He has also created bespoke performance events to celebrate cultural capital celebrations in Copenhagen and Marseille-Provence.

He has worked with artists from many disciplines including the writer and University of Warwick Associate Professor A.L.Kennedy, installation artist Rosa Sanchez, film-makers Logela Multimedia, set visionary Simon Dormon and international companies such as Legs On The Wall and Vancouver’s Headlines Theatre.

He has an MA in Contemporary Performing Arts from University College Bretton Hall and a PhD in Theatre from Warwick. He is also a visiting Fellow at the University of Warwick and Associate Artist of Greenwich and Docklands International Festival.

Dr Hood was formerly Vice-Chancellor of the University of Oxford, Vice Chancellor of the University of Auckland, and also a member of the Growth and Innovation Advisory Board and the Enterprise Council of the Prime Minister of New Zealand. He has also been a director of New Zealand-based companies, including Fonterra Co-operative Group Ltd and ASB Bank Limited, and was chairman of Tonkin & Taylor Ltd.

He received his PhD in Engineering from Auckland and a Masters of Philosophy in Management Studies from Oxford where he was a Rhodes Scholar. He is now Chair of the Rhodes Trustees.

His many other past and present appointments include chairmanships of The Knowledge Wave Trust, the New Zealand Vice-Chancellors' Committee, Study Group Pty Ltd , URENCO and Universitas 21; President and Chief Executive Officer, Robertson Foundation and Non-Executive Directorships of WPP and BG.

He is one of the founders of the field of behavioural economics and more recently of the field of neuroeconomics. He is past president of the Society for Judgment and Decision Making, and a fellow of the American Academy of Arts and Sciences. Loewenstein's research focuses on applications of psychology to economics, and his specific interests include decision making over time, bargaining and negotiations, psychology and health, law and economics, the psychology of adaptation, the role of emotion in decision making, the psychology of curiosity, conflict of interest, and "out of control" behaviours such as impulsive violent crime and drug addiction. He has published over 200 journal articles and book chapters, and has written or edited 6 books on topics ranging from intertemporal choice to behavioural economics to emotions.

Oliver Sacks is a professor of neurology at NYU School of Medicine and a Visiting Professor at the University of Warwick. His essays and books about people living with various neurological conditions have earned numerous awards and inspired millions of readers around the world and the New York Times has referred to him as "the poet laureate of medicine."

He is best known for his collections of neurological case histories, including The Man who Mistook his Wife for a Hat (1985), Musicophilia: Tales of Music and the Brain (2007) and The Mind’s Eye (2010). Awakenings (1973), his book about a group of patients who had survived the great encephalitis lethargica epidemic of the early twentieth century, inspired the 1990 Academy Award-nominated feature film starring Robert De Niro and Robin Williams.

His most recent book Hallucinations Dr Sacks weaves together stories of his patients and of his own mind-altering experiences to illuminate what hallucinations tell us about the organization and structure of our brains, how they have influenced every culture’s folklore and art, and why the potential for hallucination is present in us all as part of the human condition.

A video of one his lectures while at Warwick and a podcast on interview with him on his most recent book can both be found here:

Lord Whitby is a Conservative peer and former leader of Birmingham City Council, a post he held from June 2004 to May 2012. He is one of three councillors representing the Harborne ward in the west of the city.

He was educated in Smethwick at James Watt Technical Grammar School, and also at Michael's Hoven College in what was then West Germany. He then undertook a period of voluntary work in Germany, helping to rebuild communities destroyed during World War II. He has worked in the cultural sector in Liverpool, and has also lectured in Business and Management Studies. He is currently Chairman and Managing Director of Skeldings, a Smethwick-based engineering company, which won the Birmingham Post Business Award in 2001.

A Fellow of the Institute of Directors Whitby is also President of Marketing Birmingham, Chairman of Birmingham Science Park, Aston and a Board Member of the National Exhibition Centre the West Midlands Regional Development Agency Advantage West Midlands, and the Greater Birmingham & Solihull Local Enterprise Partnership. In the past he has also served as Director of various regional organisations, including the Engineering Employers Federation, the Chamber of Commerce, and the Federation of Small Businesses.