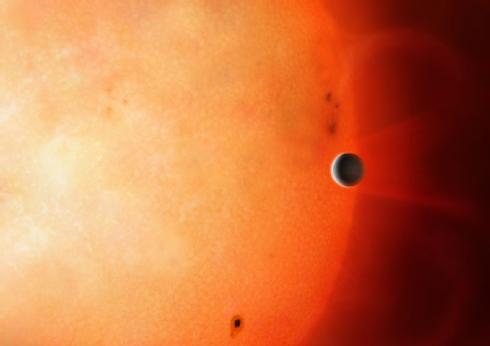 Astronomers from the University of Warwick have observed an exoplanet orbiting a star in just over 18 hours, the shortest orbital period ever observed for a planet of its type.

It means that a single year for this hot Jupiter – a gas giant similar in size and composition to Jupiter in our own solar system – passes in less than a day of Earth time.

The discovery is detailed in a new paper published today (20 February) for the Monthly Notices of the Royal Astronomical Society and the scientists believe that it may help to solve a mystery of whether or not such planets are in the process of spiralling towards their suns to their destruction.

The planet NGTS-10b was discovered around 1000 light years away from Earth as part of the Next-Generation Transit Survey (NGTS), an exoplanet survey based in Chile that aims to discover planets down to the size of Neptune using the transit method. This involves observing stars for a telltale dip in brightness that indicates that a planet has passed in front of it.

At any one time the survey observes 100 square degrees of sky which includes around 100,000 stars. Out of those 100,000 stars this one caught the astronomers’ eye due to the very frequent dips in the star’s light caused by the planet’s rapid orbit.

Lead author Dr James McCormac from the University of Warwick Department of Physics said: “We’re excited to announce the discovery of NGTS-10b, an extremely short period Jupiter-sized planet orbiting a star not too dissimilar from our Sun. We are also pleased that NGTS continues to push the boundaries in ground-based transiting exoplanet science through the discovery of rare classes of exoplanets.

“Although in theory hot Jupiters with short orbital periods (less than 24 hours) are the easiest to detect due to their large size and frequent transits, they have proven to be extremely rare. Of the hundreds of hot Jupiters currently known there are only seven that have an orbital period of less than one day.”

NGTS-10b orbits so rapidly because it is very close to its sun – only twice the diameter of the star which, in the context of our solar system, would locate it 27 times closer than Mercury is to our own Sun. The scientists have noted that it is perilously close to the point that tidal forces from the star would eventually tear the planet apart.

The planet is likely tidally locked so one side of the planet is constantly facing the star and constantly hot - the astronomers estimate the average temperature to be more than 1000 degrees Celsius. The star itself is around 70% the radius of the Sun and 1000 degrees cooler than the Sun, about 4000 degrees. NGTS-10b is also an excellent candidate for atmospheric characterisation with the upcoming James Webb Space Telescope.

Using transit photometry, the scientists know that the planet is 20% bigger than our Jupiter and just over twice the mass according to radial velocity measurements, caught at a convenient point in its lifecycle to help answer questions about the evolution of such planets.

Massive planets typically form far away from the star and then migrate either through interactions with the disc while the planet is still forming, or from interactions with additional planets much further out later in their life. The astronomers plan to apply for time to get high-precision measurements of NGTS-10b, and to continue observing it over the next decade to determine whether this planet will remain in this orbit for some time to come – or will spiral into the star to its death.

Co-author Dr David Brown adds: “It’s thought that these ultra-short planets migrate in from the outer reaches of their solar systems and are eventually consumed or disrupted by the star. We are either very lucky to catch them in this short period orbit, or the processes by which the planet migrates into the star are less efficient than we imagine, in which case it can live in this configuration for a longer period of time.”

Co-author Dr Daniel Bayliss said: “Over the next ten years, it might be possible to see this planet spiralling in. We’ll be able to use NGTS to monitor this over a decade. If we could see the orbital period start to decrease and the planet start to spiral in, that would tell us a lot about the structure of the planet that we don’t know yet.

“Everything that we know about planet formation tells us that planets and stars form at the same time. The best model that we’ve got suggests that the star is about ten billion years old and we’d assume that the planet is too. Either we are seeing it in the last stages of its life, or somehow it’s able to live here longer than it should.”

NGTS is situated at the European Southern Observatory's Paranal Observatory in the heart of the Atacama Desert, Chile. It is a collaboration between UK Universities Warwick, Leicester, Cambridge, and Queen's University Belfast, together with Observatoire de Genève, DLR Berlin and Universidad de Chile. In the UK, the facility and the research is supported by the Science and Technologies Facilities Council (STFC) part of UK Research and Innovation (UKRI).

Artist’s impression of a hot Jupiter orbiting close to a star available to download at the link below. This image is free for use if used in direct connection with this story but image copyright and credit must be University of Warwick/Mark Garlick: https://warwick.ac.uk/services/communications/medialibrary/images/may2019/exoplanet_ngts-4b_-_v4.jpg

The Science and Technology Facilities Council (STFC) is keeping the UK at the forefront of international science and tackling some of the most significant challenges facing society such as meeting our future energy needs, monitoring and understanding climate change, and global security. The Council has a broad science portfolio and works with the academic and industrial communities to share its expertise in materials science, space and ground-based astronomy technologies, laser science, microelectronics, wafer scale manufacturing, particle and nuclear physics, alternative energy production, radio communications and radar.

STFC operates or hosts world class experimental facilities including in the UK the ISIS pulsed neutron source, the Central Laser Facility, and LOFAR, and is also the majority shareholder in Diamond Light Source Ltd.