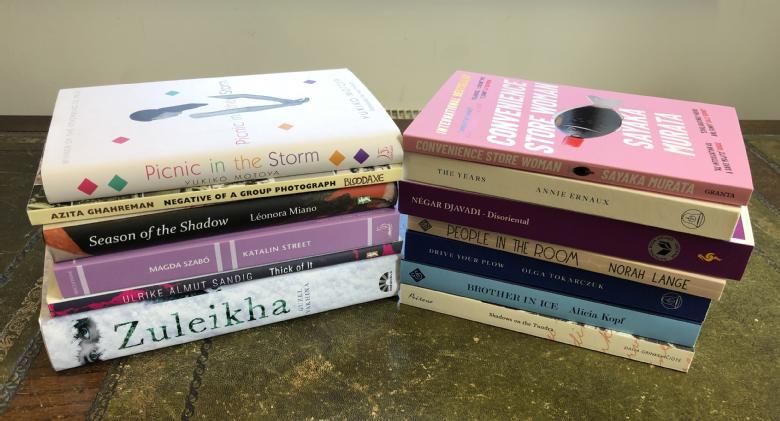 13 titles have been longlisted for the third annual award of the Warwick Prize for Women in Translation.

The £1000 prize was established by the University of Warwick in 2017 to address the gender imbalance in translated literature and to increase the number of international women’s voices accessible by a British and Irish readership.

Among the longlistees are Olga Tokarczuk, whose Man Booker prizewinning novel Flights received a “special mention” in last year’s competition. Tokarczuk is on the longlist with literary crime novel Drive Your Plough Over the Bones of the Dead, translated from Polish by Antonia Lloyd-Jones. Translator Lloyd-Jones appears on the longlist for the third year running.

The 2019 prize is once again being judged by Amanda Hopkinson, Boyd Tonkin and Susan Bassnett. Last year the prize was awarded to the novel Belladonna (Maclehose Press), written by the late Daša Drndić and translated from Croatian by Celia Hawkesworth.

The 2019 competition received a total of 92 eligible entries representing 30 languages, a substantial increase on the number of entries received in both 2017 (58 entries) and 2018 (52 entries). The longlisted titles include 9 novels, 1 collection of short stories, 2 collections of poetry and one work of literary non-fiction, and cover 10 languages, including Catalan, Farsi and Lithuanian, with French and Japanese the languages most represented. 10 publishers have had their titles included on the list, with independent publishers such as And Other Stories, Fitzcarraldo Editions and Seagull Books fielding multiple longlistees.

“With its unique remit and its welcome to all forms of writing, the University of Warwick’s Prize for Women in Translation opens a window onto a literary landscape like no other. This year’s entry, larger than ever before, offered not only a remarkable treasury of global fiction but an especially strong selection of poetry. Our longlist embraces memoir, poetry and experimental narrative as well as a broad spectrum of fictional genres, from the historical saga to the visionary whodunnit.

“Together, these 13 extraordinary titles illuminate a world of women’s writing without borders and without constraints.

“One of the dominant threads in this year’s entries was the recurrence of writing about memory – cultural memory, personal memory, post-trauma memory, refugee memory – and although this was particularly prevalent in the European writing, it also emerged as a strong element in the work of women writers from around the world. From the classical to the cutting edge, every selection on the longlist was made on the basis of the quality and originality of the writing by both author and translator.”

“The substantial increase in the number of entries received for this year’s competition shows that the publishing industry is gradually beginning to respond to initiatives such as the Warwick Prize for Women in Translation, which is part of a much wider activist movement driven by a commitment from individuals such as Meytal Radzinski, who started Women in Translation Month (#WITMonth), and from independent publishers such as And Other Stories, who boldly took up Kamila Shamsie’s call to make 2018 a Year of Publishing Women.

“The work of the literary translation community in the UK and Ireland is vital to the cause of women in translation, and to the visibility of international literature in these insular times.”

The shortlist for the prize will be published in early November. The winner will be announced in an evening ceremony at The Shard in London on Wednesday 20 November. For further information about the prize, please contact the coordinator Chantal Wright at womenintranslation@warwick.ac.uk or 02476 573092.

· Brother In Ice by Alicia Kopf, translated from Catalan by Mara Faye Lethem (And Other Stories, 2018)

· Drive Your Plow Over the Bones of the Dead by Olga Tocarczuk, translated from Polish by Antonia Lloyd-Jones (Fitzcarraldo Editions, 2018)

· Negative of a Group Photograph by Azita Ghahreman, translated from Farsi by Maura Dooley with Elhum Shakerifar (Bloodaxe and Poetry Translation Centre, 2018)

· People in the Room by Norah Lange, translated from Spanish by Charlotte Whittle (And Other Stories, 2018)

· Season of the Shadow by Léonora Miano, translated from French by Gila Walker (Seagull Books, 2018)

· Thick of It by Ulrike Almut Sandig, translated from German by Karen Leeder (Seagull Books, 2018)