€2.48m awarded to Warwick-led project into Rome and Mediterranean coinages of 200 BCE – 64 CE 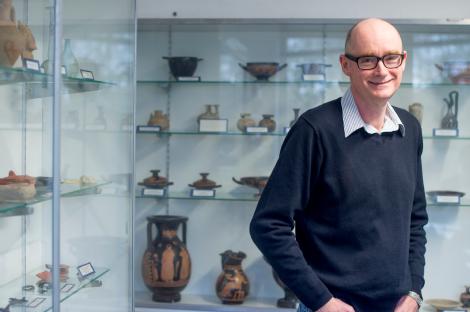 A team led by Professor Kevin Butcher of the Department of Classics and Ancient History, University of Warwick, has been awarded a European Research Council Advanced Grant of 2.48m euros for their project Rome and the Coinages of the Mediterranean, 200 BCE – 64 CE.

The project will examine financial and monetary strategies from c. 150 BCE to a c. 64 CE, a period that witnessed the creation of an overarching currency for the Mediterranean world and increasing monetisation.

Between the middle of the second century BCE and the beginning of the first century CE the Roman empire gained political control of almost the whole of the Mediterranean world and adjacent areas. Roman conquest led to greater economic and monetary integration of the Mediterranean, and coincided with a major increase in long distance trade and probably also economic growth and a rise in per capita income.

Flows of precious metals to Rome and other important centres of power helped to finance Roman expansion, and understanding the chemical composition of silver coinage will transform our understanding of Roman monetary strategy as an instrument of imperialism.

“Coinage was an important feature of identity for ancient Mediterranean communities: a mark of sovereignty and self-government; and silver coinage in particular formed the backbone of state currencies in this period, so much so that the quality of the silver coinage has been taken by historians as an index of the economic health of the state that issued it. Some of the conquered areas were incorporated into the system of Roman money, but others kept their traditional, pre-Roman systems.

“However, over time it looks as if even the non-Roman moneys were gradually adjusted to align more fully with the Roman system. The project will trace these developments in detail. It will also consider the sources of metals used for the coinage: whether freshly-mined or recycled – recycling being an important consideration when thinking about the booty acquired from conquered states, and the manipulation of currencies.

“There are two main strands to the research, which will be undertaken in conjunction with Dr Matthew Ponting of the Department of Archaeology, Classics and Egyptology, University of Liverpool; and Dr Adrian Hillier of the ISIS Neutron and Muon Facility, STFC Rutherford Appleton Laboratory UK; and will also involve museums from around the world that have major collections of ancient coins. One is to gain detailed knowledge of the composition of silver coins and their weight standards between the middle of the second century BCE and the first century CE. This evidence will be used to create a comprehensive account of the evolution and eventual rise to dominance of the Roman monetary system in the Mediterranean.

“The second is to evaluate the reliability of two new and emerging analytical techniques for coins: Laser Ablation Inductively Coupled Mass Spectrometry (LA-ICP-AS) and muonic X-ray Emission Spectroscopy (μXES). The latter is a completely non-destructive technique that will have wider applications to the analysis of museum artefacts in general.”

The project will be advised by a panel of internationally-recognised experts on the coinages of the period, from Austria, Belgium, France and the UK.

“The ERC Advanced Grants back outstanding researchers throughout Europe. Their pioneering work has the potential to make a difference in people’s everyday life and deliver solutions to some of our most urgent challenges. The ERC gives these bright minds the possibility to follow their most creative ideas and to play a decisive role in the advancement of all domains of knowledge”.

The President of the European Research Council (ERC), Professor Jean-Pierre Bourguignon, commented: “Since 2007, the European Research Council has attracted and financed some of the most audacious research proposals, and independent evaluations show that this approach has paid off. With this call, another 222 researchers from all over Europe and beyond will pursue their best ideas and are in an excellent position to trigger breakthroughs and major scientific advances.”