Many complex systems have underlying networks: they have nodes which represent units of the system and their edges indicate connections between the units. In some contexts, the connections are symmetric, but in many they are directed, for example, indicating flows from one unit to another or which units affect which other units. 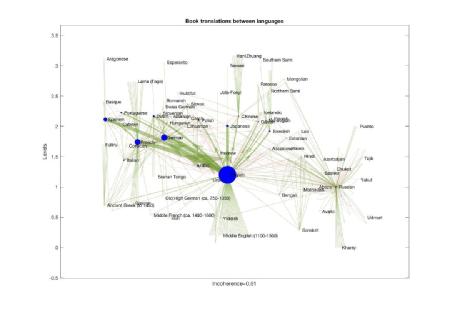 A prime example of this is a food web, in which the nodes represent species and there is a directed edge from each species to those which eat it. In a directed network, the ecological concept of ‘trophic level’ allows one to assign a height to each node in such a way that on average the height goes up by one along each edge.

The trophic levels can help to associate function to nodes, for example, plant, herbivore, carnivore in a food web. The concept was reinvented in economics, where it is called ‘upstreamness’, though it can be traced back to Leontief and the ‘output multiplier’. It is also an ingredient in the construction of SinkRank, a measure of contribution to systemic risk.

Alongside ‘trophic level’, there is also ‘trophic incoherence’; this is the standard deviation of the distribution of height differences along edges and it gives a measure of the extent to which the directed edges fail to line up. The trophic incoherence is an indicator of network structure that has been related to stability, percolation, cycles, normality and various other system properties.

In the paper, ‘How directed is a directed network?’, published today, the 9th September in the journal Royal Society Open Science, researchers from the University of Warwick and the University of Birmingham reveal a new method for analysing hierarchies in complex networks and illustrate it by applications to economics, language and gene expression.

The researchers introduce improved notions of trophic level and trophic coherence, which do not require basal or top nodes, are as easy to compute as the old notions, and are connected in the same way with network properties such as normality, cycles and spectral radius. They expect this to be a valuable tool in domains from ecology and biochemistry to economics, social science and humanities.

Professor Robert MacKay, from the Mathematics Institute at the University of Warwick comments:

“Our method makes hierarchical structure apparent in directed networks and quantifies the extent to which the edges do not line up. We expect it to be useful in disparate contexts, such as determining the extent of influence in a social network or organisational management, assessing the situation of the UK in the face of Brexit trade talks, illuminating how biochemical reaction networks function, and understanding how the brain works.”