Rakie Ayola has received an honorary degree from the University of Warwick for her work in theatre and as a TV actor as well as her production company which aims to increase ethnic representation in the entertainment industry.

Rakie Ayola’s CV spans from acting in Shakespeare plays to films, West End productions and TV. However never did 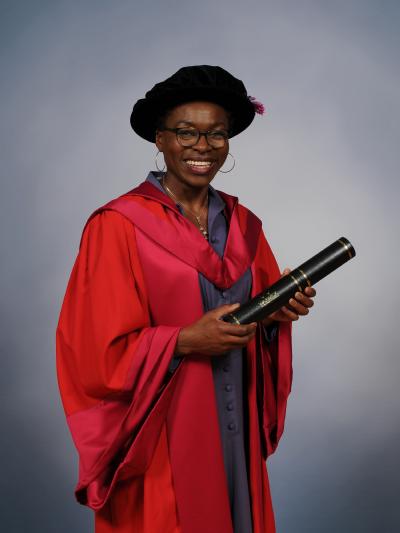 she think she would be awarded an Honorary Degree from the University of Warwick for her work as an actor and her production company.

Upon receiving her Doctorate of Letters on the 22nd July 2019 Ayola said:

“I feel like the Scarecrow in the Wizard of Oz! I feel like someone has said yeah you do have a brain and here’s a certificate to prove it…

“I’ll be facing hundreds of students who have been worked really hard and I’ll just turn up and walk off with my certificate, I’m so happy this is quite surreal.”

Rakie grew up in a council estate in Cardiff. The early loss of her mother caused her to struggle with exams and she decided to leave school before finishing her A-levels in French and Music after being offered an unconditional place to study acting at the Royal Welsh College of Music and Drama.

Ayola said she "wouldn't recommend this," as on arriving at the college she felt as though without any A-level certificates she couldn't prove what she knew, and lacked confidence in front of her peers talking about what A-levels they got, however her drive to make a living by acting got her through it.

She had already had a lot of experience in youth theatre, musicals and plays, but had never engaged with Shakespeare or felt it had any relevance to her. A very old-school tutor drilled her, and the rest of her class, in iambic pentameter and the language of the plays and she was cast in leading roles in A Midsummer Night’s Dream and Macbeth. She admits that she was well outside her comfort zone, but persevered.

After graduation she went on to be cast in several Shakespeare plays, including The Merchant of Venice, in which she played Portia with a very diverse cast in Cardiff in 1992. She came to realise she actually loved Shakespeare, she loved the vocabulary and the freedom to bring the characters to life.

One role she never thought she’d play is Hermione in the West End production of Harry Potter and the Cursed Child, when being cast Rakie said she was shocked:

“If you said write down 100 parts you think you would play, Hermione Grainger would not have been one of them…

“My husband said I think you’ll play Hermione and even then I said no and then I took over from her [Noma Dumezweni], but it was not on my radar at all.”

As well as her career on stage Rakie has been in many TV programmes, including her role as nurse Kyla Tyson in Holby City and starring in an episode of Doctor Who opposite David Tennant in which her character saved the day,

Reflecting on working with David on the episode ‘Midnight,’ Rakie said:

“You never wanted to be the person that messed up, while he had spent hours not messing up for anybody else whenever it was his shot you didn’t want your one word to be the one you got wrong.”

“I spent the whole scene thinking my line, my line, and I think you can see the fear in my eyes! But it was great fun because she [the character] wasn’t very likeable and I like those characters, either you find out why they’re not likeable or they do something wonderful.”

Rakie’s advice for students and those pursuing a career in acting is to re-examine all the things you don’t like, loathe and say you hate, as those things or one of them as one of them may be the thing that propels you forward, she says:

“Don’t dismiss anything, you might be right to hate it but keep reassessing it and allow yourself to change your mind.”

As that’s what she did with Shakespeare plays which got her here today.

High-res images available with Credit to University of Warwick at: https://warwick.ac.uk/services/communications/medialibrary/images/july2019/dsc_0450_edit.jpg

Rakie Ayola after the ceremony with her certificate