The University of Warwick and the city of Coventry has honoured the achievements of Ira Aldridge, one of the greatest figures in both black history and the history of theatre, with a plaque to commemorate the city’s unique links to the African American actor, who died 150 years ago.

Lord Mayor Tony Skipper and guest of honour Earl Cameron CBE, along with his wife Barbara, were joined by the University of Warwick's Provost, Christine Ennew, actors Nick Bailey and Ray Fearon to unveil a plaque on the site of the Coventry Theatre, of which Ira Aldridge had been the manager in 1828. 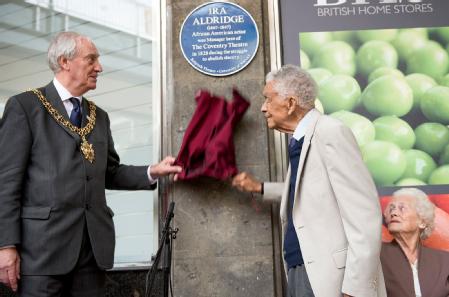 Earl Cameron, an Honorary Graduate of the University, gave a those assembled for the unveiling a performance from Othello to the crowd - who also joined in the celebrations by wishing the veteran actor a Happy 100th Birthday.

Professor Tony Howard, of the University of Warwick’s Department of English and Comparative Literary Studies - who has researched Ira Aldridge’s and one of the leaders of the campaign to secure a memorial to him in Coventry, said:

“It was a very exciting moment, and there has been massive support from the University of Warwick, the Belgrade Theatre, many community groups, the Coventry City of Culture Bid 2021. 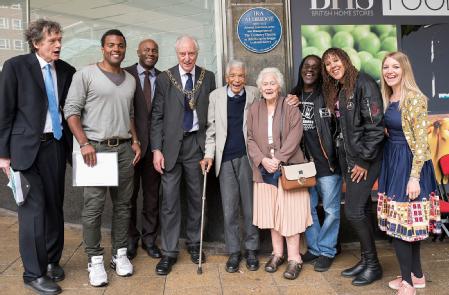 "The fact that, in the age of slavery, a young black actor was not only welcomed into this city but given the keys to its theatre was forgotten for almost two centuries. As soon as they heard the story, dozens of people and organisations collaborated to put up this blue plaque in the heart of Coventry. It tells us something precious about our history and, surely, our future.”

Commenting after the unveiling of the plaque The Lord Mayor of Coventry, Cllr Tony Skipper, said:

"It is heartening to think that our wonderful city that today welcomes people of all faiths and races from around the world, was leading the way back in the early 19th century.

"Ira has an inspiring story that needs to be remembered and re-told. The plaque at the site of the theatre where he made history will keep his name at the heart of our city for all to see.”