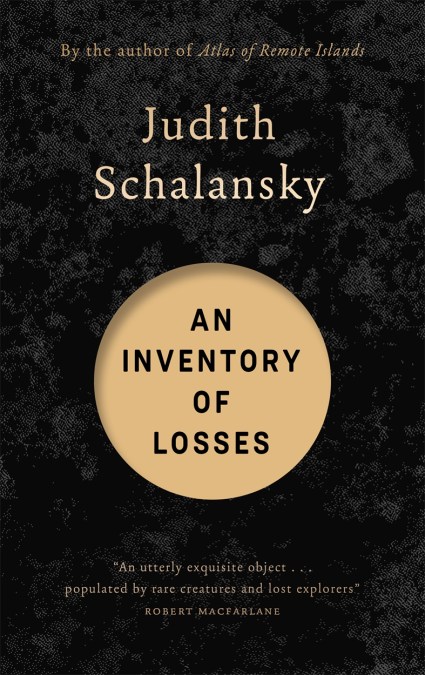 An Inventory of Losses by Judith Schalansky, translated from German by Jackie Smith and published by MacLehose Press, has been announced as the 2021 winner of the Warwick Prize for Women in Translation.

An Inventory of Losses, first published in German in 2018, is an evocation of twelve things that have been lost to the world forever: including the Pacific island of Tuanaki, the love poems of Sappho, the Caspian tiger, a painting by Caspar David Friedrich, and the former East Germany’s Palace of the Republic. This genre-defying work blends history, essay and fiction as it reflects on ways of thinking about extinction and loss.

Boyd Tonkin, one of the judge's for this year's prize, says of An Inventory of Losses:

“At a time when fears about pandemic disease and environmental crisis have deepened our sense of the fragility of life on earth, An Inventory of Losses by the German writer Judith Schalansky offers a set of beautiful, haunting reflections on the loss of precious things – and the ways they may survive. As Schalansky puts it in her bewitching collection of a dozen story-like essays, or essay-like stories, ‘Writing cannot bring anything back, but it can enable everything to be experienced’. From Sappho’s poetry to Garbo’s beauty, extinct beasts to vanished paintings, Ancient Rome to Cold War Berlin, these elegant, elegiac sketches of disappearances, departures and erasures show that we can never bring the past back to life – but that memory and art can put life back into the past.

"The stylistic flair, and variety of voice, in Jackie Smith’s mesmerising translation turn Schalansky’s reminder that ‘Being alive means experiencing loss’ into a journey full of colour, contrast and bittersweet pleasures. An Inventory of Losses is a thoroughly memorable winner of the Warwick Prize for Women in Translation – and one that will surely endure.”

This is translator Jackie Smith’s first literary translation. Smith studied French and German at Selwyn College, Cambridge, then undertook a postgraduate diploma in translation and interpreting at the University of Bradford. In 2015 she was selected for the New Books in German Emerging Translators Programme and in 2017 won the Austrian Cultural Forum London Translation Prize. Her translation of An Inventory of Losses has also won the Helen & Kurt Wolff Translation Prize, and been longlisted both for the International Booker Prize and the National Book Award for Translated Literature.

Judith Schalansky was born in Greifswald in former East Germany in 1980. She lives in Berlin where she works as a freelance writer, book designer and publisher of a prestigious natural history list at Matthes und Seitz. Her books, including the international bestseller Atlas of Remote Islands and The Giraffe’s Neck, have been translated into more than twenty languages.

“Her style is both tautly factual and powerfully imbued with a fascination for what has been lost, but also for what has been recovered. Far from merely compiling an Inventory, Schalansky offers lateral explorations of the apparently unconnected. Readers are drawn to places they might never have dreamt of visiting but which cumulatively map the world anew, extending her earlier Atlas of Remote Islands. A book as much of discoveries - or recoveries - as of losses.”

The judges have also selected a runner-up from the “powerful and eclectic” 2021 shortlist: Strange Beasts of China, by Yan Ge, translated from Chinese by Jeremy Tiang and published by Tilted Axis Press. Boyd Tonkin comments:

“In Strange Beasts of China, Yan Ge imagines a landscape of marvels and terrors that eerily resembles our own everyday world. She draws on the classical Chinese genre of the fantastic bestiary, but places her collection of outlandish creatures – sacrificial beasts, joyous beasts, heartsick beasts and so on – within a modern industrial city that the young narrator has to navigate. Herself an outsider, the heroine finds among these marginal, non-human beings different ways to survive, or to suffer, amid the alienation and insecurity of urban life. Witty, touching and mysterious, these fables of love and loneliness, belonging and exclusion, solidarity and otherness, assume an agile and genial English voice in Jeremy Tiang’s translation.”

The winner and the runner-up were chosen from a diverse shortlist of eight titles that included translations from Chinese, French, German, Japanese, Polish and Russian. Maria Stepanova and her translator Sasha Dugdale featured twice on the shortlist with the collection of poetry War of the Beasts and the Animals (Bloodaxe Books) and In Memory of Memory (Fitzcarraldo Editions).

The 2021 prize is once again judged by Amanda Hopkinson, Boyd Tonkin and Susan Bassnett. The competition received 115 eligible entries. The prize was generously supported for the second year running by the British Comparative Literature Association and the British Centre for Literary Translation.

Submissions for the 2022 Warwick Prize for Women in Translation will open on 1 April 2022.

For more details about the prize, the 2021 shortlist and longlist, and previous winners, see our webpage. We also post regular updates on Twitter and Facebook. Please get in touch if you have a Women in Translation event or news item you would like us to publicise: womenintranslation@warwick.ac.uk