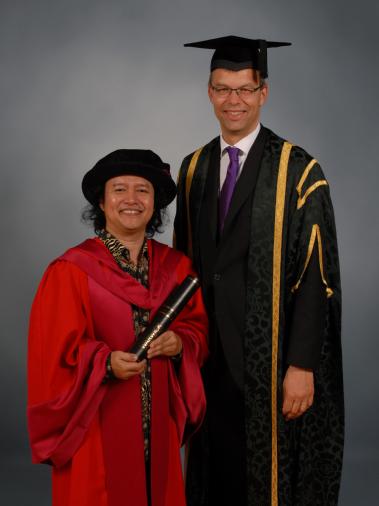 Acclaimed Indonesian author Andrea Hirata has been awarded with an Honorary Doctorate by the University of Warwick.

At a ceremony to award the Honorary Doctorate Professor Jan Palmowski, Pro Vice-Chancellor (Postgraduate and Transnational Education) at the University of Warwick, said:

“We are honoured to celebrate the achievements of a writer who, perhaps more than anyone else, has managed to present a prism into Indonesia’s rich culture, its society, and its extraordinary human potential. And who has succeeded not only in reflecting Indonesian society back to itself, but in inviting all of us to experience, through his work, the Indonesian every-day”.

Mr Hirata published Laskar Pelangi, (The Rainbow Troops), in 2005. The novel, written in a period of six months, was based on his childhood experiences in Belitung and tells the story of a tight-knit group of students and their teachers fighting for education and dignity, even as they face continual hardship; he later described it as "an irony about a lack of access to education for children in one of the world's wealthiest islands."

Discussing the significant role Laskar Pelangi has played in furthering a global understanding of Indonesia and Indonesian culture Professor Palmowski said at the ceremony:

“The book provided an accessible, yet evocative insight into Andrea's school years. The book tells us about the inspiration, creativity and desire to which education can inspire. It tells us about the power of humanity, kindness and wisdom that transforms teachers into educators. It speaks of the transformational power of education irrespective of class, profession or gender. This is a book about Indonesia. And at the same time it is a book about all of us.”

The novel went on to sell five million copies and in 2013 was winner of Germany’s Buchawards and the general fiction prize at the New York Book Festival and has been translated into 34 languages and published in more than 120 countries. Laskar Pelangi has also been adapted to audio books, and its film adaptation is the highest grossing in Indonesian film history with an audience of over 5 million.

After the ceremony, Professor Palmowski said:

“More than ever, there is an increasing awareness in the UK of Indonesia and its vast human potential. Warwick itself is home to a growing community of Indonesian students who have already made a rich contribution to the academic and cultural life of our campus – and who have led in the organisation, in 2015, of the inaugural Warwick ASEAN Conference for students from all over the UK.”