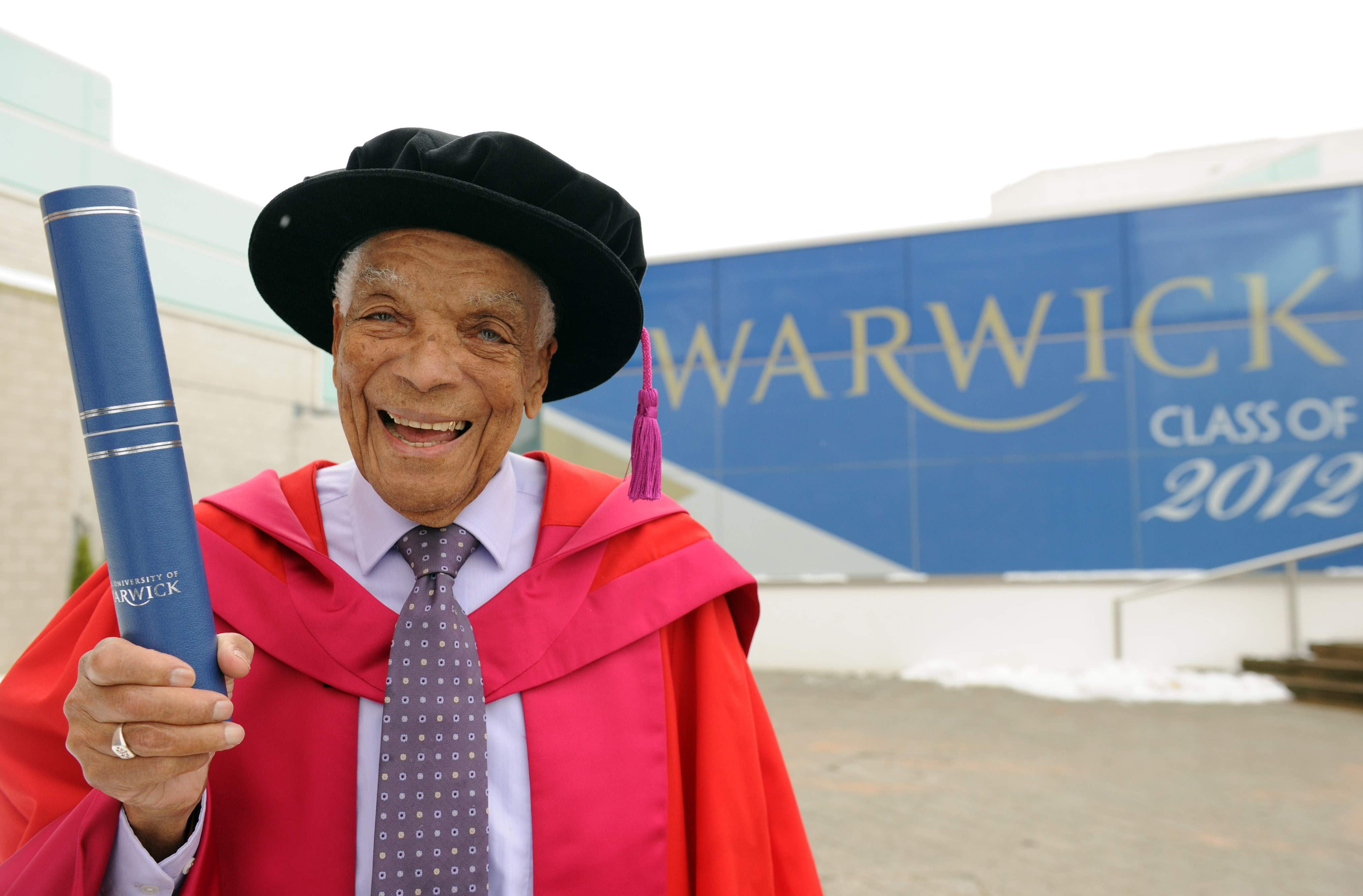 The University of Warwick has announced today, Monday 17th of December, that it is to award honorary degrees to a Warwickshire based actor who has ranged from James Bond to Jackanory, a South African chef and novelist, a famous architect, and a former head of the National Trust, in its winter degree ceremonies on 22nd – 24th January 2013. Short biographies on the four people to be honoured now follow and more details on press opportunities for each of them will be given nearer the time.

Born in Bermuda and now living in Kenilworth in Warwickshire, Earl first arrived in the UK in London on the eve of the Second World War, while working for the Merchant Navy. His acting career began in the 1940s with a number of stage roles including playing alongside Patrick McGoohan in a tour of the play Deep are the Roots which included a visit to Coventry. He became one of the first black actors to break the unofficial "colour bar" in the UK on film and TV, beginning with his breakthrough film acting role in Pool of London, a 1951 film set in post-war London involving racial prejudice, romance and a diamond robbery. Since then he has had major parts in many films, including the James Bond movie Thunderball (1965), in which he played Bond's Caribbean assistant Pinder Romania. Most recently his film roles include Inception (2010), The Interpreter (2005), and The Queen (2006), where he worked alongside Helen Mirren.

Earl has also appeared on a range of popular television shows including Danger Man, The Prisoner, Jackanory, Doctor Who, Dixon of Dock Green, Crown Court, Lovejoy, Waking the Dead, Kavanagh QC, EastEnders and many more.

In 2009 Earl was awarded a CBE for his services to drama and The Earl Cameron Theatre in Hamilton, Bermuda, was named in his honour at a ceremony he attended there on 5 December 2012.

She was awarded the CBE for services to the environment and conservation in 1998, Dame Fiona was then appointed a DBE in 2008.

Prue Leith is a novelist who has also been a food writer, television presenter, cook, caterer, teacher, businesswoman, journalist and charity worker.

Sir David Chipperfield studied at Kingston School of Art and the Architectural Association in London. After graduating he worked at the practices of Douglas Stephen, Richard Rogers and Norman Foster.

He established David Chipperfield Architects in 1984 and the practice currently has over 180 staff at its offices in London, Berlin, Milan and Shanghai. The practice has won over 50 national and international competitions and many international awards and citations for design excellence, including RIBA, RFAC and AIA awards and the RIBA Stirling Prize 2007.

In 1993 Sir David was awarded the Andrea Palladio Prize and in 1999, the Heinrich Tessenow Gold Medal. In 2004 he was made an Honorary Member of the Florence Academy of Art and Design, and was appointed Commander of the Order of the British Empire (CBE) for services to architecture. He was appointed Royal Designer for Industry (RDI) in 2006, and in 2007 he was made an Honorary Fellow of the American Institute of Architects (AIA) and an Honorary Member of the Bund Deutscher Architekten (BDA). He was elected a Royal Academician (RA) in 2008 and In 2009 he was awarded the Order of Merit of the Federal Republic of Germany. In 2010 he was named Knight Bachelor for services to architecture in the UK and Germany. He was awarded the Wolf Prize in Arts in 2010 and the Royal Gold Medal of the Royal Institute of British Architects in 2011.