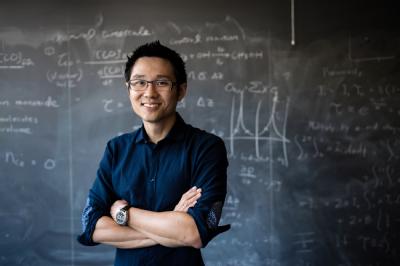 New research involving the University of Warwick describes a new way of calculating phase curves, the ‘shape’ the sunlight that is reflected towards us from planets and moons that can give astronomers information about their surface and atmospheres.

Theoretical astrophysicist Kevin Heng, who is an honorary professor in the University of Warwick Department of Physics as well as director of the Center for Space and Habitability at the University of Bern, Switzerland, has achieved a rare feat: On paper, he has derived novel solutions to an old mathematical problem needed to calculate light reflections from planets and moons. Now, data can be interpreted in a simple way to understand planetary atmospheres, for example. The new formulae will likely be incorporated into future textbooks.

For millennia, humanity has observed the changing phases of the Moon. The rise and fall of sunlight reflected off the Moon, as it presents its different faces to us, is known as a "phase curve". Measuring phase curves of the Moon and Solar System planets is an ancient branch of astronomy that goes back at least a century. The shapes of these phase curves encode information on the surfaces and atmospheres of these celestial bodies. In modern times, astronomers have measured the phase curves of exoplanets using space telescopes such as Hubble, Spitzer, Kepler, TESS and CHEOPS. These observations are compared with theoretical predictions. In order to do so, one needs a way of calculating these phase curves. It involves seeking a solution to a difficult mathematical problem concerning the physics of radiation.

Approaches for the calculation of phase curves have existed since the 18th century. The oldest of these solutions goes back to the Swiss mathematician, physicist and astronomer, Johann Heinrich Lambert, who lived in the 18th century. "Lambert's law of reflection" is attributed to him. The problem of calculating reflected light from Solar System planets was posed by the American astronomer Henry Norris Russell in an influential 1916 paper. Another well-known 1981 solution is attributed to the American lunar scientist Bruce Hapke, who built on the classic work of the Indian-American Nobel laureate Subrahmanyan Chandrasekhar in 1960. Hapke pioneered the study of the Moon using mathematical solutions of phase curves. The Soviet physicist Viktor Sobolev also made important contributions to the study of reflected light from celestial bodies in his influential 1975 textbook. Inspired by the work of these scientists, theoretical astrophysicist Kevin Heng of the Center for Space and Habitability CSH at the University of Bern has discovered an entire family of new mathematical solutions for calculating phase curves. The paper, authored by Kevin Heng in collaboration with Brett Morris from the National Center of Competence in Research NCCR PlanetS – which the University of Bern manages together with the University of Geneva – and Daniel Kitzmann from the CSH, has just been published in Nature Astronomy.

"I was fortunate that this rich body of work had already been done by these great scientists. Hapke had discovered a simpler way to write down the classic solution of Chandrasekhar, who famously solved the radiative transfer equation for isotropic scattering. Sobolev had realised that one can study the problem in at least two mathematical coordinate systems." Sara Seager brought the problem to Heng’s attention by her summary of it in her 2010 textbook.

By combining these insights, Heng was able to write down mathematical solutions for the strength of reflection (the albedo) and the shape of the phase curve, both completely on paper and without resorting to a computer. "The ground-breaking aspect of these solutions is that they are valid for any law of reflection, which means they can be used in very general ways. The defining moment came for me when I compared these pen-and-paper calculations to what other researchers had done using computer calculations. I was blown away by how well they matched," said Heng.

“What excites me is not just the discovery of new theory, but also its major implications for interpreting data”, says Heng. For example, the Cassini spacecraft measured phase curves of Jupiter in the early 2000s, but an in-depth analysis of the data had not previously been done, probably because the calculations were too computationally expensive. With this new family of solutions, Heng was able to analyze the Cassini phase curves and infer that the atmosphere of Jupiter is filled with clouds made up of large, irregular particles of different sizes. This parallel study has just been published by the Astrophysical Journal Letters, in collaboration with Cassini data expert and planetary scientist Liming Li of Houston University in Texas, U.S.A.

"The ability to write down mathematical solutions for phase curves of reflected light on paper means that one can use them to analyze data in seconds," said Heng. It opens up new ways of interpreting data that were previously infeasible. Heng is collaborating with Pierre Auclair-Desrotour (formerly CSH, currently at Paris Observatory) to further generalize these mathematical solutions. "Pierre Auclair-Desrotour is a more talented applied mathematician than I am, and we promise exciting results in the near future," said Heng.

In the Nature Astronomy paper, Heng and his co-authors demonstrated a novel way of analyzing the phase curve of the exoplanet Kepler-7b from the Kepler space telescope. Brett Morris led the data analysis part of the paper. "Brett Morris leads the data analysis for the CHEOPS mission in my research group, and his modern data science approach was critical for successfully applying the mathematical solutions to real data," explained Heng. They are currently collaborating with scientists from the American-led TESS space telescope to analyze TESS phase curve data. Heng envisions that these new solutions will lead to novel ways of analyzing phase curve data from the upcoming, 10-billion-dollar James Webb Space Telescope, which is due to launch later in 2021. "What excites me most of all is that these mathematical solutions will remain valid long after I am gone, and will probably make their way into standard textbooks," said Heng.