• Award highlights his work as patron of charity Classics for All 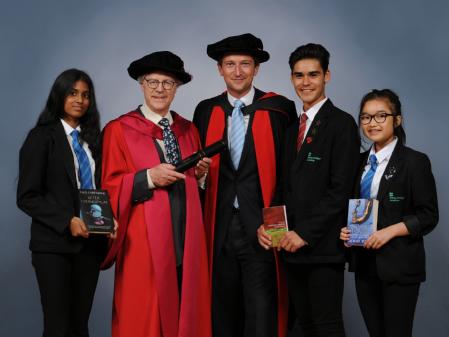 The University of Warwick has honoured an acclaimed Classics expert who has helped open up the ancient world to state school pupils including many in Coventry.

Professor Paul Cartledge received an honorary doctor of letters (Hon DLitt) from the University of Warwick during its summer graduation ceremonies. Professor Cartledge has had a distinguished career as an academic and is the Honorary Patron of Classics For All, a national charity which provides funding for state schools to support the introduction of Latin and other Classical subjects into their curriculum.

He has been a lecturer at the University of Warwick from 1978 to 1979 and has returned to the University many times since to work with staff and students. He was also worked with the Warwick’s Dr Michael Scott on a number of television programmes and he has been an historical consultant, or guest interviewee, on a range of other radio and TV programmes exploring ancient history.

One the schools currently benefiting from the charity Classics For All, is Coventry’s Sidney Stringer Academy in Coventry, which is acting as a local ‘hub’ for Classics in the region. The University of Warwick is supporting this initiative through the involvement of Michael Scott as director of the Sidney Stringer Classics hub, by inviting the school to take part in a Schools’ Classics Drama Day, and also in a Latin Inscriptions project.

Professor Cartledge said: “Over the last fifty years the issue of questioning whether the Classics should be studied has gone.

“Today no-one questions learning another culture or language. Studying the Classics can enhance carer prospects and many leading companies view such qualifications favourably.”

After the ceremony Professor Cartledge spoke to Michael Scott and Sidney Stringer students, Kim Ann Nguyen, Yaqoub Imran and Hita Patel to pay tribute to the school’s Head of Classics Nicola Felton, previously Nicola Neto who passed away in April. She had worked at Sidney Stringer since 1999 and introduced Latin and Ancient Greek to the school.