Author and recent recipient of an Honorary Doctorate from the University of Warwick, Jill Lepore, has been discussing how feminism and pornography both played a part in the creation of the DC comic character Wonder Woman.

Professor Lepore’s book The Secret History of Wonder Woman was a New York Times bestseller and winner of the 2015 American History Book Prize. 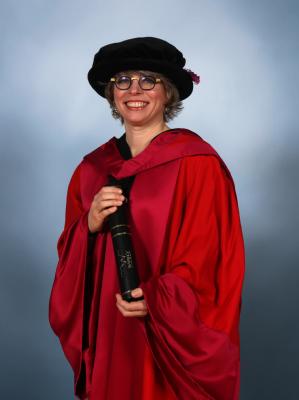 Speaking in an interview just after receiving an Hon DLitt (Honorary Doctor of Letters) from the University she spoke in depth about why she decided to write about the DC comic character’s creator William Moulton Marston, what she discovered about his eccentric domestic arrangement and how he used combined images from the female struggle for independence and pornography to invent Wonder Woman.

It was whilst conducting research for a paper on the history of the lie detector, which William Moulton Marston invented, that she was inspired to write about him. In the interview she said: “I was looking at his academic record…and there was this two sentence, Wikipedia-size blurb about him: ‘William Moulton Marston invented the lie detector in 1913 when he was a sophomore student at Harvard – in 1941 he created Wonder Woman’ – I’m sorry there is not a storyteller in the world who wouldn’t say that is too good to be true!”

Marston lived with the two women in his life; his wife Elizabeth Holloway Marston and his girlfriend Olive Byrne who both influenced Wonder Woman. After his death the two women continued to live together. However, Professor Lepore uncovered that Margaret Sanger, the American birth control activist and an aunt of Olive Byrne, was the inspiration for the comic book character. She also shows that Wonder Woman’s bracelets were inspired by those worn by Olive Byrne and the reason Wonder Woman was often tied up was to represent woman’s feminist struggle, as the suffragettes chained themselves to railings. Wonder Woman lost her super powers when she was tied up, especially when tied up by a man. Women’s emancipation in literature in the US often used chained women as symbols for their struggle.

Professor Lepore is the David Woods Kemper ’41 Professor of American History at Harvard University and a staff writer at The New Yorker, where she has contributed since 2005. She writes about American history, law, literature, and politics. She is currently writing a history of the United States and.

In contrast to the character of Wonder Woman, Professor Lepore has also produced Book of Ages: The Life and Opinions of Jane Franklin, Benjamin Franklin's youngest sister, Jane. Unlike her famous, wealthy brother, Jane lived in obscurity and poverty. However like her brother she was a writer, reader and shrewd political commentator. Professor Lepore reveals that Jane Franklin was an inspiration to her and her mother, and during her own early writing career she unsuccessfully rushed to get the book written and published before her mother’s death.