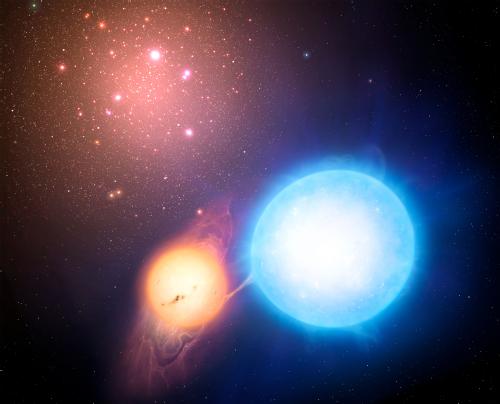 Globular clusters could be up to 4 billion years younger than previously thought, new research led by the University of Warwick has found.

Comprised of hundreds of thousands of stars densely packed into a tight ball, globular clusters had been thought to be almost as old as the Universe itself - but thanks to newly developed research models it has been shown that they could be as young as 9 billion years old rather than 13 billion.

The discovery brings into question current theories on how galaxies, including the Milky Way, were formed - with between 150-180 clusters thought to exist in the Milky Way alone - as globular clusters had previously been thought to be almost as old as the Universe itself.

Designed to reconsider the evolution of stars, the new Binary Population and Spectral Synthesis (BPASS) models take the details of binary star evolution within the globular cluster into account and are used to explore the colours of light from old binary star populations - as well as the traces of chemical elements seen in their spectra.

The evolutionary process sees two stars interacting in a binary system, where one star expands into a giant whilst the gravitational force of the smaller star strips away the atmosphere, comprising hydrogen and helium amongst other elements, of the giant. These stars are thought to be formed as the same time as the globular cluster itself.

Through using the BPASS models and calculating the age of the binary star systems the researchers were able to demonstrate that the globular cluster of which they are part was not as ancient as other models had suggested.

The BPASS models, developed in collaboration with Dr JJ Eldridge of the University of Auckland, had previously proven effective in exploring the properties of young stellar populations in environments ranging from our Milky Way all the way out to the edge of the Universe.

Discussing the BPASS models and their findings Dr Elizabeth Stanway, of the University of Warwick’s Astronomy and Astrophysics Group and the new finding’s lead researcher, said:

“Determining ages for stars has always depended on comparing observations to the models which encapsulate our understanding of how stars form and evolve. That understanding has changed over time, and we have been increasingly aware of the effects of stellar multiplicity - the interactions between stars and their binary and tertiary companions.

Dr Stanway suggests that the research’s findings point to new avenues of enquiry into how massive galaxies, and the stars contained within, are formed:

“It’s important to note that there is still a lot of work to do - in particular looking at those very nearby systems where we can resolve individual stars rather than just considering the integrated light of a cluster - but this is an interesting and intriguing result.

“If true, it changes our picture of the early stages of galaxy evolution and where the stars that have ended up in today’s massive galaxies, such as the Milky Way, may have formed. We aim to follow up this research in future, exploring both improvements in modelling and the observable predictions which arise from them.”

The paper, Reevaluating Old Stellar Populations, has been accepted for publication by the Monthly Notices of the Royal Astronomical Society (DOI: 10.1093/mnras/sty1353). To read the paper click here.

﻿Image: Binary star evolution within a globular cluster - copyright Mark A. Garlick/University of Warwick. Free to use with credit.