New research at the University of Warwick has (pardon the pun) put a new spin on a mathematical analogy involving a jumping grasshopper and its ideal lawn shape. This work could help us understand the spin states of quantum-entangled particles. 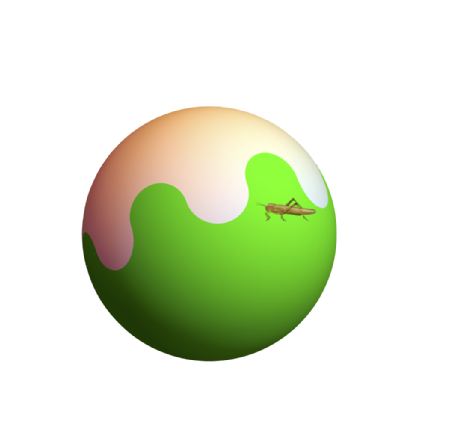 The grasshopper problem was devised by physicists Olga Goulko (then at UMass Amherst), Adrian Kent and Damián Pitalúa-García (Cambridge). They asked for the ideal lawn shape that would maximize the chance that a grasshopper, starting from a random position on the lawn and jumping a fixed distance in a random direction, lands back on the lawn. Intuitively one might expect the answer to be a circular lawn, at least for small jumps. But Goulko and Kent actually proved otherwise: various shapes from a cogwheel pattern to some disconnected patches of lawn performed better for different jump sizes (link to the technical paper).

Beyond surprises about lawn shapes and grasshoppers, the research provided useful insight into Bell-type inequalities relating probabilities of the spin states of two separated quantum-entangled particles. The Bell inequality, proved by physicist John Stewart Bell in 1964 and later generalised in many ways, demonstrated that no combination of classical theories with Einstein’s special relativity is able to explain the predictions (and later actual experimental observations) of quantum theory.

The next step was to test the grasshopper problem on a sphere. The Bloch sphere is a geometrical representation of the state space of a single quantum bit. A great circle on the Bloch sphere defines linear polarization measurements, which are easily implemented and commonly used in Bell and other cryptographic tests. Because of the antipodal symmetry for the Bloch sphere, a lawn covers half the total surface area, and the natural hypothesis would be that the ideal lawn is hemispherical. Researchers in the Department of Computer Science at the University of Warwick, in collaboration with Goulko and Kent, investigated this problem and found that it too requires non-intuitive lawn patterns. The main result is that the hemisphere is never optimal, except in the special case when the grasshopper needs exactly an even number of jumps to go around the equator. This research shows that there are previously unknown types of Bell inequalities.

One of the paper’s authors – Dmitry Chistikov from the Centre for Discrete Mathematics and its Applications (DIMAP) and the Department of Computer Science, at the University of Warwick, commented:

“Geometry on the sphere is fascinating. The sine rule, for instance, looks nicer for the sphere than the plane, but this didn’t make our job easy.”

The other author from Warwick, Professor Mike Paterson FRS, said:

“Spherical geometry makes the analysis of the grasshopper problem more complicated. Dmitry, being from the younger generation, used a 1948 textbook and pen-and-paper calculations, whereas I resorted to my good old Mathematica methods.”

The paper, entitled ‘Globe-hopping’, is published in the Proceedings of the Royal Society A. It is interdisciplinary work involving mathematics and theoretical physics, with applications to quantum information theory.

The research team: Dmitry Chistikov and Mike Paterson (both from the University of Warwick), Olga Goulko (Boise State University, USA), and Adrian Kent (Cambridge), say that the next steps to give even more insight into quantum spin state probabilities are looking for the most grasshopper-friendly lawns on the sphere or even letting the grasshopper boldly go jumping in three or more dimensions.