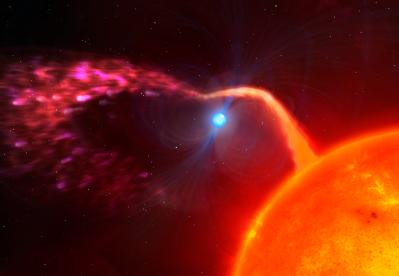 A white dwarf star that completes a full rotation once every 25 seconds is the fastest spinning confirmed white dwarf, according to a team of astronomers led by the University of Warwick.

They have established the spin period of the star for the first time, confirming it as an extremely rare example of a magnetic propeller system: the white dwarf is pulling gaseous plasma from a nearby companion star and flinging it into space at around 3000 kilometres per second.

Reported today (22 November) in the journal Monthly Notices of the Royal Astronomical Society: Letters, it is only the second magnetic propeller white dwarf to have been identified in over seventy years thanks to a combination of powerful and sensitive instruments that allowed scientists to catch a glimpse of the speeding star.

A white dwarf is a star that has burnt up all of its fuel and shed its outer layers, now undergoing a process of shrinking and cooling over millions of years. The star that the Warwick team observed, named LAMOST J024048.51+195226.9 – or J0240+1952 for short, is the size of the Earth but is thought to be at least 200,000 times more massive. It is part of a binary star system and its immense gravity is pulling material from its larger companion star in the form of plasma.

In the past, this plasma was falling onto the white dwarf’s equator at high speed, providing the energy that has given it this dizzyingly fast spin. Put into context, one rotation of the planet Earth takes 24 hours, while the equivalent on J0240+1952 is a mere 25 seconds. That’s almost 20% faster than the confirmed white dwarf with the most comparable spin rate, which completes a rotation in just over 29 seconds.

However, at some point in its evolutionary history J0240+1952 developed a strong magnetic field. The magnetic field acts a protective barrier, causing most of the falling plasma to be propelled away from the white dwarf. The remainder will flow towards the star’s magnetic poles. It gathers in bright spots on the surface of the star and as these rotate in and out of view they cause pulsations in the light that the astronomers observe from Earth, which they then used to measure the rotation of the entire star.

Lead author Dr Ingrid Pelisoli of the University of Warwick Department of Physics said: “J0240+1952 will have completed several rotations in the short amount of time that people take to read about it, it is really incredible. The rotation is so fast that the white dwarf must have an above average mass just to stay together and not be torn apart.

“It is pulling material from its companion star due to its gravitational effect, but as that gets closer to the white dwarf the magnetic field starts to dominate. This type of gas is highly conducting and picks up a lot of speed from this process, which propels it away from the star and out into space.”

J0240+1952 is one of only two stars with this magnetic propeller system discovered in over past seventy years. Although material being flung out of the star was first observed in 2020, astronomers had not been able to confirm the presence of a rapid spin that is a main ingredient of a magnetic propeller, as the pulsations are too fast and dim for other telescopes to observe.

To visualise the star at that speed for the first time, the University of Warwick team used the highly sensitive HiPERCAM instrument, jointly operated by Warwick and the University of Sheffield with funding from the European Research Council. This was specially mounted on the largest functioning optical telescope in the world, the 10 metre diameter Gran Telescopio Canarias in La Palma, to capture as much light as possible.

“These kinds of studies are possible thanks to the unique combination of the fast imaging capability of HiPERCAM with the largest collecting area in the world provided by GTC,” said Antonio Cabrera, Head of GTC Science Operations.

Co-author Professor Tom Marsh from the University of Warwick Department of Physics adds: “It’s only the second time that we have found one of these magnetic propeller systems, so we now know it’s not a unique occurrence. It establishes that the magnetic propeller mechanism is a generic property that operates in these binaries, if the circumstances are right.

“The second discovery is almost as important as the first as you develop a model for the first and with the second you can test it to see if that model works. This latest discovery has shown that the model works really well, it predicted that the star had to be spinning fast, and indeed it does.”

Artist’s impression available to download at the link below. Images are free for use if used in direct connection with this story but image copyright and credit must be University of Warwick/Mark Garlick:

Caption: Artist impression of LAMOST J024048.51+195226.9, the fastest spinning confirmed white dwarf and only second ever magnetic propeller known. Material is being pulled from the companion and flung into space at high speed. A small fraction of it is accreted, gathering in bright spots that rotate in and out of view, which allowed the detection of the rotation period. (Credit: University of Warwick/Mark Garlick)

Since its foundation in 1925 the Leverhulme Trust has provided grants and scholarships for research and education, funding research projects, fellowships, studentships, bursaries and prizes; it operates across all the academic disciplines, the intention being to support talented individuals as they realise their personal vision in research and professional training. Today, it is one of the largest all-subject providers of research funding in the UK, distributing approximately £100m a year. For more information about the Trust, please visit www.leverhulme.ac.uk and follow the Trust on Twitter @LeverhulmeTrust

The ERC, set up by the European Union in 2007, is the premier European funding organisation for excellent frontier research. It funds creative researchers of any nationality and age, to run projects based across Europe. The ERC offers four core grant schemes: Starting Grants, Consolidator Grants, Advanced Grants and Synergy Grants. With its additional Proof of Concept Grant scheme, the ERC helps grantees to bridge the gap between their pioneering research and early phases of its commercialisation.

The ERC is led by an independent governing body, the Scientific Council. Since 1 November 2021, Maria Leptin is the new President of the ERC. The overall ERC budget from 2021 to 2027 is more than €16 billion, as part of the Horizon Europe programme, under the responsibility of the European Commissioner for Innovation, Research, Culture, Education and Youth, Mariya Gabriel.