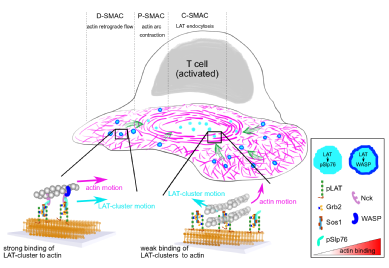 Two proteins that act as a ‘clutch’ in cells to put them in gear and drive our immune response have been identified for the first time.

A team of biochemists and cell biologists—gathered from the University of Warwick (UK), the University of Texas Southwestern (UTSW) Medical Center (USA), University of California, San Francisco (UCSF) (USA), and from the National Centre for Biological Sciences (NCBS-TIFR), Bangalore (India) — working together at the Marine Biological Laboratory, Woods Hole in the United States thanks to funding by the Howard Hughes Medical Institute — have uncovered a process within cells that shows how they move contents around inside them. It appears that they move in a manner similar to switching gears in a car.

The research, published in the journal eLife, could give insights into the mechanisms that activate immune cells and could eventually drive the development of new treatments.

The research focused on the composition of protein condensates – clusters of different types of proteins bound together that are found inside cells. These condensates have been found to play significant roles in many biological processes, and have also been implicated in diseases, including Huntington's disease, amyotrophic lateral sclerosis, and several types of cancer.

One system that protein condensates play an important role in is the activation of T cells, which are very important for producing antibodies and for communicating to the rest of the body that there is an infection present. T cells are constantly screening for small amounts of antigen presenting cells, which are vital for an effective adaptive immune response, so have to be easily but accurately triggered.

When a T cells binds to an antigen presenting cell, the T cell receptors are activated, and a cascade of processes are triggered. The T cell starts to rearrange its cortex and create a zone around these receptors called the immunological synapse.

A network of filaments within the cell made from actin guides a condensate carrying a protein called LAT from the cell periphery towards the centre of the cortex continuously to keep the T cell activated.

The researchers were able to demonstrate that two adaptor proteins, Nck and N-WASP/WASP, act like a ‘clutch’ in a car, allowing the condensate to slot into the correct gear position and speed up its progress to the centre of the cell.

The discovery sheds light on the control mechanisms for the activation of our immune response, and potentially could open opportunities to design T cells that are only active for particular problems.

“For this research, colleagues rebuilt these condensates in vitro to demonstrate that LAT can be the seed for forming these protein assemblies. We then combined this system with a rebuilt actin cortex system to get a better understanding of what happens to phase-separating protein bunches in the vicinity of an actively moving actin network.

“Depending on which modular molecules are used in the LAT clusters, their interaction with actin changes. It’s a bit like a clutch in your car, some molecules interact weakly with the actin, but by adding another molecule they will interact much more strongly.

“Using this reconstituted system allowed us to make much more minute changes to the protein condensate composition that would not be so easy to do in the live cell.”

Professor Satyajit Mayor (NCBS-TIFR) commented on the unique way in which scientists from different institutes and continents came together with their respective experience and expertise to collaborate on solving a central question that is emerging in the new area of phase separating membrane-less molecular assemblies.

He comments: “This effort was made possible by a unique collaboration. An idea supported by Howard Hughes Medical Institute (HHMI), produced the ‘HHMI/MBL Summer Institute’, (organized primarily by the HHMI investigators Mike Rosen (UTSW), Ron Vale (UCSF) and Jim Wilhelm (UC San Diego) to study the mechanisms that control the composition and consequent function of these exciting phases in living cells. While the lead author of this study, Jon, was reconstituting the phase separating T Cell receptor signalling complex (at UTSW) along with Xiaolei Su (at UCSF), Darius brought his in vitro actomyosin membrane cortex (developed at the NCBS) to the heady collaborative atmosphere of the Marine Biological Laboratory in Woods Hole, Massachusetts. The natural consequence was to mix one system with the other. The understanding gained from this active mixture provided crucial insights into the functioning of the molecular clutch that couples the T cell signalling complex with a centripetally moving acting cytoskeleton. This coupling in turn regulates the function of T cell receptors in aiding the immune system to recognize foreign antigens.”

Dr. Michael Rosen echoes this sentiment, adding: “The Summer Institute brought together scientists from across the globe to participate in a unique collaborative environment at the MBL. By living and working together for eight weeks over several summers, we were able to make scientific discoveries that would have been impossible for any of our groups individually. The work described in our eLife paper, combining extremely complex biochemistry with cutting-edge imaging and image analysis, exemplifies the spirit and accomplishments of the Summer Institute.”

Caption and credit: Schematic depicting the molecular clutch that is in action during T cell activation. The composition of LAT clusters changes on its travel towards the center leading to changes in their binding to the actin network: in the distal supramolecular activation cluster (D-SMAC) zone, LAT clusters contain Nck and WASP and bind strongly to actin network leading to their transport together with the actin retrograde flow; at the transition to the peripheral SMAC, characterized by concentric organized acto-myosin arcs, LAT clusters loose Nck and WASP leading to a weaker interaction with actin allowing them to be swept towards the central SMAC by the radially constricting acto-myosin arcs. Credit: Dr. Darius Köster, University of Warwick