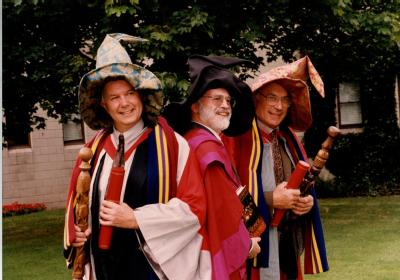 The University of Warwick has awarded an honorary degree (an Honorary Doctor of Letters - Hon DLitt) to best selling author Terry Pratchett at one of its Summer degree congregations on 14th July 1999. Just before that ceremony began Terry will also held a short ceremony to make University of Warwick researchers Professor Ian Stewart and Dr Jack Cohen the first ever "honorary Wizards of the Unseen University".


Terry Pratchett's first career was as a journalist. In 1980 he became a Publicity Officer for the Central Electricity Generating Board. However everything changed in 1983 when he had published The Colour of Magic, the first of his extremely popular Discworld novels - a series of comic fantasy books set in a disc shaped world that glides through space on the backs of four elephants which are in turn supported by a giant turtle....

In September 1987, soon after he had finished writing the fourth Discworld book Mort, he decided that he could afford to devote himself to full-time writing. He has now written a total of 35 novels (23 of them in the Discworld series) and the hard back editions of his books alone regularly sell over 100,000 copies making him a regular feature in top ten selling authors lists. The books have been turned into numerous radio plays, TV animations and theatrical productions.

Part of the reason for gaining the Honorary degree has been his recent contribution in helping to introduce his huge audience of Discworld fans to some key modern sicence concepts. This month (June 1999) he has published a book in collaboration with two University of Warwick scientists - Professor Ian Stewart and Dr Jack Cohen. Entitled "The Science of Discworld" and published by Ebury Press, the book uses the fantasy setting of the Discworld to explain the real science of our universe.

Terry Pratchett with Professor Ian Stewart (making him an Honorary Wizard of the Unseen University)
https://warwick.ac.uk/services/communications/medialibrary/images/march2013/terry_pratchett_6.jpg

From Left Doctor Jack Cohen, Terry Pratchett and Professor Ian Stewart in University robes and without the wizard costumes
https://warwick.ac.uk/services/communications/medialibrary/images/apr06/mms_74e1e39389cdf30f01966819c0722756.jpg