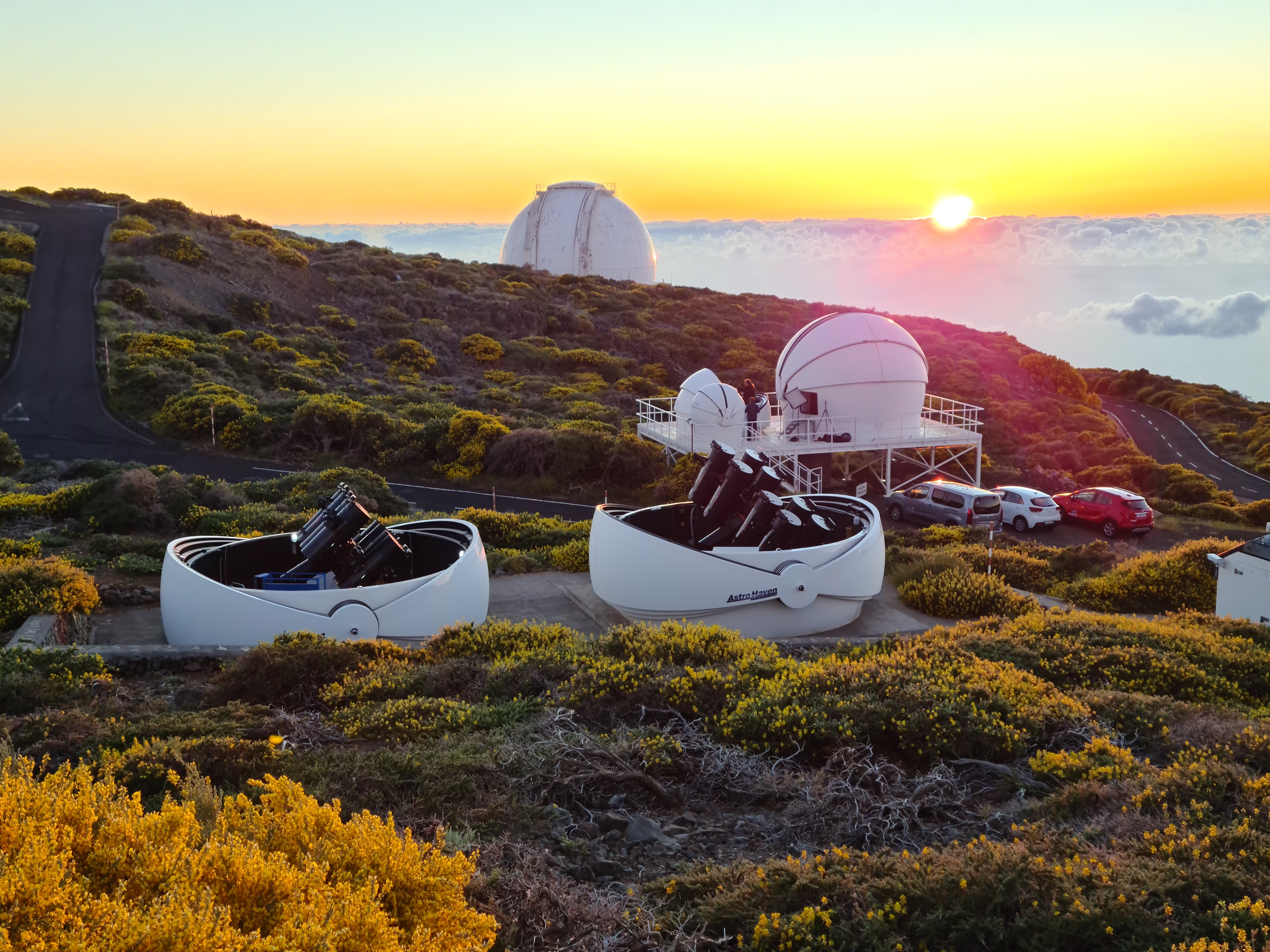 A new telescope, made up of two identical arrays on opposite sides of the planet, will track down sources of gravitational waves.

The Gravitational-wave Optical Transient Observer (GOTO), led by the University of Warwick, will help shepherd in a new era of gravitational wave science.

Deployed across two antipodal locations to fully cover the sky, GOTO will scour the skies for optical clues about the violent cosmic events that create ripples in the fabric of space itself.

GOTO began when the UK’s University of Warwick and Australia’s Monash University wanted to address the gap between gravitational wave detectors and electromagnetic signals. Now the international collaboration has 10 partners, 6 of which are in the UK.

GOTO has received £3.2 million of funding from the Science and Technology Facilities Council (STFC) to deploy the full-scale facility.

Long hypothesised as a by-product of the collision and merger of cosmic behemoths such as neutron stars and black holes, gravitational waves were finally detected directly by the Advanced LIGO (Laser Interferometry Gravitational-wave Observatory) in 2015.

Since 2015, there have been many subsequent detections but, since observatories like LIGO can only measure the effects of the gravitational wave as it passes through our local patch of space time, it can be difficult to track down the source’s point of origin.

It would be like knowing that a truck has passed by feeling the rumble in a road’s surface and trying to work out where it came from based on that alone.

Needle in a haystack

GOTO is designed to fill this observational gap by searching for optical signals in the electromagnetic spectrum that might indicate the source of the GW – quickly locating the source and using that information to direct a fleet of telescopes, satellites and instruments at it.

As most GW signals involve the merger of massive objects, these ‘visual’ cues are extremely fleeting as must be located as quickly as possible, which is where GOTO comes in.

The idea is that GOTO will act as sort of intermediary between the likes of LIGO, which detect the presence of a gravitational wave event, and more targetable multi-wavelength observatories that can study the event’s optical source.

Professor Danny Steeghs of the University of Warwick, GOTO’s Principle Investigator, said: “There are fleets of telescopes all over the world available to look towards the skies when gravitational waves are detected, in order to find out more about the source. But as the gravitational wave detectors are not able to pinpoint where the ripples come from, these telescopes do not know where to look.”

“If the gravitational wave observatories are the ears, picking up the sounds of the events, and the telescopes are the eyes, ready to view the event in all the wavelengths, then GOTO is the bit in the middle, telling the eyes where to look.”

Following the successful testing of a prototype system in La Palma, in Spain’s Canary Islands, the project is deploying a much expanded, second generation instrument.

Two telescope mount systems, each made up of eight individual 40 cm (16 inch) telescopes, are now operational in La Palma. Combined, these 16 telescopes cover a very large field of view with 800 million pixels across their digital sensors, enabling the array to sweep the visible sky every few nights.

These robotic systems will operate autonomously, patrolling the sky continuously but also focusing on particular events or regions of sky in response to alerts of potential gravitational wave events.

Professor Steeghs continued: “The award of £3.2 million of STFC funding was critical in allowing us to build GOTO, as it was always envisaged to be; arrays of wide-field optical telescopes in at least two sites so that these could patrol and search the optical sky regularly and rapidly.

“This will allow GOTO to provide that much-needed link, to give the targets for bigger telescopes to point towards.”

The future of gravitational wave science

In parallel, the team is preparing a site at Australia’s Siding Spring Observatory, which will contain the same two-mount, 16 telescope system as the La Palma installation.

The plan is to have both sites operational this year to be ready for the next observing run of the LIGO/Virgo gravitational wave detectors in 2023.

If astronomers can locate convincing counterparts to gravitational wave signals, it will be possible to measure distances, characterise the sources, study their evolution and determine the environments they are formed in.

Professor Steeghs added: "The hope is to catch the event quickly, then follow it as it fades, and also to trigger an alert to other, bigger telescopes so they can all collect more information and we can build a really detailed picture of these astronomical phenomena.

“It is a really dynamic and exciting time. In astronomy we are used to studying events which are millions of years old and aren’t going anywhere – this is a fast-paced, very different way of working where every minute counts.”