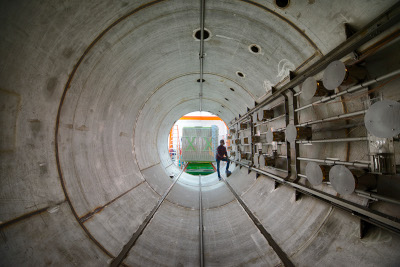 Results from a global science experiment involving a University of Warwick scientist have cast doubt on the existence of a theoretical particle beyond the Standard Model.

The existence of the theorised particle, known as a sterile neutrino, is considered a possible explanation for anomalies seen in previous physics experiments.

The results were gathered by an international team at the MicroBooNE experiment in the United States, with leadership from a UK team funded by the Science and Technology Facilities Council (STFC). The project involved expertise from the University of Warwick’s Department of Physics, who developed sophisticated software called the Pandora package to analyse the detailed images of neutrino interactions recorded by the MicroBooNE detector.

For more than two decades, this proposed fourth neutrino has remained a promising explanation for anomalies seen in earlier physics experiments. In these previous experiments, neutrinos were observed acting in a way not explained by the Standard Model of Physics – the leading theory to explain the building blocks of the universe and everything in it.

Neutrinos are the most abundant particle with mass in our universe, but they rarely interact with other matter, thus making them hard to study. But these elusive particles seem to hold answers to some of the biggest questions in physics – such as why the universe is made up of more matter than antimatter.

A 170-ton neutrino detector the size of a small bus was created to study these particles – and became known as MicroBooNE. The international experiment has close to 200 collaborators from 36 institutions in five countries, and is supported by STFC in the UK.

These results mark a turning point in neutrino research. With the evidence for sterile neutrinos becoming weaker, scientists are investigating other possibilities for anomalies in perceived neutrino behaviour.

Professor Justin Evans, from the University of Manchester, is co-spokesperson of the experiment, and has been leading this analysis for the past two years.

He said: “What we have achieved here with MicroBooNE is a transformative step for the field of neutrino physics.

“We have studied, with exquisite precision, the interactions of neutrinos traveling over short baselines; and we have revealed a clear picture in which we see no suggestion of a fourth neutrino.

“This heralds the start of a new era of precision for neutrino physics, in which we will deepen our understanding of how the neutrino interacts, how it impacted the evolution of the universe, and what it can reveal to us about physics beyond our current Standard Model of how the universe behaves at the most fundamental level."

The UK at MicroBooNE

The UK has taken a leading role in MicroBooNE, leading the development of state-of-the-art pattern recognition algorithms, making world-leading contributions to the understanding of neutrino interactions in the argon, and bringing a broad range of expertise to these searches for the elusive sterile neutrinos.

Dr John Marshall from the University of Warwick Department of Physics said: "An exciting aspect of MicroBooNE is the liquid argon detector technology it uses. This allows fantastically detailed images to be captured of the paths of charged particles produced in neutrino interactions. The University of Warwick’s involvement has been to lead the development of the Pandora pattern-recognition software, which was responsible for analysing these images for multiple MicroBooNE physics analyses. Based on the images, the software needed to ‘reconstruct’ what actually happened in the complex neutrino interactions. It’s extremely rewarding to see the software play its role in delivering the results today."

Dr Andrzej Szelc, from the University of Edinburgh, is the UK PI of MicroBooNE. He said: “The strange results from previous experiments have puzzled theorists and experimentalists alike for many years.

“Now that we have seen no hint of a fourth neutrino, we have to take a step back and try to figure out what could be happening. These kind of seemingly contradictory results have often led to great breakthroughs in the past, so this is an exciting time to be a neutrino physicist.

“The MicroBooNE results would not have been possible without the contribution of UK scientists, post-docs and crucially post-graduate students, who have made key contributions to the commissioning and operation of the MicroBooNE detector as well as the development of its simulation and reconstruction software.”

With our understanding of neutrinos still incomplete, the UK through STFC has invested in a science programme to address these key science questions, as well as invest in new technologies.

The UK government has already invested £79 million in the Deep Underground Neutrino Experiment, Long-Baseline Neutrino Facility (LBNF), and the new PIP-II accelerator, all hosted by Fermilab.

This investment, delivered by STFC, has given UK scientists and engineers the chance to take leading roles in the management and development of the DUNE far detector, the LBNF neutrino beam targetry and PIP-II accelerator.

Professor Mark Thomson, Executive Chair of STFC and one of the first UK physicists to join MicroBooNE, said: “This much awaited result is a significant step our understanding of neutrinos. This extremely challenging measurement is also important in that the MicroBooNE experiment used a new technology to record detailed images of individual neutrino interactions.

“The successful use the liquid argon imaging technology is a major stepping stone towards DUNE.

“Once complete by the end of this decade, DUNE will use several detectors each of the size of an extra-deep Olympic swimming pool, but with liquid argon replacing the water, to measure the movements and behaviours of neutrinos.”

The results will be announced at a scientific seminar on October 27, at 10 am CT/US: First search for an excess of electron neutrinos in MicroBooNE with multiple final-state topologies. The seminar will share the measurements of three electron analyses and put the results in context. (A seminar on October 1 revealed the photon analysis).

The additional materials provided by Fermilab: