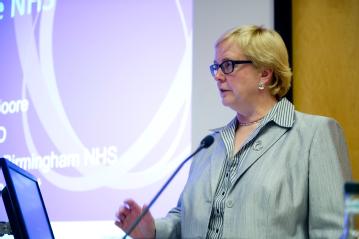 It was announced today, Thursday 26th April 2018, that Dame Julie Moore, currently Chief Executive of University Hospitals Birmingham NHS Foundation Trust (UHB), is to become a Professor of Healthcare Systems at WMG, University of Warwick. Her new role will see her leading on a range of both research and education projects, leading collaborations with the NHS and other healthcare providers.

Dame Julie has held the position of Honorary Professor, at WMG, since 2013. In that time she has delivered three thought provoking and informative special lectures covering topics such as ‘Is the NHS Succeeding or Failing?’.

“This is a stellar appointment. Nursing Times has described Dame Julie one of the best leaders in the NHS, and Radio 4’s Woman’s Hour has named her as one of the 100 most powerful women in the UK. I have no doubt that her new research role here with us in WMG at the University of Warwick will result in transformative research that will help enhance the delivery of healthcare across the UK.”

“I am extremely delighted that Dame Julie is joining WMG. Her extensive experience within the NHS, and healthcare sector, will help us to develop new collaborations and initiatives, especially around the productivity of healthcare systems.”

Dame Julie Moore, who last week announced her decision to retire from UHB later this summer, added “I am thrilled to be joining WMG and Warwick University and having this opportunity to continue improving healthcare in this new venture”.

Dame Julie is also a Director of the Prince of Wales's Charitable Foundation. She spent ten years as a nurse in clinical practice before moving into nursing management. She became a director of Leeds Teaching Hospitals NHS Trust in 1998. In 2002 she moved to Birmingham, taking up her current post in 2006. She was made a Dame Commander of the Order of the British Empire in the 2012 New Year Honours and was one of the top ten Chief Executives in the NHS in 2013 according to the Health Service Journal. In 2015 the Health Service Journal judged her as the third to top Chief Executive in the National Health Service, and in 2016 the second.