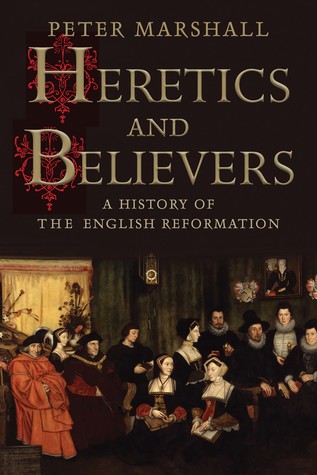 Professor Peter Marshall, of the University of Warwick's Department of History, has won this year’s Wolfson History Prize with his book Heretics and Believers: A History of the English Reformation

This year’s winner was selected from over 150 books by a panel of four eminent historians. Expert in Islamic history, Professor Carole Hillenbrand, of the Universities of Edinburgh and St Andrews, joined the judging panel this year alongside Professor Sir David Cannadine (Chair), Professor Sir Richard Evans and Revd Professor Diarmaid MacCulloch.

In writing Heretics and Believers I wanted to take a defining episode of England’s past and invite people to view it in a different way. ‘Narrative’ history sometimes gets criticised as naïve or unambitious, yet I deliberately chose a chronological and descriptive approach in order to underline the interconnectedness, as well as the open-endedness, of events – and to try to capture the lived experience of people with no idea of how things would finally turn out.

“The challenge – which I hope I managed to meet – was to acknowledge the complexity without sacrificing clarity. Monarchs, martyrs, bishops and theologians, the great and the (sometimes) good, play their parts in my story. But I also wished to give full voice to the fears and hopes of ordinary women and men.

“A paradox near the heart of my account is that while English people often experienced religious change as coercive and traumatic, the Reformation simultaneously educated and empowered them, and recast the relationship between rulers and ruled.”

Professor Sir Richard Evans, who presented the Prize on behalf of the judges said:

‘Appearing on the 500th anniversary of Martin Luther’s launching of the European Reformation in Wittenberg, this is a sweeping retelling of what we thought was a familiar story. How wrong we were. Covering every level of the lived experience of the Reformation, from the policymakers to the ordinary parishioners in the Tudor countryside, Peter Marshall shows how Henry VIII’s actions opened a Pandora’s box from which violent confrontation and religious diversity emerged to shape the destiny of modern England.’

Paul Ramsbottom, Chief Executive of the Wolfson Foundation which awards the Prize said:

‘The Wolfson History Prize celebrates outstanding, accessible history writing. We offer our warm congratulations to Peter Marshall who joins a remarkable rollcall of winners dating back to 1972. His wonderful book about the English Reformation is beautifully written, extensively researched and ambitious in its range. It helps us to look at this turbulent, pivotal period in fresh ways.’

The Wolfson History Prize, which is awarded annually, recognises and celebrates books which combine excellence in historical research with readability for a general audience.

A strong supporter of the Arts in Higher Education, the Wolfson Foundation has to date supported at the University of Warwick six cohorts of Wolfson Scholars in the Humanities and has awarded almost £10m to the University since its foundation - including £2m to support the Mathematical Sciences Building.