• Was the intellect behind health screening in the UK

One of the UK’s foremost health pioneers has been awarded a Hon DSc (Honorary Doctor of Science) from the University of Warwick. 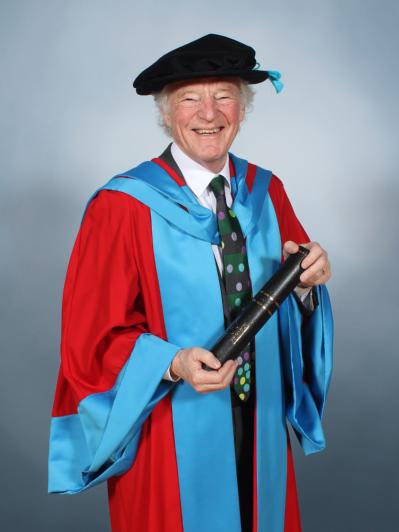 Professor Sir Muir Gray has worked for the National Health Service in England since 1972, occupying a variety of senior positions during that time, including serving as the Director of Research and Development for Anglia and Oxford Regional Health Authority, and first establishing and then being the Director of the UK National Screening Committee. This week (18 January 2018) he was presented with an honorary doctorate during the University of Warwick’s winter graduation ceremony.

Sir Muir founded the National Library for Health, and was the Director of Clinical Knowledge, Process, and Safety for the NHS (England) National Programme for IT, serving as the Director of the National Knowledge Service. He was the first person to hold the post of Chief Knowledge Officer of the NHS (England), also serving as the co-Director of the Department of Health’s Quality Innovation Productivity and Prevention (QIPP) Right Care Programme. Together with Sir Iain Chalmers, Muir was instrumental in establishing the Cochrane Collaboration.

Speaking just before he received his new honour he stressed the importance of the University’s Warwick Medical School and other medical schools will play in the future of the NHS. He said it is essential the doctors of tomorrow are instilled with two vital qualities: “Empathy is the most important – that feeling of support for the individual in difficulty.

“And to feel responsible for resources; we have to feel we are stewards of the NHS if we don’t look after it it won’t be here in 30 years’ time.”

On Warwick Medical School he added: "The campus has lots of good disciplines so I very much hope it will expand in the years to come and we will see even more activiyt coming out of Warwick."

Sir Muir is an internationally renowned authority on healthcare systems and has advised governments of several countries outside the UK including Australia, New Zealand, Italy, Spain and Germany. He is also a Visiting Professor in the Nuffield Department of Surgical Sciences at the University of Oxford. He received the CBE in 2000 and was knighted in 2005 for services to the National Health Service. Professor Sir Muir Gray is a pioneer in his chosen field of Public Health but his influence and expertise extend far beyond the narrow confines of the Public Health specialty.

Professor Muir Gray has led the NHS through a huge number of changes. He pioneered walking as a health improvement activity. He was the intellect behind the drive by Simon Stevens, the Chief Executive of the NHS to improve the health of those working in the NHS. An example of Sir Muir Gray’s work is in setting up the National Screening Committee (NSC). The NSC is the envy of the world because of its influence and power and also because of its commitment to the evidence base in screening decisions (these are decision which affect the lives of millions of people).

Sir Muir Gray has brought Health Care Public Health into being. This has revolutionized the way that NHS approaches ‘health’ as opposed to disease. More recently Professor Gray has turned his attention to keeping healthy and active as we age. He has produced two highly successful and popular books ‘Sod Seventy’ and ‘Sod Sixty.’ These books are typically innovative in the way that Muir has approached how to keep active and healthy into later life.